The Frankston line X’trapolis – are you impressed?

You’d think from the tweets from Coalition MPs this morning that the arrival of the first X’trapolis train in service on the Frankston line was a miraculous huge leap forward for train travellers — a rocket-powered, laser-guided teleportation device that can get you to your destination in seconds.

Great to travel in the new X'Trapolis train on the Frankston line today! pic.twitter.com/8Fz1tAWHw1

It’s a bit like the Danger Mouse theme tune: “He’s the ace / He’s amazing / He’s the strongest, he’s the quickest, he’s the best!”

X’Trapolis trains are the newest, biggest and fastest trains on Melbourne’s network. Running this train on the Frankston line will reduce crowding and get more people out of their cars and onto public transport.

The truth is a little more nuanced. 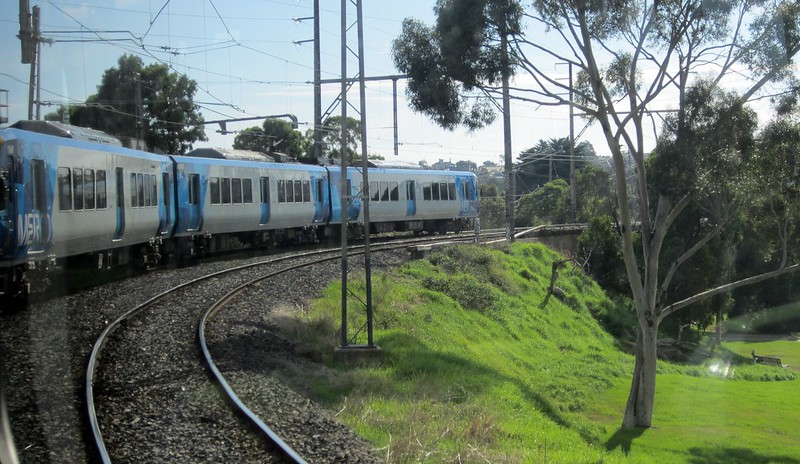 Are these trains better?

So the claim is that these trains are bigger, faster, quieter and smoother.

Bigger? I’m not sure of the logic behind that. The trains are a similar length, and with a similar number of seats to other models, and a similar total capacity.

Quieter? I’m not sure there’s that much in it.

Smoother? Arguably not. Many people have complained about the ride quality of the X’trapolis trains, though some of this is due to track conditions, especially on the outer semi-rural ends of the Hurstbridge, Lilydale and Belgrave lines. Some train drivers have complained of getting back problems.

The newest X’trapolis trains do have very clear destination signs, and many more handles inside to hold onto if you can’t get a seat.

They also have slightly fewer seats, making an arguably more efficient layout, allowing people to move in and out and around the carriage more easily. And they have big bold interior displays, though these are obscured by the handles! 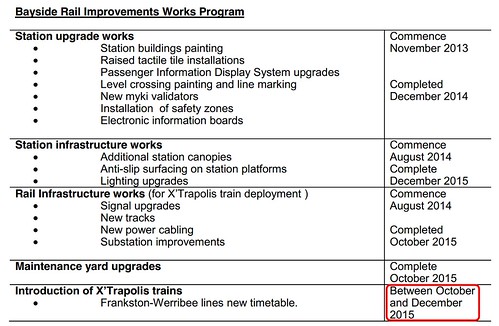 Was their rollout rushed?

Clearly yes. The original estimate was that these trains wouldn’t start on the line until around October 2015. But of course, that’s well after the election, so they’ve brought it forward by an entire year.

As noted by Channel 7 on Monday, and The Age on Tuesday, there is just one X’Trapolis train deployed onto the Frankston line. It has been specifically speed-limited so as not to accelerate towards still-closing boom gates too fast, and has two drivers in the cab as a precaution.

The train seems to run just two round trips each morning, both timed to avoid the height of peak hour (so making poor use of the claimed additional capacity) before heading to sidings at Burnley for the rest of the day.

So will people be impressed?

It’s a publicity stunt, nothing more.

Yet I know some people suffer from train envy — I remember a friend from the then Epping line saying he wished they got the Siemens trains. Perhaps he wouldn’t have wished that had he seen the often filthy state of the seats.

But ask someone who regularly catches these trains if they’re anything special, and I doubt they’ll go over-the-top in praising them — they’ve had this model for years now.

In any case, it seems not everyone was impressed:

I suppose it’s good the politicians (who hold the purse strings) are so interested in public transport. But it’s important that the money isn’t all put into show ponies like “new” trains which aren’t really new, but into ensuring the whole system is frequent, reliable, fast, clean, and safe.

22 thoughts on “The Frankston line X’trapolis – are you impressed?”