After buying the new livingroom hi-fi, my thinking was I want a device for the kitchen that does DAB+ for digital radio (eg music such as Double-J without relying on the vagaries of the internet connection) and can also do AirPlay (eg for music from iTunes on the Mac).

Devices that do both DAB+ and AirPlay in one kitchen-sized unit seem to be extremely scarce. The only one I’ve found was sold by Panasonic back in 2012: the SC-HC57DB, which also plays CDs. You can’t buy these new now, but you can find them secondhand and refurbished. That particular model had mixed reviews.

Okay then, what about concentrating on DAB, but also with network access to stream music via protocols other than AirPlay?

Pure do some nice radios. I looked through reviews and compared models — whose names are very confusing. I particularly like the one done up as a Marshall amp… with a Volume knob that goes up to 11.

I went out looking for Pure radios in the shops at lunchtime. 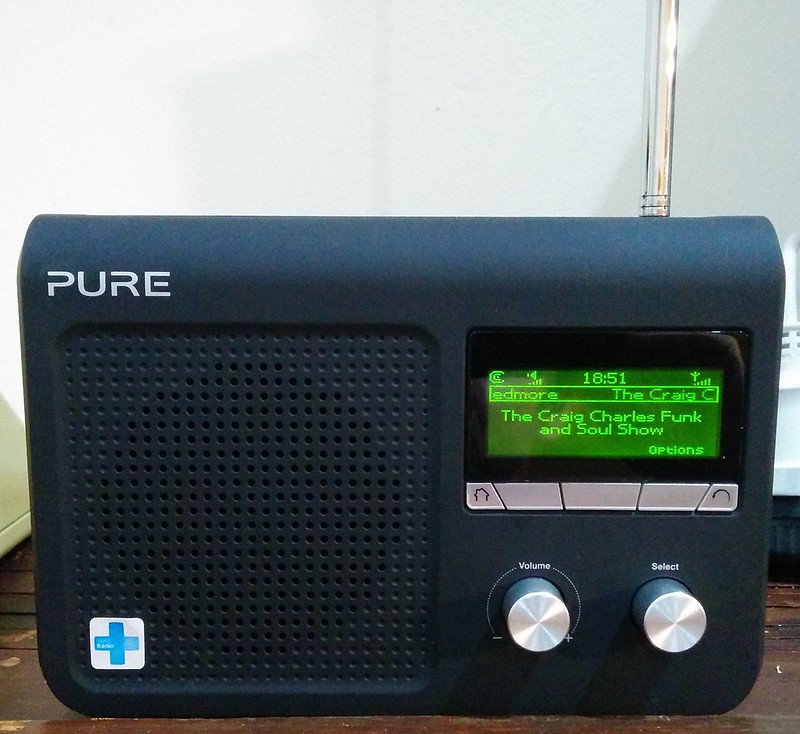 The Pure web site has a store locator which they might as well shut down (at least temporarily), as its data is hopelessly inaccurate. It says Big W and Target stock their products. I couldn’t find any. (In fact Target has moved to their own in-house hi-fi gear. Hmmm yeah… probably not the ultimate in high fidelity. $99 Target soundbar, anybody?)

It says Myer and DJs stock them too. This seemed more likely, but neither had any on display. It listed a store called Volume in Melbourne Central, which has closed.

The store locator doesn’t list Dick Smith, yet they did have some of their radios on display at their Emporium store, and happily in a spot where you could play around and listen to them. JB Hifi is listed, and do have them, but only a couple of models. Ditto Harvey Norman.

After researching the various models, I ended up deciding on the Pure One Flow, which gets good reviews — What Hi-Fi gave it 5 stars and the only down side they listed in the summary was it was “not the sexiest-looking radio we’ve ever seen”.

Given the lack of retailers stocking it, I looked online — a mob called WebRadios in Melbourne, who mysteriously only sell four products, had the best price. It arrived within a day or two.

Pure appear to have some skilled designers in product development — taking a leaf from Apple’s book, even the box was beautiful. 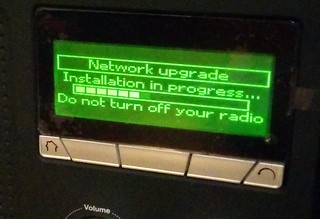 Once plugged-in and running, the radio wanted to patch itself when it was fired up, which I found amusing. Once done, it’s worked well, and is excellent for music from the kitchen, though it can go loud enough to be heard from most of my small house. Mono, but a good quality sound (to my unqualified ear).

Because I’m a geek, I deliberately got a model with network capabilities, though I haven’t fully explored them yet — beyond controlling it with my mobile phone, including piping music into it from the phone, and testing out streaming from a couple of exotic overseas radio stations. Neato.

If I really desperately want AirPlay, it does have an input, so I can add an AirPort Express. What I find more appealing through is that, if I get severe Sonos-envy, it can be part of a Jongo network of synced speakers (Pure’s probably not-quite-as-advanced version of Sonos), which can link through to an existing stereo via the Jongo A2 adaptor.

All in all though, I’m liking this new radio.

The other thing I’ve discovered while looking through the digital radio broadcasts is that I probably prefer the dinosaur music on Triple M Classic to Double-J.

Interesting review. Does it run on mains or batteries? How long would batteries last if you had it on 12 hours a day? It looks too big to put in your pocket if you were gardening – or is it pretty portable? thanks

@Roger, most of this company’s radios are too big to be pocket-sized, but you could put it on a garden bench. It’s mains-powered – that’s what I bought it for; to sit in the kitchen.

That said, while you can’t put conventional batteries into it, the radio can take a proprietary rechargeable battery pack sold by Pure (it fits into a lot of their radios).

Is that BBC6 I see in the first pic?

@Tony, it is! It can stream live radio (including BBC 6), and also has access to podcasts. I’m not sure how it does that; I thought it was magic, but it seems to be curated by the Pure support people… being a UK company, they seem have something of a UK-bias… though so do I, so I have no problem with this.

That said, they have streaming radio from many different countries, not just the UK by any means.

As an aside, Pure seem to have their own radio streaming infrastructure/management. Many other brands (including Yamaha, whose stuff I bought for my livingroom) use a service called vTuner. http://vtuner.com/partners/

My Kogan DAB/internet radio has podcasts from the BBC too and an internet radio management service, although I’ve only ever looked at it. I’d like a radio with TuneIn integration as that’s what I use on my phones and tablet.

thanks Daniel. I’ll continue to use my Sony trannie while in the garden which fits in top pocket. All I listen to is the footy or cricket on the ABC.