As I walked to the station this morning there seemed to be an unusually long tailback of cars approaching the level crossing.

I found a gaggle of reporters at the station, and shortly afterwards state opposition leader Dan(iel) Andrews showed up, with public transport spokesperson Jill Hennessy and local Bentleigh candidate Nick Staikos, to announce Labor will grade separate the Centre Road crossing if elected. 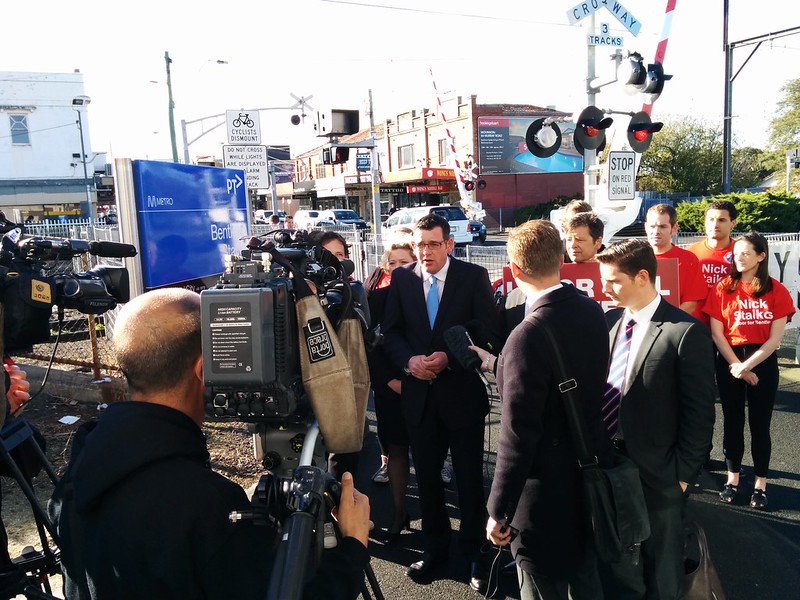 It’s part of Labor’s scheme to remove 50 level crossings over 8 years (two terms). They had announced 40 based on the official ALCAM (Australian Level Crossing Assessment Model) risk ratings, and said they’d announce another 10 in due course… closer to the election.

Evidently the first of those ten is Bentleigh, which is slap bang in a marginal seat, though this doesn’t mean it’s not deserving — in the 2008 ALCAM list (it appears this is the most up-to-date one that has been completed), it sat at number 60. Since then, numerous others in the top 50 have been completed or funded, and there are many more still are in Labor’s first 40 — though I haven’t yet checked if they are all included.

I couldn’t stay for the full press conference (alas, I had a train to catch), but Daniel Andrews said they wouldn’t comment on costings for individual crossings, as they didn’t want to flag to contractors how much they’d be willing to pay. Costings are a hot issue — St Albans has set a record at an estimated $200 million, but some other recent, less complex, crossings have been much much cheaper — for example Middleborough Road (including a new Laburnum station) was $66 million in 2007. And the Springvale and Blackburn crossings completed earlier this year were three for $350 million, or an average of $117 million each — and you’d expect economies of scale to drive prices down if you were doing 50.

I think most locals will welcome this pledge. It’s not just traffic (including buses and cyclists) which is frequently delayed — people walking to and from the station often have to wait… though the programming of the gates sometimes sees long delays for distant approaching trains, and some people lose patience and skip around the gates.

And though it’s not as big a problem as it is at Clayton, it’s not unknown to see emergency vehicles having to wait as well.

Along with other grade separations along the line, it allows more trains to run without impacting local road traffic.

Bentleigh also has a less than stellar record for safety, with a number of fatal accidents over the years — though fewer since the pedestrian gates were upgraded. Click here for an interactive timeline created by Amy Foyster — five fatalities in the last decade.

But the pledge raises a question: given North Road is funded to be grade separated, would Labor propose to do Mckinnon Road as well? It’s midway between them, only 800 metres from North Road, and 800 metres from Centre Road. Unless all three are done (preferably as one project, to save money and minimise disruptions) the line could resemble a roller coaster, and play havoc with the freight trains, which already have problems getting up the hill northbound into Ormond.

The local Leader newspaper is seeking comment from sitting Liberal member Elizabeth Miller on the crossing. Nothing yet.

2+ min gaps between trains while gates stayed closed. About 8 people went around them to try and catch the train. #Bentleigh #Dangerous

Update 24/9/2014: Level crossings: Which are funded to be removed, which are promised? (McKinnon was subsequently pledged by Labor.)

Oh god yes. Do all *four* in one go: remove that tram crossing at Glenhuntly (and five, Glen Eira Rd), then North Rd, which isn’t actually the *worst* crossing ever (even if I have to run across the road in peak traffic a lot… hey, it can be fun :/ ) given that the traffic is often held up by Grange Rd anyway, McKinnon Rd because it is so close, and Bentleigh. I have been surprised Centre Rd hasn’t been near the top of dangerous crossing lists, given the number of deaths. It isn’t that it is a particularly “unsafe” design compared with any others, it is that pedestrians seem to be impatient and have made accidental fatal decisions in the past. But this alone shows that people there (or in the area) are making risky decisions, and should be reflected in the risk modelling.
If you do all the crossings together, the shutdown and delays would be huge, but the project would be over and done with in one foul swoop. It would also mean there’s no level crossings on the Frankston line between the city and Moorabbin, which is a good start to fully-separating a long length of a line, allowing for more services.
For Frankston, I think it gets a lot harder to fully-separate further down the line. Highett isn’t hard, but Cheltenham and Mordialloc will be very difficult (and Southland Station will “get in the way” probably, unless it ends up being a rollercoaster line).
It’s a bit like Metro’s self-profiting plan to “upgrade” the Dandenong Corridor. Unless you do *all* the crossings, you don’t get the full benefit. That project is just too short-sighted. Two track upgrade, with four out of seven inner-suburb crossings removed (and none of the outer suburb ones done)? Given the line, its length and its needs for VLine and freight use, the line to Dandenong really needs to be four tracks (or more if they ever build their stupid port) with consistent express services *too* (Dandenong is meant to be an important centre for employment and development, right?), along with very frequent stopping services, and additional capacity for Rowville services. Short-sighted, but such expense and huge construction means the changes are locked in for a generation. Be better to spend a bit more and get it completely right in one hit. But then it wouldn’t be so profitable, right?

Ok, they should do mckinnon too and put a park over the top of the hole where the train is

Agree with doing the crossings as a group where possible. Hard to see how it isn’t cheaper and more efficient overall than doing them one by one over years, if not decades. One of the mysteries for me with the adding of double track from Clifton Hill to Westgarth a few years ago is why they didn’t decide to eliminate the crossing just on the city side of Westgarth, if not the one just on the city side of Clifton Hill as well.

Once North Road gets done, I would trust that many who currently use Center road, may in fact use North Road in stead. I would love to see the traffic impact on other roads once that project gets done.

It would make sense to grade separate the whole section at one go. Just hope they remember to build four tracks this time.

Interesting to see how some of the listed stations mentioned would be achieved. Werribee Station (Cherry Street) & St Albans (Main Road West) for Example. RRL could not put rail under road between Albion and Sunshine stations due to grading. As a result 5 houses on Anderson Rd (Between Ridley St & King Edward Ave) lost vehicle access to their driveways.

Why do the gates have to be closed so long before a train arrives anyway?