Those LED automated signs on station platforms are known in the biz as Passenger Information Displays, or PIDs. In recent months they’ve been installed at a lot of stations along the Frankston line.

They’re handy because they provide you with realtime departure information, without having to press the Green Button, which often doesn’t work or takes ages to get to the vital bit of information: how many minutes away is my train? PIDs are also useable by the deaf and hard of hearing.

At Frankston line stations with more than 2 platforms, they’ve concentrated installing them on the “island” platforms — if the budget is limited, this makes sense at stations such as Ormond and Bentleigh, where most trains (and most passengers) use those platforms. Few use platform 3. 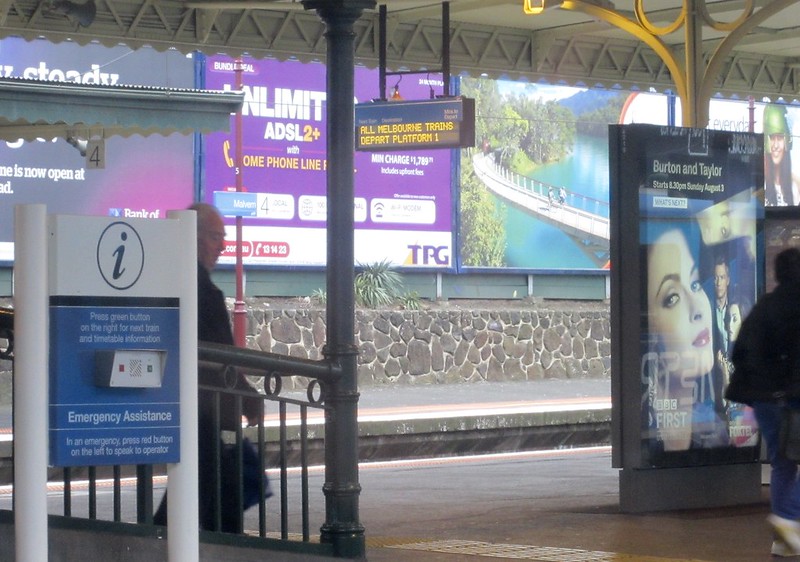 It appears someone decided the “island” rule should apply at the MATH (Malvern, Armadale, Toorak and Hawksburn) stations. So at Malvern, some months ago, PIDs were installed on platforms 2+3. At Armadale and Hawksburn, they’ve been installed on all four platforms. (Toorak doesn’t have them at present, so I guess I should have said MAH.)

This is because stopping patterns are being standardised so that Dandenong line trains generally run express Caulfield to South Yarra. Consistent patterns make a lot of sense — they are more predictable, and can be shown on maps — and the Dandenong line has been prioritised for expresses because it carries more people than the Frankston line, serves more growth areas, and it also carries express V/Line trains. In the future I wouldn’t be surprised if no trains stop on platforms 3+4 except under unusual circumstances (such as a disruption on the other tracks).

So the signs are either left blank most of the day, or showing a message telling you to go to another platform.

This could be done with a cheap static sign — if needed at all. All these stations have automated displays up on the concourse which direct you to the correct platforms.

There are scores of stations, and hundreds of platforms around Melbourne that are still without PIDs. What an appalling waste of money to install them where they’ll almost never be used.

Update 28/8/2014: In the past week or so, PIDs have been installed at Malvern on platforms 1 and 4, though they are not yet in use. Perhaps this post was something of a premature rant about a non-problem!

@Marcus, ah yes, quite so! Let alone the ones in the Elizabeth Street subway, which are so high up almost nobody even notices them: http://www.ptua.org.au/2011/06/06/potd-fss-auto-signs/

Also there used to be signs in the stairs to the Degraves St subway that indicated whether that exit was open or not. They (at least on some platforms) seem to have disappeared recently.

Daniel, I’m sure PTV wouldn’t have spent all that money unless they knew what they were doing. (ha ha)

“What an appalling waste of money to install them where they’ll almost never be used.”

What an appalling waste of money to remove services from key inner-city stations. The PTV, govt, (possibly the PTUA, I don’t know) seem to be under the misapprehension that the MATH stations can afford to have services stripped because they have transport options.

So peak services have been removed.
There are no staff-members present any longer.
What seating capacity there is now, will be non-existent come Jan 1 2015.

The same things are happening to stations all over the inner city and it is a stupid, unfair and dangerous strategy.

Maybe the person who decided to put the PIDs on the platforms 3 at the MATH stations was thinking of the old days (until about 2011) when most evening and weekend trains used the middle tracks between Caulfield and Richmond?

I think you’re being a bit harsh here. I don’t know the cost breakdowns, but I can imagine once a crew is on site, wiring has been provided etc. to provide PIDS on one platform the marginal cost of installing on others would not be that high.

And while PTV may have a sensible plan for future operations, there is not track record of following said plan, so stopping patterns can and possibly will change.

I had a short chat with some of the guys who were doing the installation work at one of the MATH stations. They made it clear that they were under pressure to get the job done. Sounds as though the planning was rushed, too. Oh, is there an election due in November? What a coincidence!

It isn’t a waste of money. Any station where trains can turn up on any platform should have screens on all platforms, and that is what they are rolling out in that section.

Also, Frankston line trains end up stopping on those platforms at MATHS stations a daily basis, so it is definitely worth the money.

Think you are wrong here. Metro disruption planning & associated timely information is a major problem. Having PID’s on all platforms will help & in fact be more useful when things go wrong.

All PID’s would be improved if they showed both the next train & the following one. If I’m faced with an overcrowded train (often as a result of some disruption) & the PID shows the next train is 2 minutes behind, I’m less likely to cram-on & delay the first one.

Another option to fully utilise the PID’s on platforms 2/3 is to change all inbound Frankston trains to express & all inbound Dandy trains to stoppers. Could then get rid of myki machines in platforms 1 & 4 as well!

@Antony, @Flanders, @Alasdair, you might have a point if they’d put PIDs on all platforms at Malvern, but they haven’t. They’re on 2+3 only, with 2 getting plenty of use, and 3 almost unused — as you can see from the photo, it’s platform 1 which should have got it.

And while catering for disruptions is a good point, it still doesn’t mean that platforms that get trains only a few times a day plus once in a blue moon during a problem are a higher priority for the many platforms around the network that get many more trains every day of the week.

And at the risk of repeating myself: the MATH stations all have automated signage on the concourse, which are capable of pointing you to the correct platform if there is a change. (Well, in theory.)

I do not mind having PIDS on a platform that rarely gets a train, BUT, when you have other platforms at the same station which does not have a PIDS and is on a used platform, then it is a dumb mixup for sure.

Having said that, I wonder if there are plans to swap the two Up tracks. that is have Up Frankstons use the middle one and Up Dandenong using the side one?

The way in which the land has been cleared right on the Caulfield Junction could suggest they seek to swing some track(s) around a bit, to perhaps create a grade separation of a kind at that junction?

Swapping the Frankston and Dandenong city-bound services` tracks would have some advantages. It was part of the 1969 Melbourne Transportation Plan but was cut from the City Loop project (a bad cut).

The main advantage would be at Richmond where there would be cross platform transfer between loop and stopping services on the Caulfield group, like there are on the Burnley group. This could allow loop services to be removed from the Frankston line, allowing the full capacity of the Dandenong line to be used for Dandenong line services.

There would also be an advantage at the MATH stations because all passengers would be using the island platforms.

I do not think however that building the 2 flyovers required (one at Caulfield and the other between Richmond and Flinders St) and resignalling the middle tracks between these flyovers is on the PTV`s to do list.

Also I doubt that those two houses were demolished for a reorganisation of the tracks from Caulfield to Richmond. There was going to be a block of flats built there but it seems to have fallen through. It may have been purchased under the previous state government when the proposed metro rail tunnel was to be built to Caulfield.

There is not really enough room for a flyover on the junction side of Caulfield, especially with the Queens Avenue underpass. There does seem to be plenty of room between Caulfield and Malvern though.

Daniel, you know very well that Malvern is a work in progress, especially considering you’ve been following the rollout at the other MATH stations. Surely you don’t think that what is there now is the permanent state of affairs? Especially when it is by far the busiest of the four stations.

There could be multiple reasons for Malvern (and other locations) only getting two at first and then getting the other two later. One example could be that unlike the other MATH stations, Malvern’s station building is fully occupied (it is a full time authorised officer depot), meaning that they’ve had to put the electronics for the system someplace further away than expected and thus ran out of cables or wiring to complete all platforms in one go. Meanwhile they may have the correct amount of equipment to complete x-number of other stations, so move on to those, and then fix Malvern later on. That’s just my guess, it may or may not be correct, and there may be a better explanation for it.

Number of trains alone shouldn’t be what justifies whether a location gets PIDS. Many places have consistent running, ie: an up and a down platform, trains always turning up in the same place, regardless of how many trains there are. PIDS wouldn’t be as necessary in this scenario, but would be nice to have nevertheless.

Malvern, and the other MATH stations, don’t fall in this category. At these stations, trains to Frankston or Dandenong can turn up at either platform 2 or 4 at a moments notice. Similarly, trains to the City on either 1 and 3. Whether it’s no alterations on a good day, or a small handful of trains on a regular day (most days fall in this category), or all trains on a bad day, all platforms should cater for it. This is why all platforms at these stations should have them as a priority.

In fact, any station that has this situation should get them (ie: 3-4 track sections). As should any platform where trains can arrive in either direction (ie: Werribee line which is bidirectional, or the various single lines around the system).

Just tonight, all trains were using only two tracks between Caulfield and Richmond due to track works, and the PIDS were seeing a lot of use.

I think it’s a bit quick to be jumping the gun and claiming that something which improves information provision and customer service, and is obviously only partially rolled out, is a waste of money. This sort of stuff should be encouraged by PT advocates, not discouraged by them. And besides, it probably costs a fraction now of what it did when this technology was first rolled out many years ago.

And just a further FYI. While I know your post is referring specifically to the Frankston line, there is an ongoing program to install PIDS at various stations around the entire system. I’m not sure what the extent of the program is or will be, but over a dozen stations have received them so far within the last 8 months.

And to everyone else, I hardly think that putting 2 PIDS at one station with 4 platforms means they’re about to swap the direction of tracks in that section or build a web of flyovers further down the line. C’mon guys. Don’t read too much into it.

All MATH platforms now have PIDs. None are yet commissioned at Toorak
and Hawksburn 4, Armadale 4 and Malvern 1 & 4 are also yet to be
commissioned.