Melbourne Rail Link: has it been properly planned?

As I’ve written already, both the Metro Rail Tunnel and the Melbourne Rail Link provide similar benefits in terms of rail capacity in the central part of Melbourne’s rail network. In those terms, they are roughly equivalent.

But MRL does have problems. For example, I think it connects the wrong lines.

Both MRL and the Metro Rail Tunnel (I’m going to abbreviate it as MRT, in lieu of another convenient acronym) create an extra track pair through the city, connecting two existing lines together, freeing up capacity elsewhere. The whole idea is to isolate rail lines, to let them run independently.

MRT does it by connecting the Sunbury and Dandenong lines through a tunnel via Domain and Parkville, creating a cross-city connection.

MRL does it by connecting the Frankston and Ringwood lines through a tunnel via Montague and the City Loop, creating a connection from the south to the east, via north and west of the CBD.

Such a connection has obvious impacts on passenger movements. Let’s look at one example: Richmond. 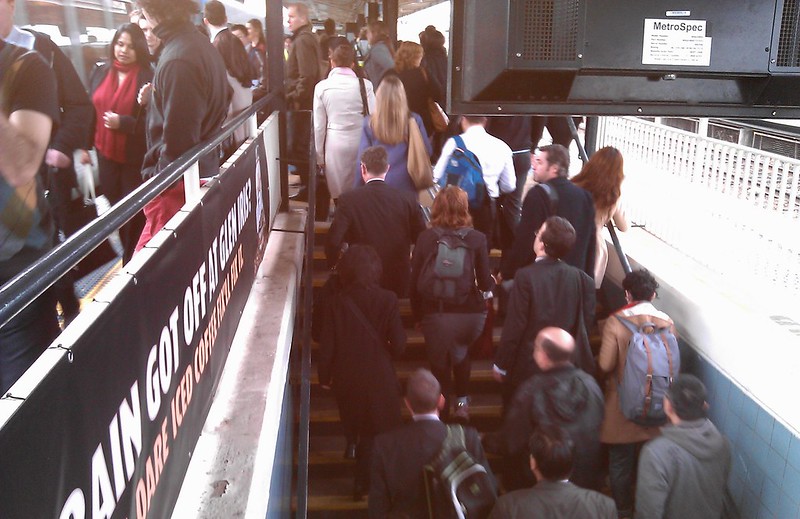 Does anybody want to take the long way around?

Richmond is a major interchange, but isn’t significant as a destination at peak hour. It is during big events in the sporting precinct. As such the handling of big crowds is a huge issue, to the point where special measures are often in place to deal with the large numbers of people, particularly just after events conclude.

The current trip from South Yarra to Richmond is 2 minutes. Via MRL it could easily be 15 minutes or more. And remember, it doesn’t just affect the Frankston line — it also affects passengers at the MATH stations (Malvern, Armadale, Toorak, Hawksburn), who in the future are likely to not have Dandenong line trains stopping at their stations.

A trip from Malvern to Richmond is currently 8-11 minutes, depending on stopping patterns. Via MRL it’ll be around 21-24 minutes or more.

So then, what is the consequence of this?

Is this extra travel time enough to prompt large numbers of people to try and change to another train to avoid going all the way around?

At times of big sporting events, when the train system is trying to shift the bulk of a 100,000-strong crowd out of the MCG, will the Dandenong and Sandringham lines be completely swamped by Frankston line people trying to get home as quickly as possible?

Will people who are actually trying to make a connection from the south to the east be happy to take the 15 minute detour (say, students heading to Swinburne in Hawthorn), or will they also want to use the other lines to cut their travel time? What effect on dwell times (and thus, track capacity) would there be from large numbers of people changing trains at Richmond and South Yarra?

I don’t know what the answer to these is, but you’d hope they’ve been looked at. 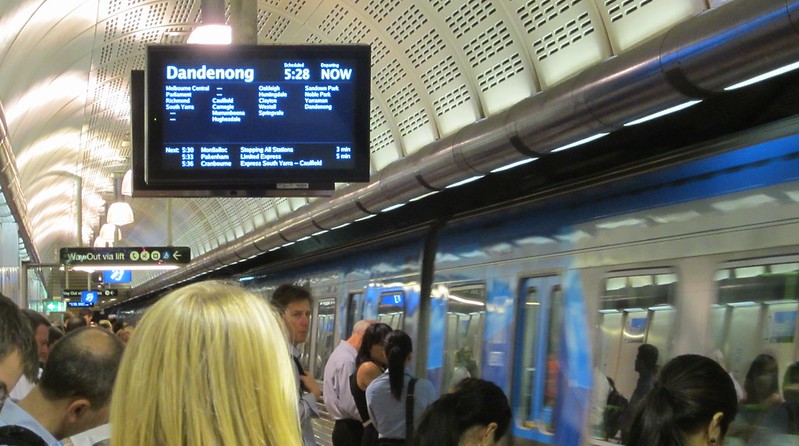 Lots of other issues – have they been studied?

This is only the tip of the iceberg. There are questions about how they’d build extra platforms at/under South Yarra (something MRT never resolved, and so ruled out).

How will it get under the river? Where will the extra platforms at Southern Cross be? I expect there are solutions to these (including the sewer), but have they been worked out, and costed?

Is Montague, with scads of potential users, really more important than Parkville, which has scads of users now? If the rail tunnel can’t run north-south to relieve St Kilda Road trams, what will be done to help them cope? I can think of lots of potential ideas on that one, but it’s unclear if this has been properly thought about and measured against prospective demand.

All trains not serving all CBD stations is inevitable, but what is the likely passenger demand from the Frankston and Ringwood lines for Flinders Street, and where are those passengers likely to change? Are the Frankston and Ringwood lines likely to be well-matched as far as future passenger/train demand goes? Ditto the other pairs: Sandringham and Newport, Sunbury and Dandenong.

And this is the real problem: the Metro Rail Tunnel project has its faults, but has had years of study (much of it published) done into it, part of a broader network development plan that studied not just where the tunnels would go, not just the number of trains flowing through, but also the effects of different upgrades on where and how passengers travel.

MRL in comparison has come from nowhere. There’s a complete lack of evidence that it’s gone through the kind of thorough study and planning that a multi-billion dollar project should have to get to a point where the State Government is funding it*.

Maybe in the few months since the project materialised, all these questions have been resolved. Maybe. But it doesn’t look like it.

That doesn’t bode well for avoiding cost blow-outs, nor for Melbourne getting the best solution for the billions that will go into it.

16 thoughts on “Melbourne Rail Link: has it been properly planned?”