It’s easy when looking at aerial pictures to see the vast amounts of land taken up by freeway interchanges.

What is sometimes forgotten is the impact at ground level from elevated roadways. Here are some snaps from around South Melbourne — which of course being inner-city, has some of the most valuable land in the country.

I suppose there’s a certain grace to the roadway structures themselves, but underneath it’s certainly not pretty. 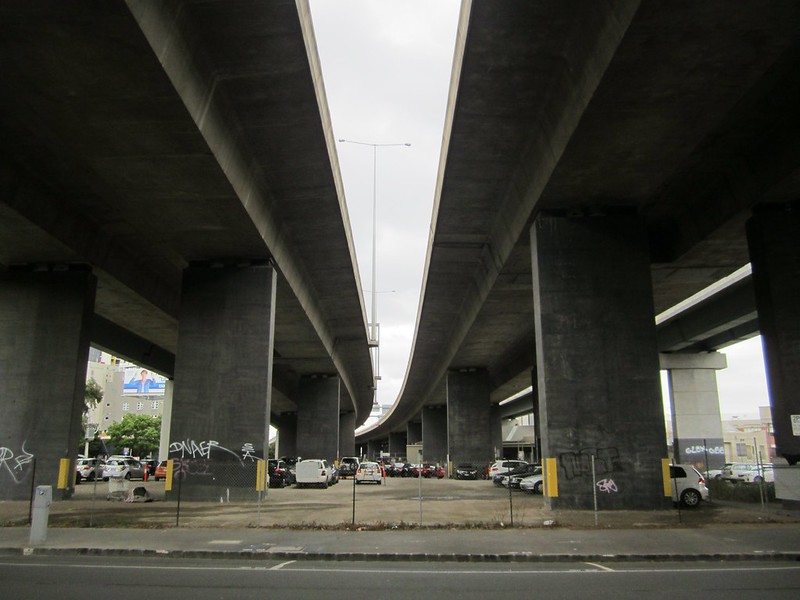 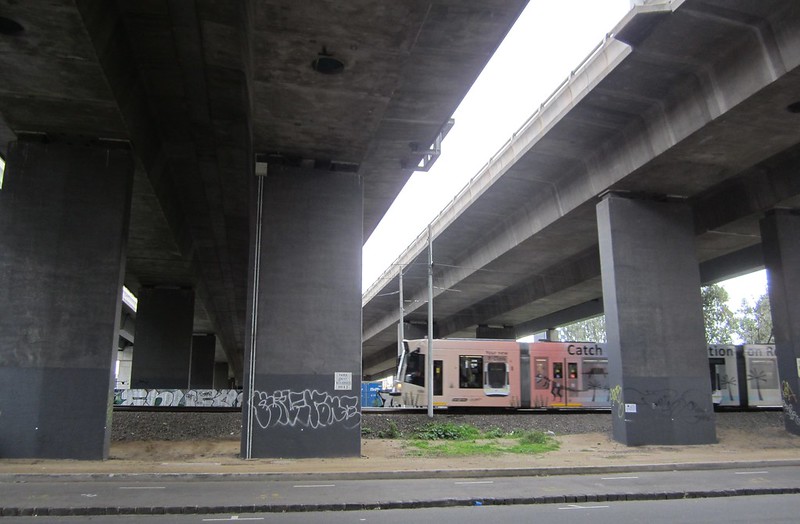 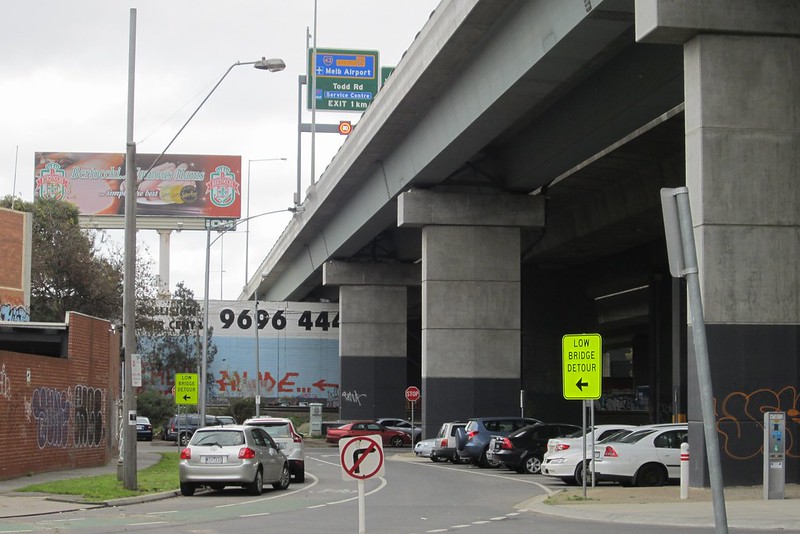 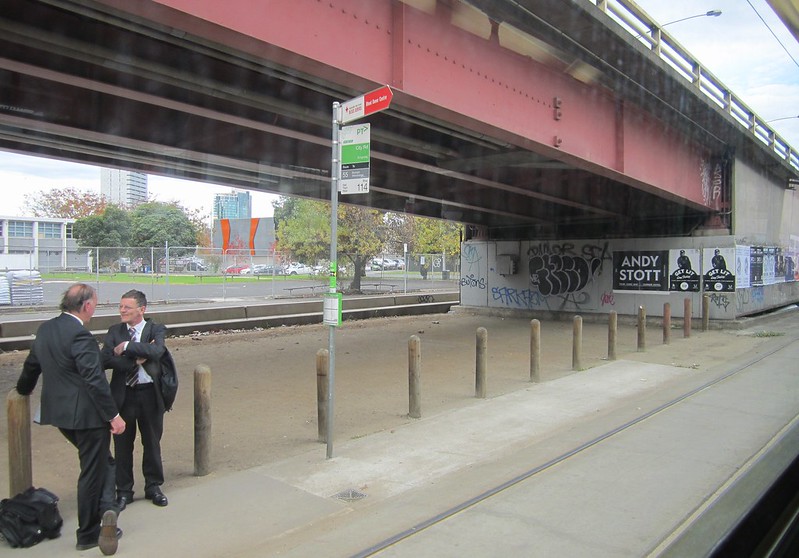 It really does seem that the only use for the land underneath roadways is parking — mostly for cars, but some for trucks/hire companies. 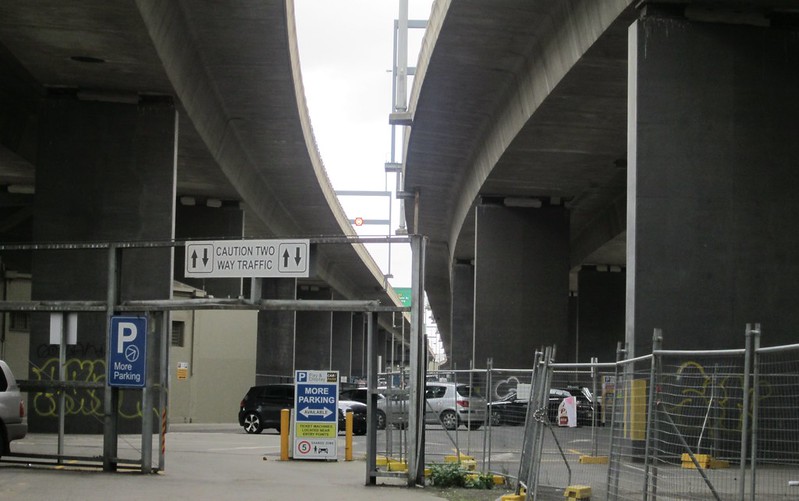 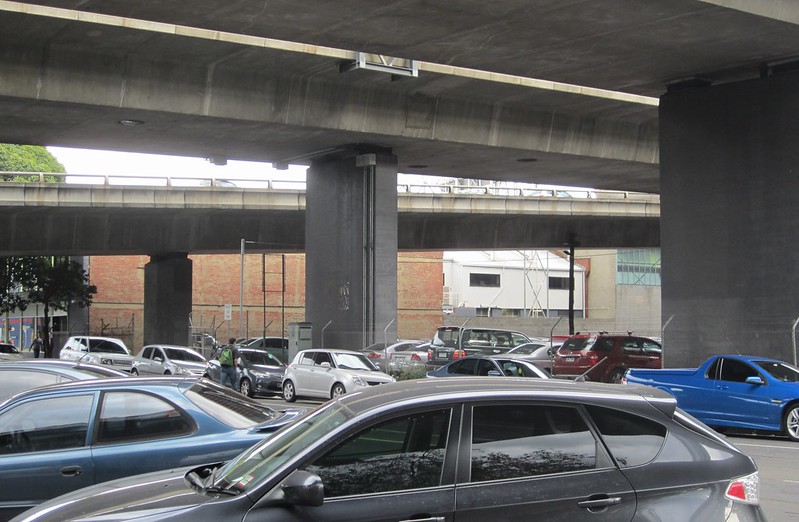 I only saw one exception: McDonalds seemed to be the only other business willing to be located underneath the freeway. 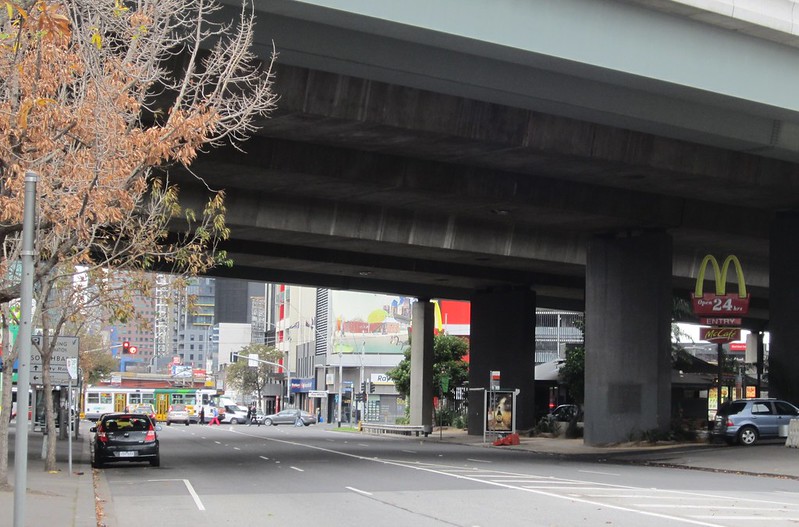 Of course, elevated railway bridges also have an impact at ground level. But the carrying capacity for the space taken is much higher with rail, and “interchanges” (eg stations) don’t have the huge footprint, as humans alighting trains don’t need the big turning circles found on freeway interchanges.

It’s important to note that while some is proposed to be tunnels, a big aspect of East West Link is elevated roadways. Both the western and eastern sections will involve new elevated sections. The Clifton Hill interchange will involve connections up high above the railway line, and the interchange from the eastern section to Citylink includes elevated roads — infamously surrounding the newly built Evo apartments, as well as from a tunnel portal in the middle of Royal Park. The new elevated sections won’t be just at the interchange itself, but also providing an expansion of lanes along the existing Citylink in both directions — north and south.

That is, of course, if it’s ever built.

I’m told that the expansion will take the northern end of Citylink near Bell Street up to a total of fourteen lanes. Maybe one day we’ll stop pretending that motorways are an efficient form of transport for big cities.

12 replies on “Photos: the loveliness of elevated roadways”

Indeed, the entirely new extra Citylink going all the way to Footscray Road, destroying the other half of the slowly recovering creek underneath is one of the under-reported parts of the plan. The tunnel is a waste of money; the elevated roadways are a waste of money and the worst sort of urban vandalism. And as everybody knows, the entire thing will just create more traffic.

If only Victoria had an opposition party to highlight this.

Elevated roadways are incredibly ugly. Not only South Melbourne, but Clifton Hill is significantly marred by them and it it will be a whole lot more spoilt. A friend once told me the most scary place he knows in the larger Melbourne inner area is the South Melbourne McDonalds.

Melbourne City Council at one stage proposed closing the east to north circular tollway exit and building a landbridge either side of the Power St overpass. Perhaps adding an underground railway station there too if original Melbourne Metro goes ahead, which might have more traction now with Australia 108 building being approved. Guess no commercial return from the landbridge would be an issue though.

I believe the east west link stage 2 to the port will run besides citylink at around double the height of it. Creating a bit of a monstrocity. I do enjoy walking along the bike path besides Mooney ponds creek, Upfield rail line and under citylink. It reminds us how small we are as humans and that despite some of the horrible things, we can create nature can still exist. https://www.flickr.com/photos/[email protected]/14538824064/
https://www.flickr.com/photos/[email protected]/14560451563/

Living in a building surrounded by freeways actually can be advantageous, because they can’t build another building 1 metres from your balcony. As long as your level in the building is above the roadway level.

Elevated freeways don’t have to be as ugly as that. e.g Darling Harbour was built underneath the Western Distributor. It’s not perfect, but it looks nice enough underneath, with the impact is softened with gardens and trees – see http://www.sydneyflightsaccommodation.com.au/wp-content/uploads/2013/01/Strolling-through-Darling-Harbour-Sydney-Australia..jpg

I was quite suprised to seen the underside of a raised road turned into quite a pleasant green / pedestrian space in Macau earlier this year when I was their on holidays. Don’t have the pictures on hand, and I doubt that exact method could be scaled up to multiple kilometers, but as numerous years of “freeway art” has shown, there’s quite a lot they can do.

A thought bubble: Is there something stopping them wrapping buildings around raised roads entirely, turning them into “floating tunnels”?

@bkbarnz, good point, though to my mind, that kind of amenity would only be possible in the context of an area which has a strong pedestrian presence. On its own, a park under the freeway probably wouldn’t be enough to attract people on foot – and would fall into disrepair.

I’m not sure these areas of South Melbourne would fit the bill, as they’re so car dominated at ground level. In comparison, by the Yarra around the railway bridges and the Kingsway overpass through the Casino, there has been a reasonable attempt (though could be better) to make things pleasant for pedestrians.

@James, it’s possible to wrap buildings around roads. Melbourne’s own example is the Casino, around Kings Way:

Well that elevated tunnel on citylink is so unusual, it appears in car ads in the US.

It would be great if 1-2 lanes on each motorway in Melbourne is re-purposed for a PRT System. They are building a 500m test track in Israel this year. Called SkyTran.us.

The supporting case for rail is that, rail overpass would need smaller width than a road overpass.

Also, it would be interesting of the monorail consortium had their way to build their plans.