Revised (and renamed, again) rail tunnel plans – not as bad as first thought

The metro rail tunnel has been renamed again. What has been at various times “Metro 1+Metro 2”, “the Metro Tunnel”, and the “Metro Rail Capacity Project” is now “Melbourne Rail Link”.

The plans for the revised version are not as bad as first thought. 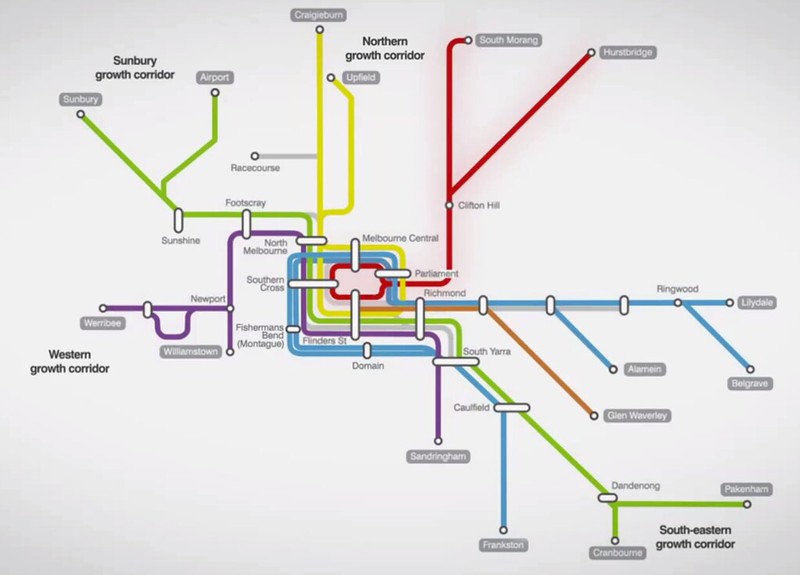 The Frankston line will run from South Yarra to Domain and Montague (Fishermens Bend), then to underground platforms at Southern Cross, then into the City Loop (which will have to have modifications to the Caulfield and Burnley Loops to handle trains in both directions) via Flagstaff, Melbourne Central and Parliament to Richmond, then out to Ringwood (and vice-versa).

As oldtimers will know, Montague used to have a railway station, on the Port Melbourne line before it was converted to light rail in the 80s.

The Sunbury/Airport line will be through-routed aboveground to Dandenong, via Southern Cross and Flinders Street. This presumably means that any plans for 9-car trains would require extension of aboveground platforms only. I would think it also puts in doubt the Airport line’s planned 25 minute trip, if those trains have to share the rails with stopping Sunbury line trains (rather than the RRL tracks as I first thought) — which can take up to 20 minutes between Sunshine and Southern Cross.

Presumably the two tracks from South Yarra to the city that become free will be used for V/Line trains and/or freight, in line with the vague plans known to be around the place for extra track from South Yarra to Dandenong for this purpose. They might have to share viaduct tracks through to Southern Cross.

This government video attempts to explain it all:

The good news is that it appears the new design for the tunnel will include a station/interchange at South Yarra, which the old one didn’t have.

There’s some talk of upgrades for Swanston Street-corridor trams to compensate for the lack of station, but little detail. It might work, with high-capacity trams and true traffic light priority that means trams never get a red.

Obviously ensuring the new tunnel links into the City Loop fixes some the problems with the previous version of the plan, though it’s unclear how long it’ll take passengers from the Frankston line to reach the city coming in via Montague.

But previously PTV types have said that reconfiguring the City Loop would cost lots of money and mean some Loop tunnels would be out of action for years at a time. Has a way around this been found? Or is it somehow okay to disrupt tens of thousands of train passengers for years, but not okay to disrupt Swanston Street?

The question still must be: why the re-design when so much work had been done on the old scheme? Why has the PTV plan, only released last year, been chucked out the window? Could it be that the Coalition didn’t want to build a project originally proposed under Labor? That’s no way to design multi-billion-dollar city infrastructure projects.

And why miss interchange with Flinders Street? Why through-route two lines from the same side of the city?

33 thoughts on “Revised (and renamed, again) rail tunnel plans – not as bad as first thought”