The new Springvale station opened earlier this week as part of the $159 million grade-separation of Springvale Road.

Yesterday I took a quick look around.

Arriving on platform 2, it reminds me a bit of Box Hill, with part of the station being under the road, which means plenty of rain cover is provided. Note the low ceiling, and how close to the top of the train the overhead wires are — it would seem that we are destined to never again see double-deck trains in Melbourne, at least not on this line. 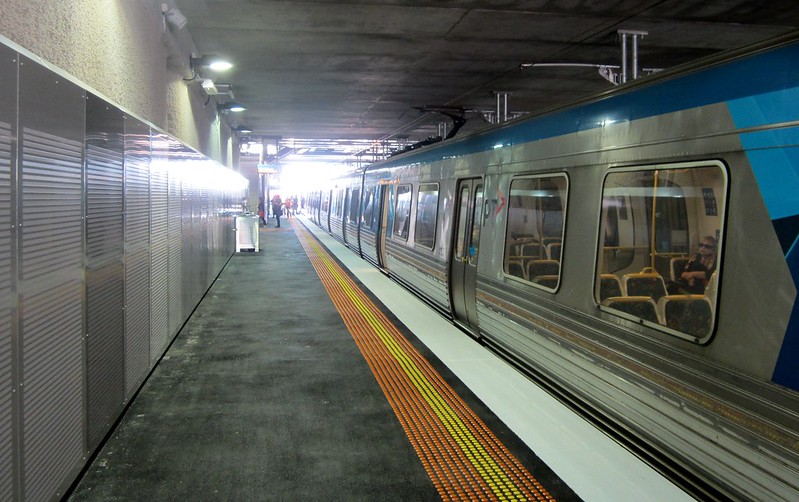 . Update: I’m told double-stacked containers aren’t possible on electric lines, as the pantograph on the trains would need to be gigantic.

The lower height is a blessing for passengers, of course – less steps. It appears provision for extra tracks will be on the southern side of the new line, where the original tracks were.

The overall look of the station is less grey than neighbouring Westall. From pictures earlier in the week, it looks a bit miserable in the wet — but most stations do. Note the extensive use of grilled surfaces, I assume to help prevent tagging. 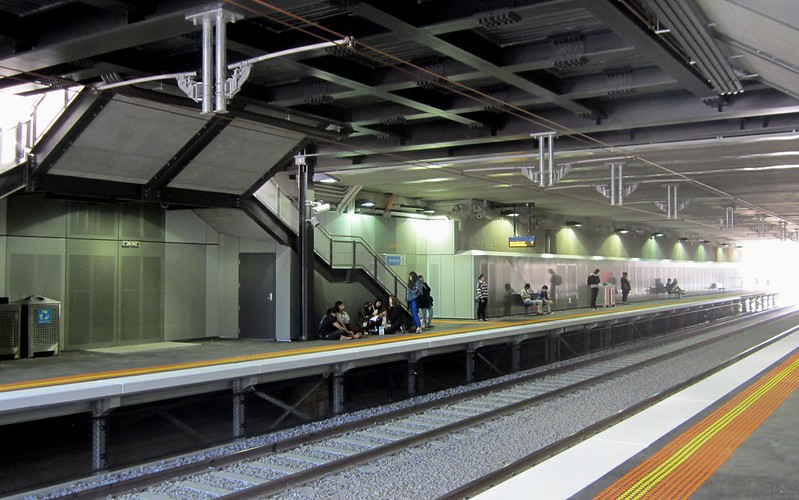 The concourse level is light and bright. This photo is taken from the edge of the footpath. There are two Myki machines nearby. There’s a booking office, PSO “Baillieu Box” pod, waiting room, and toilets. The PID (Passenger Information Display, listing train departures) is perfectly readable to the human eye — I really must figure out the settings for taking good photos of them with my little camera. 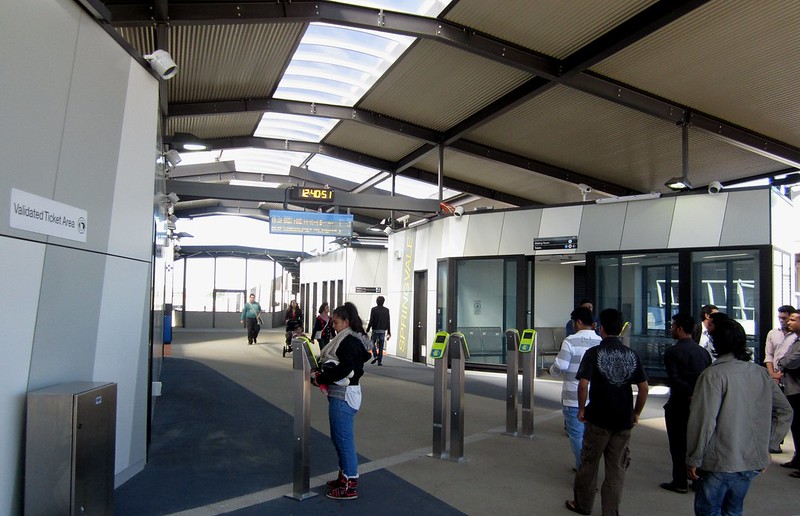 Note that it appears gates will soon replace the standalone Myki readers.

Next to the station entrance is the old alignment for the track, with rails from the level crossing still in the road. 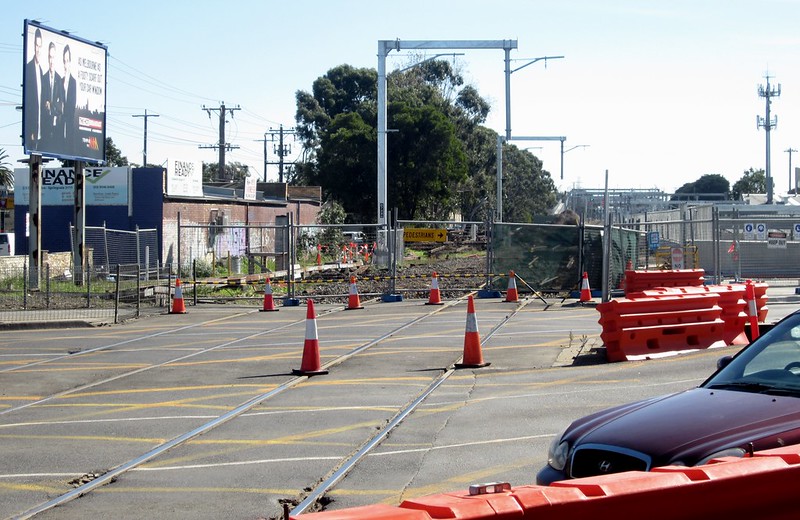 Also next door is the old platform 1, in use until just a couple of weeks ago, and I assume to be demolished shortly. 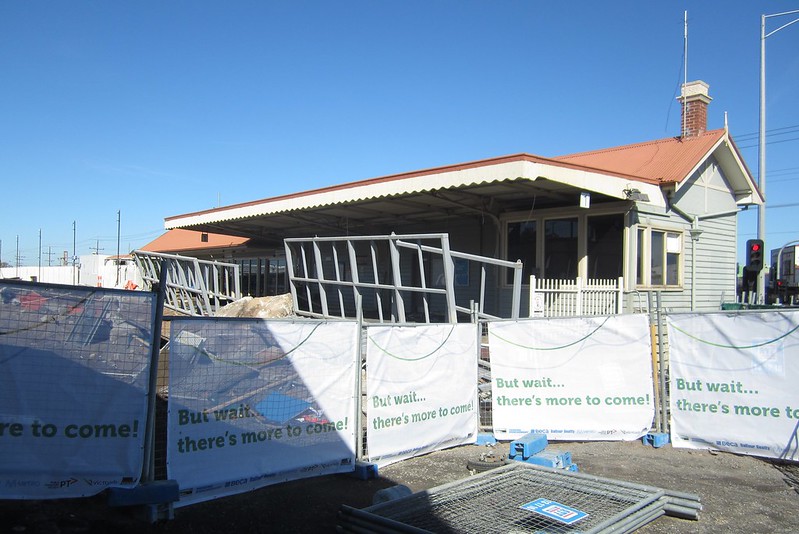 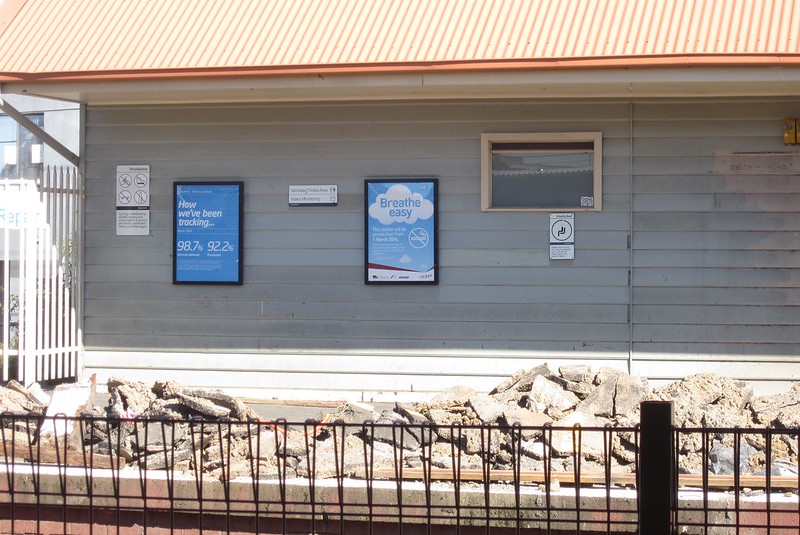 Currently there are ramps and steps down to the platforms. One lady with a shopping jeep asked me if there are lifts — there aren’t yet, but there is a space for them, and signs say they’ll be installed later this year. 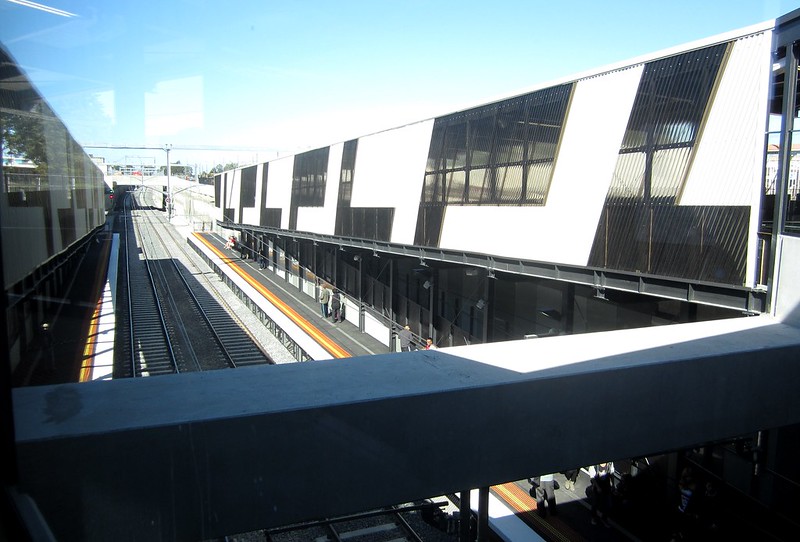 The platform and tracks have been configured to provide near-level boarding for Comeng trains — not too bad at all. There were rumours on day one of a Siemens train having problems with doors getting jammed open against the platform (their doors pop out when opened). It’s unclear if this is a big problem, or if it has been resolved, though come to think of it on my travels this day I only saw Comeng trains operating on the line. Perhaps just a coincidence — it seems at least some Siemens trains have been sighted on the line during the week. 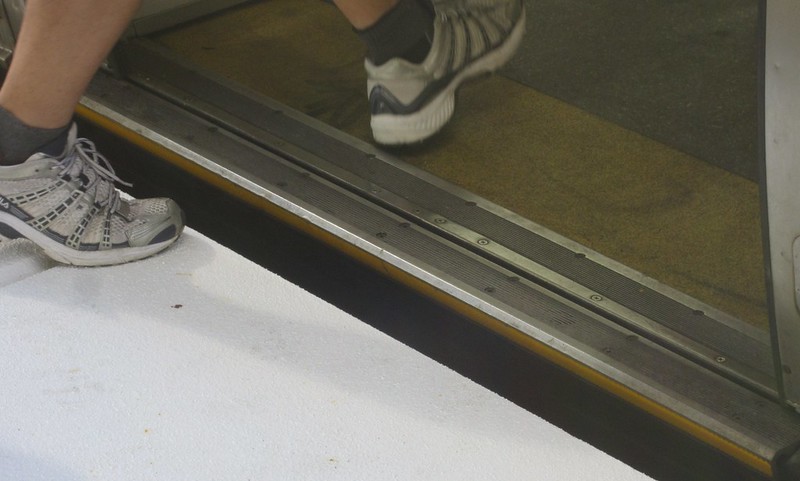 At the eastern end they appear to have made provision for later extension of the platform, though it’s not clear if that would allow the extension to 9 cars as is often rumoured to be coming. Hopefully. Or maybe the platform is already long enough for 7 or 8. The western end doesn’t seem to allow any space for extension. 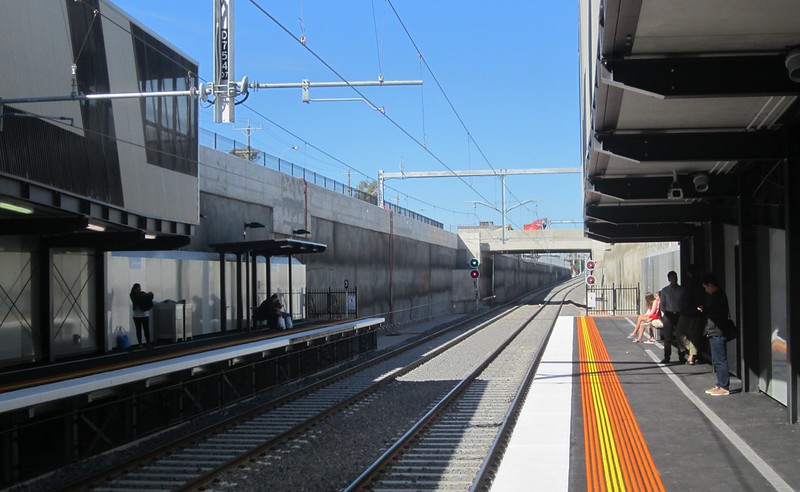 It was quite busy for ANZAC Day. The ramps mean much of the platform is a little narrow, though it seemed to be coping okay when I was there. It might be a little cramped in rush hour — hopefully the steps and ramps help spread the crowds out a bit. Note the drainage in the middle of the platform. I’m guessing this means there’s a slight slope away from the edge, which is one of the outcomes of several recent incidents involving prams rolling onto tracks. 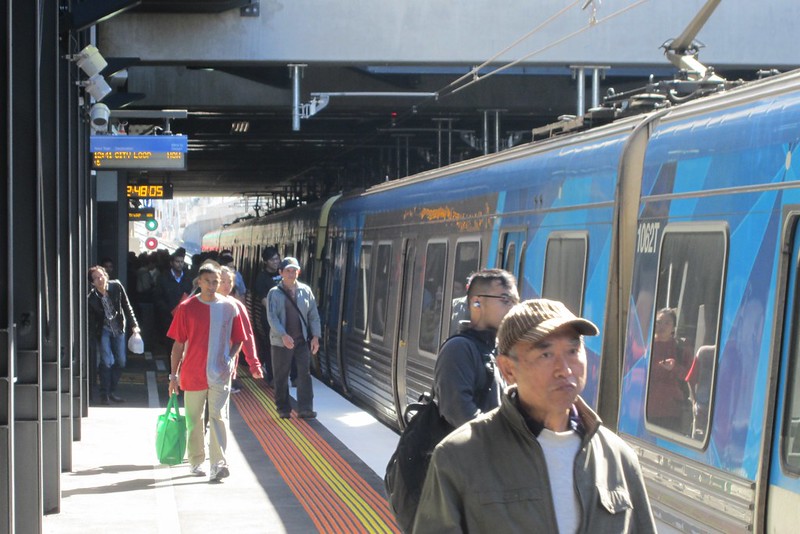 Overall it looks pretty good; pretty usable for passengers, and everyone will appreciate no longer having to wait at the level crossing.

Hopefully the grade separations will keep on rolling — the second of the Anderson Road, Sunshine crossings is underway, and the Dandenong package to be funded in the May budget will include four other crossings on other parts of the Dandenong line, and planning works for the others.

More photos including from the construction, are on the project Facebook page.

14 replies on “A look around the new Springvale station”

Great pictures and summary of new station. Thanks. I used Box Hill station for many years and I agree that Springvale looks similar.
PS I assume “tagging” refers to criminal damage that I end up paying for.

It’s worth recalling that when the Boronia grade separation was done in 1998, the PTUA called for the same treatment to be done at Springvale. It’s likely that had it been done way back then, the cost would have been a fraction of what it is today in real terms, given the Boronia project cost only about $30 million – for grade separation of two six-lane arterial roads and a station rebuild with bus interchange!

Looks good! Although it’s probably locked in stone, or maybe already occurring as I write, I think it’s a shame they’re demolishing the old station building. It looks to be quite old. I can’t find a date of construction anywhere, only the date the station was opened in 1880. Would’ve the building been constructed at the same time?

I have not as yet had a look.

On the issue of Pantographs; existing units would not have enough clearance, but I can not accept that they can not be made longer. We all know just how under funded rail transport is, so we can not be surprised about things here.

How far down they can go at Springvale, does have a lot to do with the water table. If they go too far down, they are going to really have a lot of problems with that water table. As it is, the current structure has been built like a boat with a very solid base, and to be very heavy so as to not float. The common sense would have been to build the railway over the top.

And there is the irony that, while it may save a little bit of time for the motorist, it shall only increase the time it takes for train users to use that station. Where it was straight in off the street, now you must navigate a stair case. Of course people with limited mobility, and when the lift does not work, there is the long walk along the ramp.

The elephant in the room here is why grade separations cost so much – and so much more than they used to cost. The answer is obvious when you walk past a public transport construction site, as I have done many times: large number of construction workers standing around doing nothing at all.

We have all read about the ‘influence’ of the construction and rail unions. What it means for you and me is that we can only afford a fraction of the number of grade separations that we should have.

Ward and Donnelly assign it to the ‘Parkdale’ group of stations and note this group had minimal Edwardian style decorations. However, Springvale is considerably different in design to other examples in this group which were constructed in the mid twenties.

I got a Siemens through Springvale on Anzac Day and the doors did not have any problems.

The old Springvale building is very similar to (if not the same as) Clayton (also to be replaced due to grade separation in the near future).

Regarding the train roof to overhead wire gap, it doesn’t look any worse than the City Loop – when you look at them end on, there isn’t that much clearance:

Yet the same tunnels allowed the double deck ‘4D’ train to run through them back in the 1990s.

Note that driver training at the new Springvale station is resulting in a month of cancellations across the system:
http://www.metrotrains.com.au/planned-cancellations/
There doesn’t seem to be any discernible pattern although my impression from a quick glance is that the Caulfield lines are a little more affected than other lines. Cancellations include peak services – very annoying! Also annoying is that I haven’t noticed any publicity being given to these cancellations (or if there has been, it’s been minimal ..why am I not surprised?), with the result that I at least arrived at the station only to find the train I expected to travel on wasn’t running.

I believe grade seperatation costs alot due to unions and also the immense cost of planning and doing the works whilst cars and trains operate in the same space as the construction is done. Not to mention the fact that because we live in a city that is governed by a car crazy culture we have more companies that can build roads then companies that can construct rail lines, so its possible there are less companies doing tenders for rail construction meaning less competition and higher costing. Its dissapointing to see that there has been no work done to eventually one day add two more tracks. This is typical of governments keen to score browny points with the public but fall short on doing any extra work for the future. Id love to know how they will construct the ormond station underpass.

[…] tracks maintained, with “passive provision” for a later fourth track (which similar to Springvale, seems to mean not building anything in the way of […]