While some are hailing the government’s plan (backed by Labor) to apply zone 1 fares (as a maximum) right across Melbourne, I thought it might be worth looking at the per kilometre cost for various trips — including some V/Line trips.

The table below shows a sample of trips, both with the current fares, and the proposed ones (assuming no overall rise on 1/1/2015).

What I find interesting is that once the change takes effect, the cost per kilometre will vary by up to a factor of 23 — with passengers from Richmond to the City paying $1.38 per kilometre, but Pakenham to City paying just 6 cents. Stations like Oakleigh and Malvern are somewhere in the middle.

As you can see, there are some other interesting things to note: 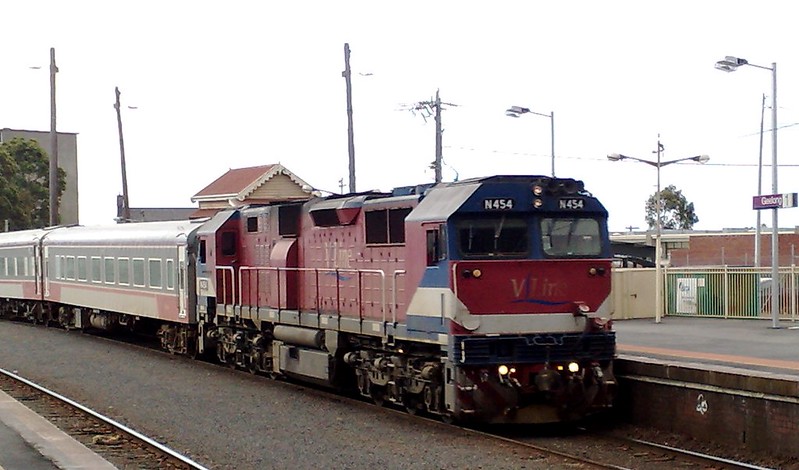 While I was looking, I had a snoop around the regional town bus maps, to see if any of them were stuck with two-zone bus trips where Melbourne will only pay a maximum of one zone.

When the Myki zones were devised, they were wise enough to put just about the entirety of each town within a single zone (with some areas in overlaps of other zones).

Geelong is in zone 4, Seymour zone 6/7 overlap, Traralgon zone 12/13 overlap, Bendigo zone 14, and so on. So almost every local bus trip in Victorian cities (at least those covered by Myki) is a single zone trip, $2.20.

One exception is at Ballarat: its bus route 9 to Creswick crosses from zone 8 (Ballarat) into zone 9. This means the 14 minute, 18 km trip from Ballarat Station to Creswick town centre is a two-zone trip, costing $3.60 — about the same cost as Melbourne zone 1. All other Ballarat bus routes are within zone 8.

I should note that comparing the per kilometre costs are not an attempt to implicitly say that point-to-point fares would work better or more fairly, though I know some people support them.

The poor implementation of Myki also means it’s unlikely we’ll ever see point-to-point charging while it’s around. Slow touch times mean re-introducing touch-off to trams would play havoc with loading times, even in the suburbs. And Myki’s GPS units seem to be hopeless when it comes to accuracy. (Curiously, Smartbus GPS units are excellent.)

Point-to-point also isn’t necessarily good policy. It needs to be very carefully implemented not to penalise people who go from A to B via C because the network is designed so that they have to — interchanging between services is already a necessary pain for many trips — you shouldn’t charge people more money for it.

And the bottom line is politically we’re probably stuck with the mostly-flat-fares in Melbourne for a few years at least.

So if we’re stuck with it, let’s embrace it: Rejoice that Zone 1 types can explore Zone 2 for no extra cost! Embrace that you won’t need to get your Myki out for tram rides in the CBD! Celebrate the removal of the need to touch-off for most people!

Update: Tom pointed out in a comment that my distance from Richmond to Flinders Street was wrong. Whoops. Corrected.

Arh Lara. What about trying to fix that one.

This is one good example of how we need two systems in place.

#1, A radial type fare system, exclusively for those of whom seek to travel to/from/via the city

#2, Regional type zones, for those people of whom seek to travel only within the local area.

As for having a 2-hour fare for any journey that is more than three zones?

There needs to be a single/return/daily/weekly types for the radial zones, but have hourly increments in the regional zones up to a 5 hour cap.

Then again, the V/Line conductors need to learn how MyKi works. After my experience last Monday, which shall result in my leaflet-drop at Southern Cross station in a week or two due to the outrage, I shall never travel V/Line again on principle unless I had no other choice, even then I do not know.

Let me say, while I had more than enough money on my MyKi, I was told that I was fare evading, and I must go and top up before I could travel. But that is another issue.

As a general comment, I don’t think inner suburban travellers mind subsidising longer distance passengers up to a point, but the planned changes seem to go way to far and are vastly removed from a user pays ideal, a philosophy often put forward by conservative politicians.

Interesting about the 6 cents/km versus $2.39/km. Most people I speak to say that the current system with 2 zones has similar disparity and having one zone makes things simpler. There are lots of arguments, some without many reference to facts!

The Bendigo bus network has the problem you describe.
A journey from Kangaroo Flat or Eaglehawk (or Strathfieldsaye or Maiden Gully) to Bendigo is a two zone journey.
http://ptv.vic.gov.au/assets/PDFs/Maps/Regional-centres/Bendigo-Bus-Network-Map.pdf
I’m looking forward to two for the price of one zone pricing in Bendigo, and while we are at it lets have free buses in the Bendigo CBD too.

The per km cost is be higher for stations closer together than Richmond and Flinders St. Some of them are under 1 km apart.

Not my maths, just my typing.

I find it interesting that you can (indeed must) use a myki if you make the journey from Ballarat to Creswick on the city bus, yet if you make the exact same trip on a Maryborough-bound train, you need a paper ticket.

The Zoning is the same, and the cost of the fare is the same. Seems silly to me.

a) The above 2015 figures don’t include the normal 2.5% inflation increase. Has that been cancelled?

b) There’s also the odd cases like Willison-Riversdale, 0.418km at $3.58 = roughly 6x the cost Richmond-Flinders St. On the other hand, it’s an 8min walk vs a 1min train ride plus average 10min wait, so I’d be surprised if many people did that sort of journey.

c) if point-to-point were implemented, every location would need to have a lat/longitude published, then the charge would be per KM on a direct straight line linking those points. The extreme points of a journey could be used for the calculation, with a new journey defined as more than, say, 25min between touch-off and next touch-on; or 20min daylight, 40min nighttime or something like that. Biggest problem with the system is that people wouldn’t easily be able to calculate fares without a map/calculator, whereas now, I could figure out a fare to within the dollar just from memory. A solution to that problem would be to charge in 10km increments, rounded to whole KM and with say 1km each way leniency if the average person can quickly calculate to within 10%.

The potential flaw with this system is that a trip Williamstown-Elsternwick would cost $2.70, perhaps counteracted by the distance/time penalty by going around Coode Island.

Discounts could be provided thus – concession = 50% cost per km; multiple trips per week give credits, say every $10 spent gives $1-worth free, or whatever’s equivalent to the current monthly vs daily costs.

Congratulations Daniel on your ‘appearance’ on Media Watch tonight!

Good outline / comparison of the per km cost variability for end of line and near to city PT users. It’s potentially more than 23x. What about Pakenham to Hurstbridge or Werribee or Sydneham (although respect not too many people likely make trips like this). Any of those trips are more like 90-95kms, so equate to about 3.8-4.0 cents per km. So more like 45x more than Richmond – Flinders.

Richmond to Flinders is bad enough at $1.38 per km, even worse are those short suburban trips which used to start in zone 2 and finish in zone 1, eg Patterson to Glen Huntly, 4kms at $6.06. Plenty of similar examples.

I think David’s suggestion of 10km increments is valid, but can be implemented in a more similar way than point to point basis. My idea is for:

1 – increased number of zones, maybe more like 5 or 6 for the whole network, still on a concentric ring arrangement reflecting the structure of the physical network. Each zone could be something like 6-8kms radially from CBD. that would ensure the vast majority of the tram network finished in the new zone 2 or 3, and with say 5 zones you can call the outer extremity of the metro train network zone 5. This would still necessitate touching off on trams and buses, but eliminates the issue of precise GPS co-ords, since the zones are still reasonably large areas.

2 – The general elimination of the concept of multiple zone overlap regions (for simplicity’s sake). Ie, As one zone ends, the next immediately begins. With greater zone increments, this eliminates the perceived ‘fairness’ need for the zone 1 or 2 overlap region, and makes shorter trips more economic, eg the Patterson – Glen Huntly example above. The exception would be for zone boundaries where 2 zones applied and users charged depending on the direction they came from (ie if you end your journey at a zone 2/3 station, and began at a zone 3 station, charged only a zone 3 fare). This is similar in principal to now, but without the 3-4 stations ‘overlap’ confusion and messiness this creates on a map. Clearly defined zones could easily be portrayed on network maps by alternating grey / white background shading (this is especially the case for train and tram where good whole of network maps exist). I remember seeing a similar shading scheme used on the London network. It was very clear with many zones.

3 – For the train network, all junction stations, where people change in order to backtrack along an adjacent line would be multiple zone stations, so that people aren’t paying for an extra zone for the privilege of changing.

An analysis of the PTV station by station patronage data for trains indicates that only about 2/3 of trips terminate at an inner city station (City Loop + Richmond & Nth Melb), so 1/3 of trips are suburban origin and destination, of which a number would suffer the zone 1 to Zone 2 issue (at least prior to Jan this year). Additionally, the average trip length on rail oriented PTV (inc trams, which represent about 40% of Melb rail trips) is probably something in the 15-20km range, So a total 3 zone fare would apply on average, which at $3.60 – $4.00 would be consistent with the current fares for the average journey, and a higher proportion of trips would be in the $0.20-$0.30 per km range than currently – ie less per km cost dispersion for all trip types.

Anyway, the point is a flagfall + increment fare basis, with a greater number of zones (but not unwieldingly so, 5 or 6 is understandable and manageable) would lower short trip per km costs, and could be designed to not penalize longer trip makers. Richmond – Flinders St would be $2.00, or $0.80 per km,