There seems to be a little confusion over the various names of the Metro rail tunnel — for instance the name Metro One pops up regularly, especially out of the City Of Melbourne. The confusion is not surprising, as the name and design of the tunnel has changed a bit over the years.

The first glimpse of the idea came when Professor Graham Currie raised it back in 2005, I suspect helped along by ideas out the transport bureaucracy. Back then it didn’t have a name, but was compared in the media reports to the London Tube.

Professor Currie said the tunnel would link Melbourne University in the inner north to South Yarra station in the south, running for several kilometres under the central business district and St Kilda Road.

By the time of the Victorian Transport Plan in 2008, the tunnel was official government policy, an eventual 17km long tunnel linking Footscray with Caulfield, and to be built in two stages.

The Melbourne Metro – Rail Tunnel Stage 1 has an estimated cost of more than $4.5 billion. Stage 2 of the project will connect St Kilda Road (Domain) to Caulfield following the completion of Stage 1. Subject to Commonwealth support, development of Stage 1 is expected to start in 2012 and be completed by 2018.

Around that time they seemed to have a fascination with the word Metro, ensuring that it was also adopted as the name of the rail system itself when the new operator took over from Connex in 2009.

Metro rail systems are designed to run higher capacity trains from end to end of lines using dedicated tracks – the trains can run at higher frequency without interfering with other routes. The focus is on simple timetables, frequent services and consistent stopping patterns. Metro systems like those in London and New York have key interchange stations to allow people to change trains easily or switch to trams and buses to get to where they want to go.

This all makes sense, and it’s in that context that the rail tunnel has been emphasised — separating out rail lines and building extra CBD capacity to allow more lines to run independently.

So “Metro 1” was just the first stage, from Footscray to Domain, serving the Sunbury line. “Metro 2” was the remainder, to Caulfield, hooking up with the Dandenong line.

The big problem with building stage 1 and then waiting a while for stage 2 was that the capacity of the Sunbury line into Domain, and then having to reverse back out, 14 trains per hour, isn’t hugely greater than capacity of that line into the City Loop will be after Regional Rail Link is completed. 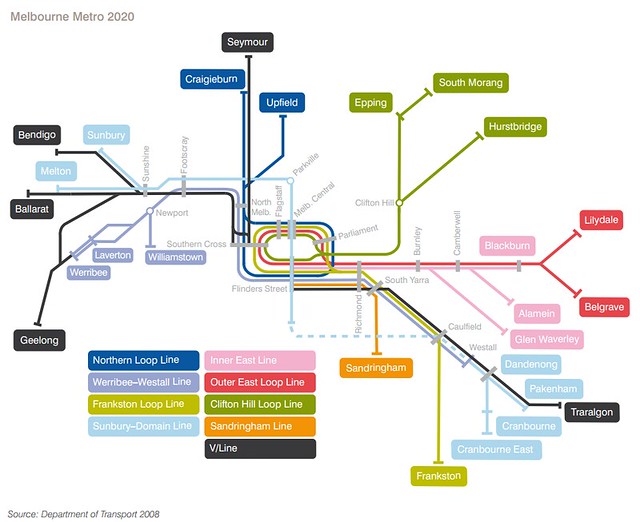 One tunnel to link them all

By 2012, the plan had been revised, with the tunnel shortened to run from Footscray to South Yarra, and to be built as a single project, and including a station to allow for urban renewal at Arden.

This submission builds on previous submissions to Infrastructure Australia – Melbourne Metro 1 (Ready to Proceed) and Melbourne Metro 2 (Real Potential). It is an interim step towards a submission defining a single project that will deliver the benefits of the two metro schemes. In doing so elements of the previous two submissions are combined and the project scope is being
refined in an effort to reduce costs. 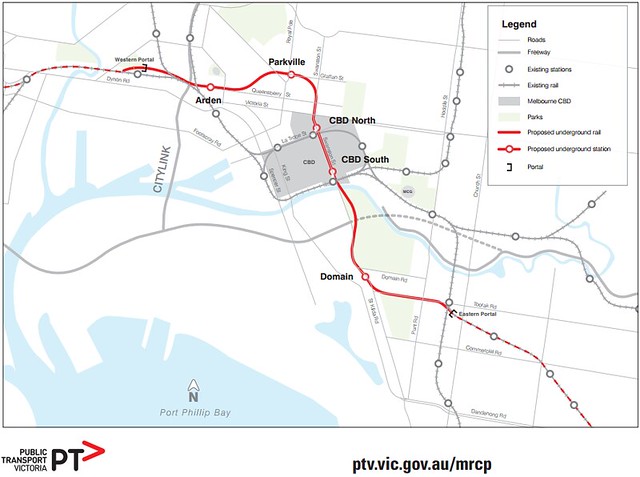 The Metro tunnel was worked into the (very interesting) PTV Network Development Plan for rail, released last year. It also included a second tunnel, eventually to divert the South Morang line via Parkville and Flagstaff, then to Southern Cross and out to Fishermens Bend. 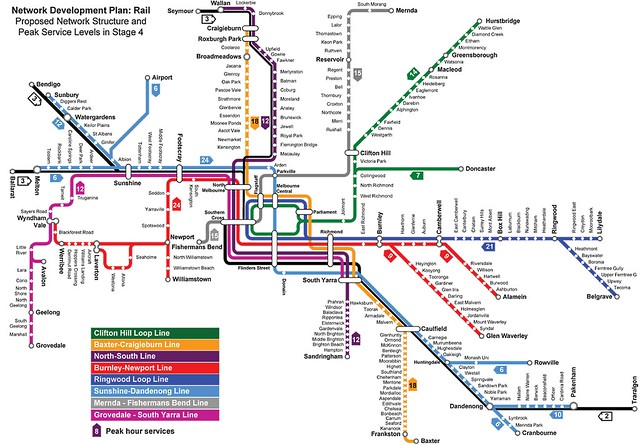 A couple of months ago the project was officially renamed… which makes sense as the rail tunnel is just one component of a multi-faceted push to increase capacity across the rail network, including on lines that won’t get served by the rail tunnel(s).

Mind you, I can’t see this new name really catching on in popular usage because if the tunnel ever gets built, it’ll be the most expensive, most visible component.

In November 2013, the Melbourne Metro project was officially renamed as the Metro Rail Capacity Project. The new name better reflects the significant capacity benefits that the project will provide to the Sunbury, Upfield, Craigieburn, Pakenham, Cranbourne, Sandringham, Frankston, Werribee and Williamstown lines. On day one the project will enable an additional 20,000 passengers to travel on Melbourne’s rail network in the peak hour, as well as relieving congestion on St Kilda Road trams.

Reports in the past week or two indicate the state government seems to be fumbling the project. The Premier has actively talked it down, suggesting it could result in Swanston Street being dug up for two years.

Various wild ideas have been thrown around, some trying to merge the original North-South Metro tunnel and the South Morang/Flagstaff/Fishermens Bend one:

From what I can see, the 2012 plan is better than any of these, given it serves Parkville, Domain and busy Swanston Street — the only caveat being that it actually excludes an interchange at South Yarra, and is unclear about increased capacity from South Yarra to Caulfield. (Also to fully use the capacity, the Dandenong line needs to be sorted out, especially with regard to level crossing eliminations.)

Frankly I don’t trust reports that cut-and-cover has to be used all the way along Swanston Street, with two year long closures of the entire street, particularly as the tunnel has to be quite deep to get under the existing City Loop and Yarra River.

While they sort out when the tunnel will be built and where it should go (they’re a bit distracted by that other tunnel — the one nobody voted for), it’s once again worth mentioning that upgraded “moving block” signalling will provide a heap of extra train capacity — and there’s a heap that can be done to improve the tram corridor as well, with proper traffic light priority, especially along St Kilda Road. These upgrades can buy a few more years of capacity for a much smaller capital outlay.

And remember, “metro”-like frequent trains, every 10 minutes or better on all lines all day every day is largely possible right now, with existing infrastructure — and would be a huge boost to public transport network usability.

Inevitably though, the tunnel has to be built.

The CBD is growing, and getting busier, and suburban growth is concentrated on the Dandenong corridor and the western suburbs, which the tunnel will serve.

When it comes to public transport, those agglomeration benefits they talk about aren’t imaginary. Mass transit capacity is critical to continued accessibility and economic growth of central Melbourne, and thus the state.

Update May 2014: the Coalition government has changed the tunnel route and given the project a new name: Melbourne Rail Link

Update January 2018: terminology has changed a little since this post was written.

Metro 2 is shorthand for the second proposed tunnel in the PTV Network Development Plan, from Clifton Hill via Flagstaff and Southern Cross to Fishermans Bend, with a possible extension under the Yarra River to Newport.