From next Saturday, 1st of March, smoking will be banned from the entirety of all railway stations and tram platform stops.

The new arrangements will extend the existing smoke-free zones, which currently only include covered areas of railway platforms and inside covered tram and bus shelters.

“Extending smoke-free areas is good news for public transport passengers and supports other government initiatives that aim to reduce the impact of tobacco and second-hand smoke on the community,” Mr Mulder said.

I think this is a good move.

The problem with the current smoking ban in covered areas is that signage is rare, and often so small it’s almost impossible to see — for instance:

The key will be properly promoting the ban, including news coverage (which in evidence today) and much more prominent signage. Enforcement can back these up, but fundamentally if people know the ban exists, I expect in time most will respect it.

I haven’t noticed any in the wild yet, but here’s what the poster for railway stations looks like. Leaving aside the way they’ve mixed their tenses, hopefully signage will be just as prominent on tram stops, and will be improved at bus stops. 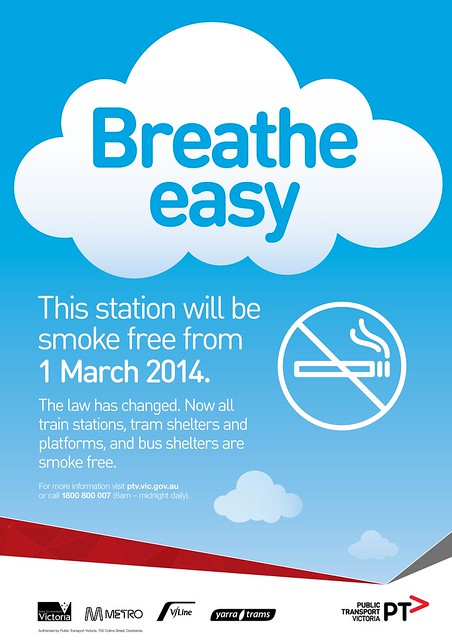 There is a possible caveat however: it’s unclear if it applies to tram stops which are accessible, but not via a platform — this means Easy Access Stops, including the stops along Swanston Street. And the publicity indicates the ban doesn’t include non-covered areas of bus and non-platform tram stops.

This bill from November 2012 appears to indicate the original intention was a complete ban within 4 metres of any railway station, tram or bus stop, ferry/punt landing or taxi rank (unless just passing by). Maybe any lawyers reading can advise on the status of those clauses.

Update 23/2/2014: Thanks to Mark (see comments), who checked and found the bill above was defeated. Kind of a shame, but perhaps it was seen as not clear enough where the smoke ban would take effect.

In any case, hopefully the change will mean an end to that super annoying habit of some smokers (you know the type) exhaling from their extinguished cigarette after they board the train.