Veteran road industry figure Max Lay made something of a startling admission last week in an opinion piece in The Age on the proposed East West Link: that the intent of major road projects isn’t to fix congestion:

Opponents play the congestion card, arguing that previous projects have not eliminated congestion, forgetting that this was never their intent. The link will significantly improve the way traffic moves across Melbourne’s inner north, but there may be times when demand exceeds supply.

It’s a little surprising to hear this, as the government has made repeated claims about the East West Link being “congestion-busting“. 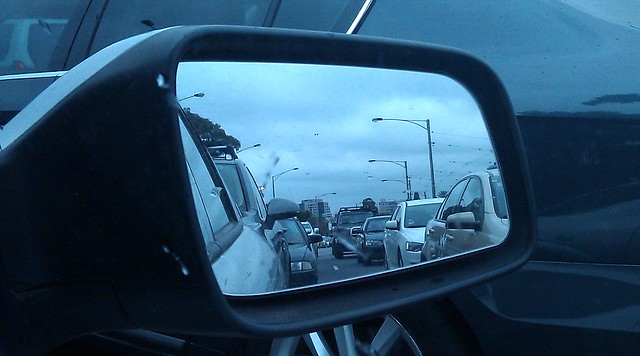 Detailed traffic modelling for the first stage of the East West Link estimates the toll road will reduce peak travel times between Melbourne’s east and west by up to 20 minutes.
– ABC report

(For more details, you want the CIS Technical Appendix E, page 45. Just take it with a pinch of salt, as traffic levels on inner-city roads are actually static or dropping; Vicroads official traffic count figures show Alexandra Parade traffic reduced across the board – and by to 34% on one section – between 2002 and 2012.)

Before Citylink opened, the road lobby made bold promises about travel times for that, too. How did they work out?

Here are some claims made by Citylink/Transurban themselves (published in The Age 16/11/1998) for AM peak trips, compared with the actual travel times then, and today:

*Note that the 2013 figures use a limited sample size — Wednesday morning, to be precise, when there appeared to be no major road network disruptions. Actual travel times are, of course, highly variable.

And the 2013 figures use default values for some locations in Google Maps, which may not precisely match the intent in the forecasts, though they appear to be close — because estimates made last night at 11pm were very close to the claimed predictions.

In other words, the only way to get anything like the promised times is to make your trip in the middle of the night. The predictions appear to have assumed free-flowing traffic.

While some sections of Citylink have reduced speed limits from 100 to 80 since it opened, affecting travel times, the real difference is that traffic volumes (particularly at peak hour) have ballooned — free-flowing traffic simply doesn’t occur on these roads in peak hour.

So the result is that while there are some time savings, they are nowhere near what was promised. The travel times in AM peak today in most cases are actually closer to the pre-motorway times than the promised times.

Based on this, it’s hard to see how East West Link will meet its “congestion-busting” pledge. Of course, there’s always the chance that it’ll attract virtually no traffic — leaving surface roads clogged… that might mean it’s free-flowing, but with little toll revenue, an even bigger impost on taxpayers.

This recent update on Australian tollway traffic levels shows Citylink is one of the only tollways in the country that has steadily increased traffic since opening. It’s also one of the most profitable. It makes me wonder – could it be that tollways can either meet their trip savings promises or get enough traffic to be profitable, but do not both?

You could argue that it’s unrealistic to expect traffic predictions made in 1998 to be fulfilled in 2013, given the inevitable growth that has occurred in Melbourne, and the unpredictability of traffic. And you’d be right. But that’s precisely what is being done now with EWL with their 2031 predictions. Why should they be any more accurate than Citylink’s fifteen years ago?

10 replies on “#EastWestLink “congestion-busting”? They promised that for Citylink, and it wasn’t.”

Yes, I read Max Lay’s comment in The Age on the weekend and thought: We WERE promised quicker travel times prior to CityLink.
That said, when we pick relatives up from the airport (off peak) it is far quicker using (and paying for) CityLink than the previous crawl through northern suburbs.

“faster journeys” and “less congestion” are not actually synonyms.

With dynamic speed limits, the Bolte Bridge of Citylink’s ‘Western Link, is 60 km/h during the AM peak travelling southbound due to traffic congestion and sheer weight of traffic. Compare this to 70 km/h on parts of nearby Docklands Highway, and the effect is to slow traffic both due to legal abservance of speed limits, and by weight of traffic. What a success with the added virtue of being tolled for it!

A fairly common knee-jerk response to CityLink’s failure to solve congestion is to say “think where we’d be today without it”. That assumes that CityLink was the only measure available in the 1990s to deal with traffic congestion. Perhaps if we hadn’t built CityLink we’d have invested in the public transport system, and instead of falling apart today our public transport would be healthy and used by twice as many people again.

All CityLink has done is ensured that virtually all growth in travel in Melbourne between 2000 and 2004 was by car instead of by public transport, and so we’ve just reproduced the congestion problem at a larger scale instead of giving people more congestion-free alternatives.

I have found Google Maps and sat nav devices always underestimate travel times. The time savings may be even less if they were measured by Google or similar.

Peak times last about 5 x 2 x 3 hrs = 30 hrs, but there are 168 hrs in a week .
So 82% of the time is non-peak & citylink is the perfect way to get to the airport to pickup or dropoff relatives, whatever time of day or night. So, Daniel the problem with your argument is that most irregular users (ie the voters across Mebourne) love it, as it saves the crawl thru the city (now 40km/hr) if you want to pick up the rellies at the airport. The real winners of decent roads are those tradies & trucks who need to do business across the city.
So although any new road will always get conjested at peak, it doesn’t mean the majority think it’s a waste of money.

The conjestion busting claim will only ever be 18% true.

@jon, that’s a fair point – unfortunately I don’t have that info handy.

@Alasdair, it would be completely wrong to claim that congestion only occurs in weekday peak periods. Some areas see it even on weekends, though often this is due to roadworks or closures for special events.

I remember the drive to the airport from the SE before Citylink. Kingsway, King St, then through North Melbourne and onto the Tullamarine Freeway. I don’t remember it being particularly slow, though it would have been during peak.

(As I write this on a Saturday morning, GMaps says Dandenong to the Airport is 46 mins in current traffic, but 66 mins if avoiding tolls eg avoiding Citylink. So in this case, well outside peak hour, Citylink saves 30% of the travel time. Bentleigh to Airport 42 mins vs 51mins via the Ring Road vs 58 via King St)

But Tony’s point remains – if Citylink hadn’t been built, what PT would we have been able to fund instead? Airport rail? Doncaster? Monash/Rowville? Mernda?

And it seems we’re about to go further down that path with EW Link.

I still say that, my ‘Alex Tangent’ bus network idea would be far surperior to this idea of this big freeway.

Furthermore, how many trains from the Burnley group are sent over to Newport and Flemmington racecorse sidings to stable during the day. Why can we not make use of these movements with great ‘cross town’ travel opportunities?

Such trains need only run express from North Melbourne to Newport or Racecourse, to help justify such a movement. I guess why do we need to have so many operate as an ’empty movement’ rather than carry at least one or two passengers?

[…] Bowen from the PTUA looked at the same congestion busting claims made to justify CityLink. He concludes ”  the result is that while there are some time […]