Motorcycle/scooter parking on footpaths – In a crowded city centre, this doesn’t make sense. Some years ago I wrote about issues with the City of Melbourne policy of allowing motorbikes and scooters to park on footpaths, except in a few locations where it’s specifically banned.

The problem is, most of the guidelines seem to be ignored. 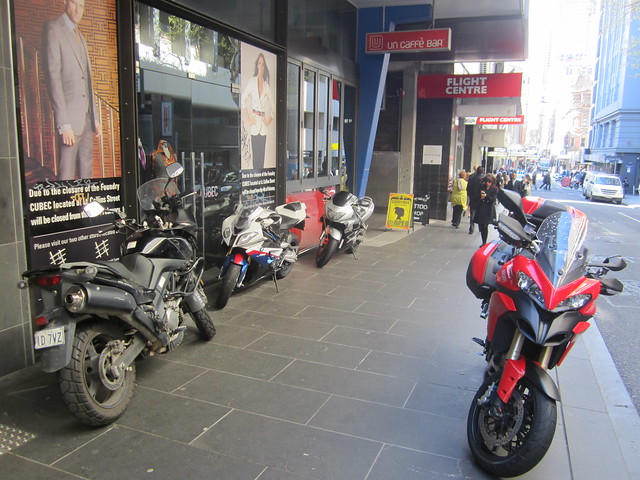 DO park at least one motorcycle wheel diameter back from the road kerb, to allow pedestrians free access to and from the road and to parked vehicles (You can leave less space between your motorcycle and the kerb if you park next to a “no stopping” zone). 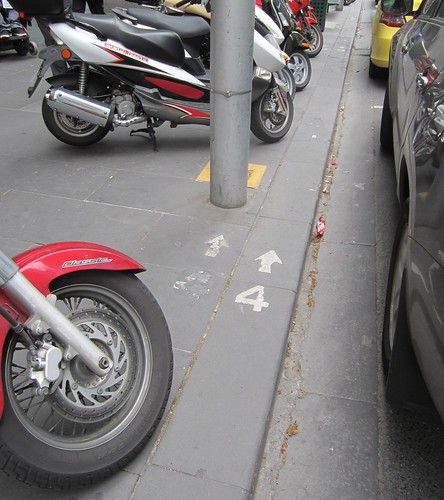 DO NOT PARK where signs indicate that motorcycles are not allowed to park
— — Update Friday: Last night I spotted this: 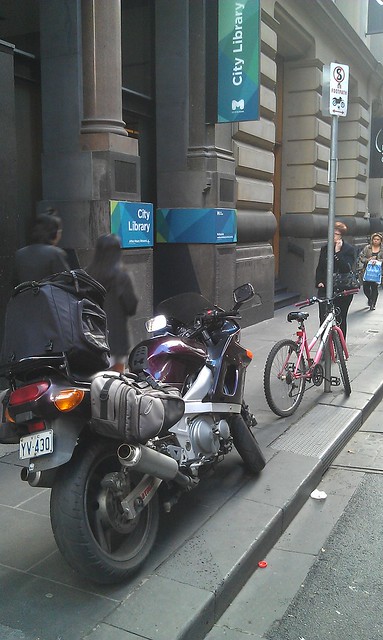 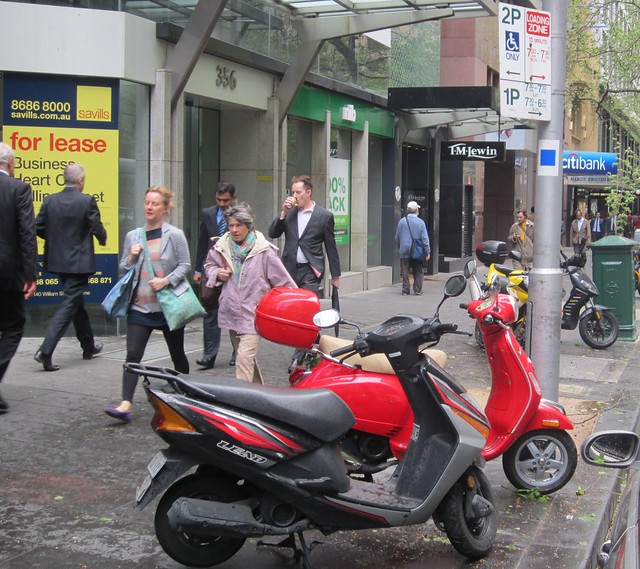 DO NOT PARK where space is reserved for footpath activities such as street cafés
— it’s a bit hard to tell, as most such areas seem not to be well-defined. 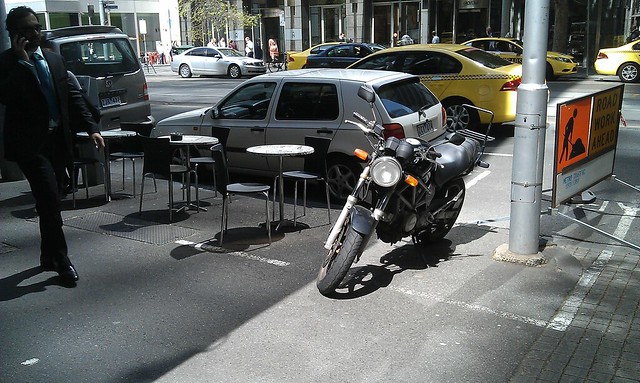 DO NOT PARK on narrow footpaths
— this is far too vague, but based on the second and third points, one could conclude that it means don’t park on footpaths so narrow you can’t leave a motorcycle wheel diameter from the kerb, and a motorcycle length from the building line. This should automatically make any footpath narrower than a motorcycle length (plus a wheel length) out of bounds. 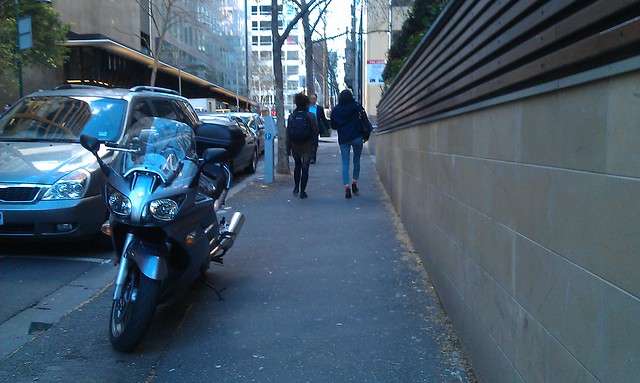 DO NOT PARK on or near service access points, such as manhole covers, post boxes or rubbish bins 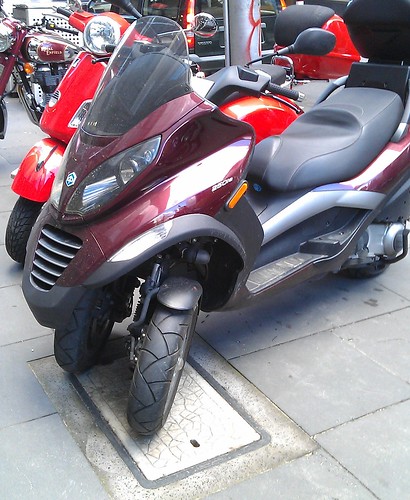 DO NOT PARK near taxi ranks or bus and tram stops 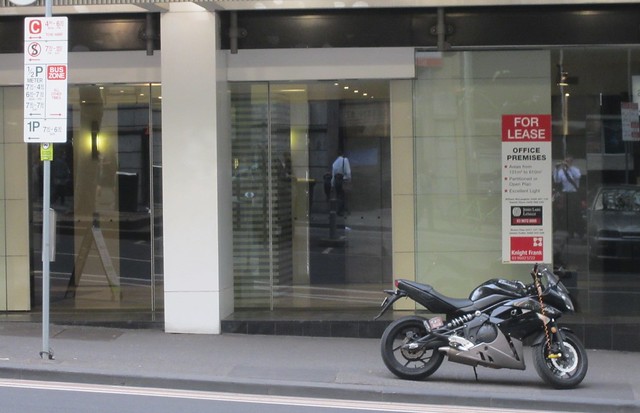 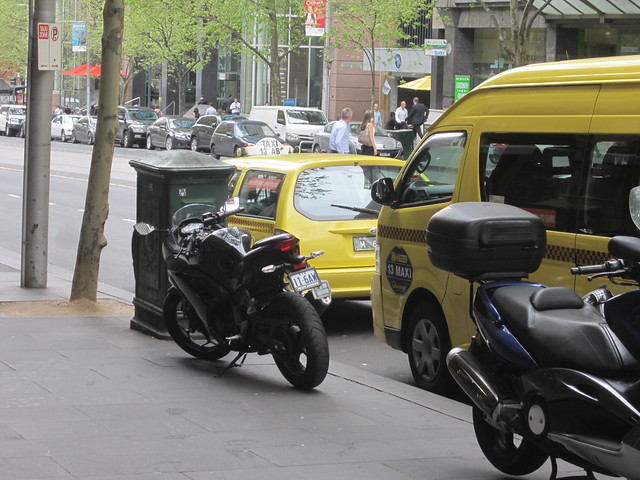 DO NOT PARK where your vehicle could damage the footpath, pedestrian facilities or landscaping
— I didn’t find any evidence of this.

DO NOT PARK within 1 metre of fire hydrants 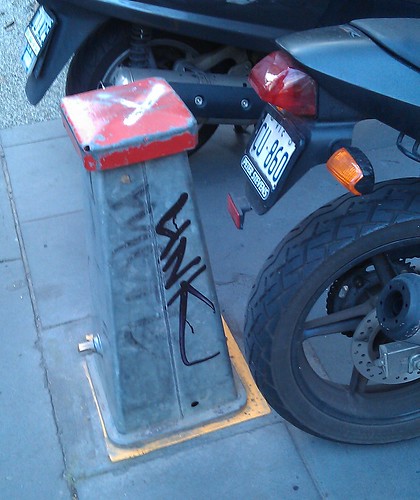 There are just three locations where motorcycle parking is specifically banned:

In Victoria you can legally park your motorcycle/scooter on the footpath (unless otherwise signed), as long as you do not obstruct pedestrians, doorways, delivery vehicles, public transport users or access to parked cars.

Of course, common sense would suggest a few others points, such as… 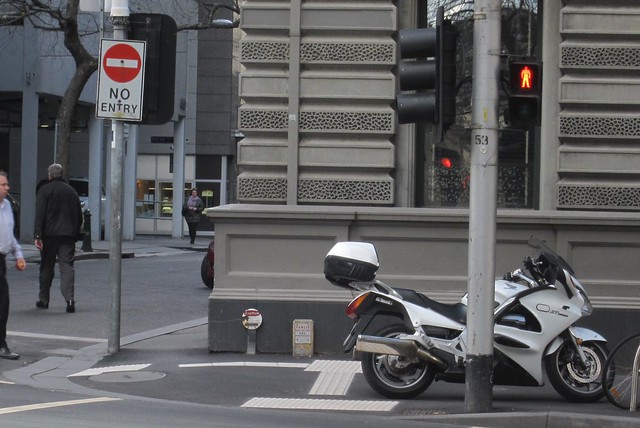 …or block the footpath opposite a tram stop exit 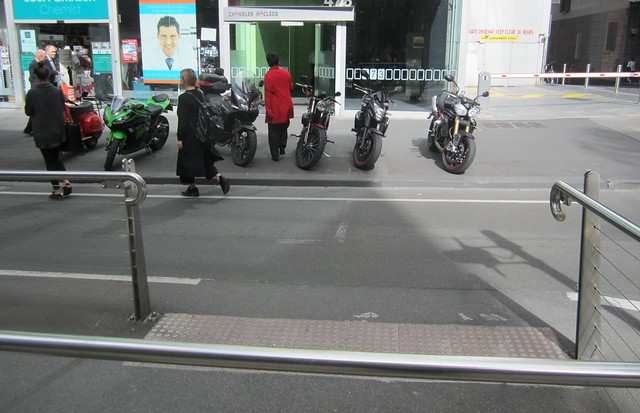 …or park in pedestrian malls 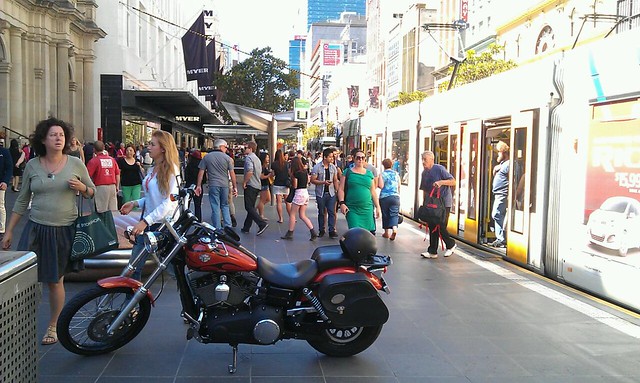 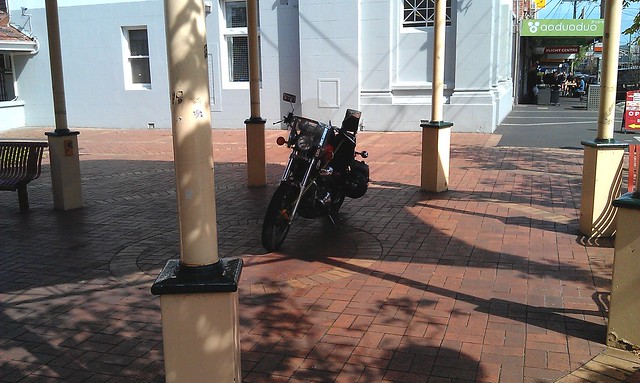 Why does this stuff even matter?

Firstly, I have a philosophical disagreement with the idea of motor vehicles being parked (and driven) on footpaths.

Many CBD footpaths are already congested. As the CBD continues to get busier, it’s going to get worse. In the past ten years, total daily city numbers have grown from 679,000 to about 830,000 — about 22%.

While the number of CBD visitors using motorbikes remains proportionately low (less than 1% — a comment on the previous post said about 1200 per day), obviously as the CBD gets busier, the numbers are likely to increase.

Efficient movement of people around the city means encouraging the most efficient mode: that means pedestrians. But their space is being encroached upon by a relatively small number of other users.

Note that cyclists in general don’t cause these problems because they need to be left chained to something, such as a pole, restricting where they end up parked. Pushbikes are also physically smaller.

There are several problems here, I think:

Firstly, the rules as they stand don’t seem to be enforced, and are widely ignored, or perhaps not even common knowledge among motorbike and scooter riders.

Are they even enforceable rules? Or are they just guidelines? I’m guessing the latter.

Either way, whatever the rules are, riders need to be made aware of them, educated, and then the rules enforced — even if it’s just issuing notices advising of what not to do.

Secondly, the free-for-all just doesn’t make sense in a busy city centre. With pedestrian numbers continuing to increase, and motorbike riders accounting for less than 1% of the total daily CBD population, this is simply not efficient use of footpath space to have them sitting there all day. It probably explains why other capital city CBDs don’t allow it.

In comparison, many local councils have cracked down on footpath trading in recent years because of concerns about pedestrian flows and the vision impaired, and have provided clear rules about where traders can place displays, signs, tables, and so on. There doesn’t seem to have been any such clarity around motorbikes, and formalising the current guidelines and enforcing them would help a lot.

I’d much prefer the policy was changed to allow motorbikes on the footpaths only in defined areas — opt-in rather than opt-out.

There are “motorcycle precincts” such as parts of Elizabeth Street where their presence is to be expected, and there are spots where it works fine, for instance opposite some tram superstops where there are wide footpaths with plenty of spare capacity, and barriers mean nobody needs to park cars or cross the road at that point. 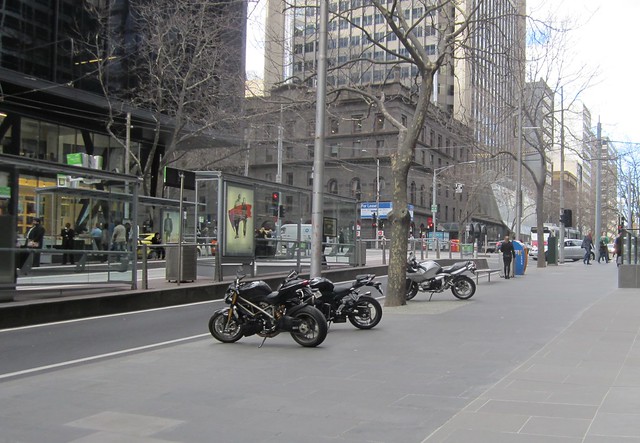 The other thing that should happen is the replacement of more on-street car parking with motorbike parking. It makes sense because motorbike/scooter parking on the street is more efficient use of space than car parking. Plus there’s lots of off-street car-parking, and in any case car traffic needs to be discouraged. 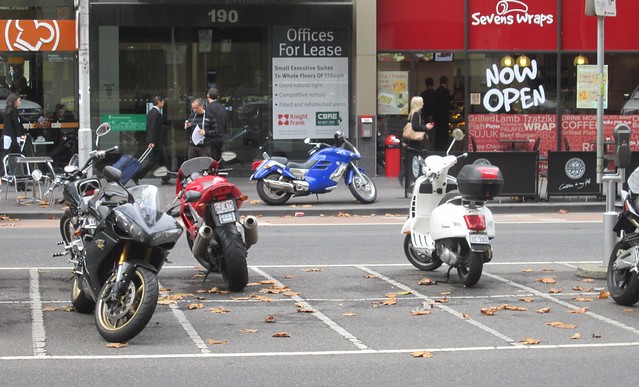 (I’m less sure that motorcycles/scooters are more efficient in traffic… it might be that they take up about as much space as cars when moving. Motorbikes are also, in the main, much noisier.)

If there isn’t a switch to opt-in footpath parking rules, then there should at least be a blanket ban on parking on narrow footpaths (going by the points in the existing guidelines) and bans placed on areas of high pedestrian traffic, such as around the railway stations.

Ultimately though, the City of Melbourne should be prioritising pedestrians on footpaths. They account for the majority of footpath users, with numbers increasing every year, and are the most efficient use of the available space.

When I’ve raised the prospect of a change on Twitter, people cite a motorbike protest some years ago which was probably how the current policy came about. Motorcyclists parked (quite legally) one motorbike per car spot in protest, and the council surrendered. They imply this could happen again.

You know what? The threat of protest doesn’t make it a good policy.

And I think you could predict my attitude to this specific protest — a protest inconveniencing CBD motorists (another minority mode)? Let them. I don’t care one bit.

It’s very much in the eye of the beholder, but what about the heritage and character of our streets?

Beyond problems of efficiency, of footpath capacity… do we actually want every street in Melbourne to be overrun with parked motorcycles and scooters? 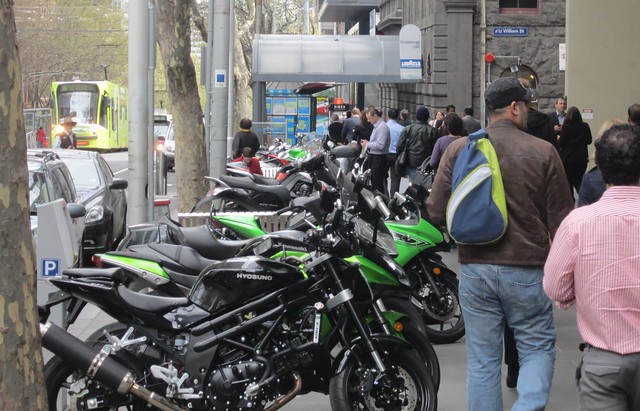 Last night I spotted a violation of parking where specifically signed that you shouldn’t. Picture inserted above.

And City of Melbourne Lord Mayor Robert Doyle has advised me that, as I suspected, they are unenforceable guidelines, not rules.

@danielbowen: Guidelines not really enforceable and not CoM's. Our Parking Officers do issue fines for obstruction.

This remains a problem, and in some spots it appears to be getting worse — recently, at two motorcycle riders have started parking on William Street near Flagstaff Station, where pedestrian crowding is so bad (up to 3600 people per hour) the City Of Melbourne has installed automatic pedestrian counters. What they haven’t thought to do is ban motorcycle parking there — or indeed remove a few car spaces and widen the footpath.

Vic is the only state where motorcycles can park on footpaths. Ridiculous that it's allowed even in very busy constrained spots like this. pic.twitter.com/uSzts1I3Rk

Melbourne, where they allow motor vehicles to park on footpaths so crowded that people regularly walk on the road. How is this logical? pic.twitter.com/OTdGwR5SIc

submissions to the City of Melbourne’s draft Walking Plan in August/September 2014 noted that motorcycles are frequently parked in ways that do not meet VicRoads motorcycle parking guidelines and cause pedestrian congestion and obstruction. Pedestrian numbers in the city are increasing. The draft Walking Plan proposes minimum crowding levels for pedestrians, and includes an action to assess footpaths where pedestrians are overcrowded and take action to reduce crowding.

… but ultimately, makes no recommendations around changing the rules, or even educating or enforcing the guidelines.

20 thoughts on “Motorcycle/scooter parking on footpaths – In a crowded city centre, this doesn’t make sense.”