From the (hopefully) easy to change, but quite beneficial department:

What if they ditched the rule that to touch-on a Myki (without an active Pass on it) you need at least 1 cent, and made it zero instead? 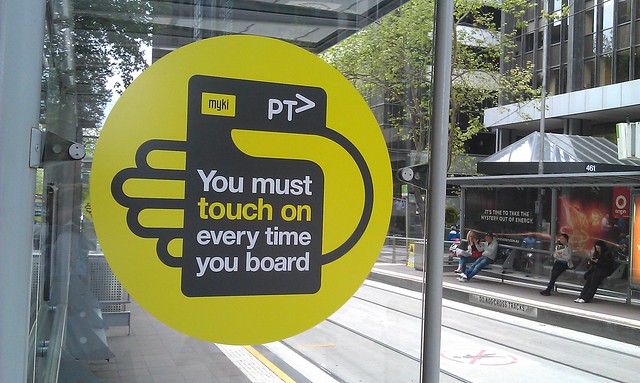 Myki cards would become a de facto single use ticket: You could touch-on, make a single trip, then touch-off, sending the balance into negative. You’d have to top-up if you wanted to use it again. So a single trip becomes $6 for full fare, $3 concession — in other words, a premium from the typical Z1 2-hour full-fare of $3.50.

(It wouldn’t resolve the problems of no single trip ticket on trams, given no sales on-board, and only a minority of tram stops having vending machines, but would help passengers on trains, and buses — assuming they’re still selling cards on buses; this was done at the start of the year but isn’t mentioned on the official info now.)

It gets around the exact fare top-up problem. It’s incredibly confusing that when buying a new card, you have to top-up with a little bit more than the fare. For instance if you have $3.50 on your card, you can’t use the weekend daily $3.50 fare all day, because it stops working when the card balance falls to zero, which might be as soon as straight after one trip.

It would resolve the free travel on no balance problem which famously resulted in thousands of Seniors Myki cards (valid for free weekend travel in Melbourne) being withdrawn and re-issued with 1 cent of balance. This issue also affects others, for instance those with a full fare Zone 1 Myki Pass trying to travel into zone 2 on weekends (which should be free) have problems if their balance is zero.

People might throw the cards away after one trip. That means wasted cards/lost revenue. How much do cards cost? Not clear, though this web site quotes numerous manufacturers in China supplying MiFare DESFire EV1 cards at under US$1 each if bought in bulk. (Is that legit? Are these unauthorised clone products based on that from the NXP/Mifare people, or do NXP just supply a reference design which anybody can manufacture?)

Cards thrown away may not be too much of a problem though, if people are aware that their subsequent trips are cheaper if they hold onto it.

The card cost will need to stay above the cost of a two zone 2-hour fare (currently $5.92), which probably means a price rise this coming January. But I’d expect it to go up anyway, as currently you can run down the balance to as little as one cent and still make one trip.

Am I missing anything?

All you’re missing is why this logic wasn’t applied in the design phase.

@Dave, during the design phase the intent had been to have a single use ticket sold along the reusable cards. http://www.flickr.com/photos/danielbowen/5932386078/

The government only decided in mid-2011 to scrap them. http://www.premier.vic.gov.au/media-centre/media-releases/1195-fixing-myki-to-get-victorias-transport-ticketing-system-back-on-track.html

I just got back from Atlanta where they sell their smartcard for $1. So presumably they cost less than that to manufacture.

Good logic, Daniel.
I think the single use ticket idea was abandoned purely because the previous government thought of it!

With Translink in South-East Queensland, negative balances aren’t as big a problem. Not only can you touch off if your balance goes negative, but you can make other trips until the end of your journey.

Yes, good logic, but how would officialdom react to the idea of travellers being informed that it’s OK to have a negative balance?

I think the MiFare DESFire EV1 is just the IC, not the whole card. Those Chinese manufacturers probably just buy the chips in bulk and then manufacture their own cards with them.

Either that or they’re fake DESFare chips.

I have a commuter club Myki through work… have never put a cent of myki money on it and it works perfectly with $0.00 balance. Double beeps every time I go through but easy to get used to that :)

You forgot that everywhere has a minimum top up of $1 when you purchase the card as well. You can’t just buy a card with no credit. Sure, that can be changed, but considering most station staff dont know that they can swap mykis over the counter, and bus drivers don’t know that they are meant to be able to sell mykis on board…..

@Mike, I’ve received info that suggests the Vic govt paid about $3 per card for Myki.

@Carly, you can already touch-on and off a Myki that has a valid Pass (such as a Commuter Club yearly) on it.

@Daniel J, is that right? The web site seems to contradict it. “When you buy a myki it has no value on it, so you need to top up before you travel.” http://ptv.vic.gov.au/tickets/myki/buying-your-myki/