For some years now we’ve named our home computers after characters in Tintin.

First we had Tintin and Snowy, both desktops.

Snowy was replaced with Haddock.

The two of them were joined for a little while by Nestor, which was called that because it was a server. 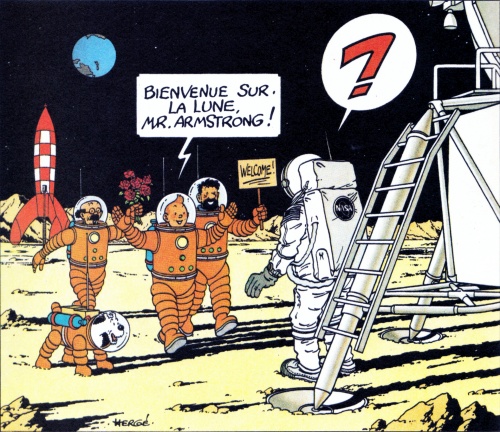 Haddock broke down (probably a motherboard failure, I suspect), and has been replaced by a secondhand 2008-model Mac Pro, which given it’s much brainier, we called Calculus. (If you ever manage to get a secondhand Mac Pro, I recommend them. They make excellent desktop PCs, even if you run Windows, which the 2008 and later models do easily via BootCamp. This beast may be old, but the build quality is fantastic, it’s still fast and rock solid.)

Now Tintin is set to be replaced, by another Mac Pro. The question is, what should we call it?

One idea is that, given the two Mac Pros will be near-identical, we rename the existing one and call them Thomson and Thompson, but let’s face it, that’d be too confusing.

Oh, and while I’ve got you, can any Mac people recommend a TV tuner (preferably dual tuner) that will work with the Mac Pro in both OSX and Windows/Media Center?

8 replies on “Computer names… what’s next?”

I might be displaying a massive lack of imagination but our computers are called things like: “the upstairs PC” and “the laptop”. The kids’ computers are referred to by the respective child’s name.
I did name my first car, an HG Holden, Horace G Holden. But that convention stopped whenI bought another car.

@Roger, this isn’t just how us humans refer to them, it’s also the system name (in Windows: Control Panel, System, Computer name) which for geeks is important when using Remote Desktop, Ping etc.

They should broadcast it on TV every 10 years for each generation of kids/kidults.

Whilst I doubt he was a recurring character, you’ve supplied an a nice answer right in your post. I suggest Mr. Armstrong.

It’s a pity the existing MacPro wasn’t called Haddock. Then you could have called the other Castafiore, but you might have had ongoing connectivity problems between the two.

It cracks me up the way that machine names have changed over the years. Machine names came in as they were easier to remember than IP addresses. In the early 90’s everyone followed a themed naming systems similar to your home network. Then this changed to naming machines after their function to make them easier to work out for a newcomer i.e. printserver01, financeserver02. Then security realised this makes it easy for hacker to target high value servers and went with generic naming conventions which are harder to remember than ip4 addresses, making machines names nearly useless. At least with IP6 addresses they’ll become useful again.

Instead of Thompson and Thompson you could go with Dupont and Dupond?

I built one of my first servers whilst living in Belgium, so since then all computers in our house have been named after Belgian beers (Duvel, Hoegaarden, Leffe etc). We do have one exception which was built while we were in Germany so that one is Wichtel, a German beer.

I know someone who named their wireless network their neighbour’s address.