One thing I really really hate about spammers is how they often insist on the bottom of their email that you’re receiving their crap because you subscribed to it.

Along the same lines are these types of letters, one of which I received yesterday. The envelope makes it look official, non-party: 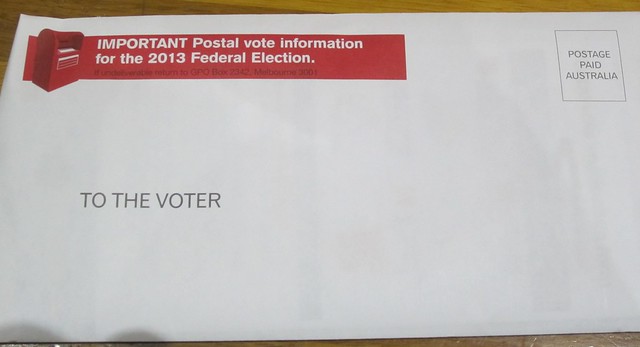 Inside it’s clear that the letter is party-political. Stop the boats. Build more roads (they don’t mention that they specifically refuse to fund public transport). Free you from the carbon tax (you know, the one almost every individual was fully compensated for, and is having the desired effect of cutting carbon emissions). 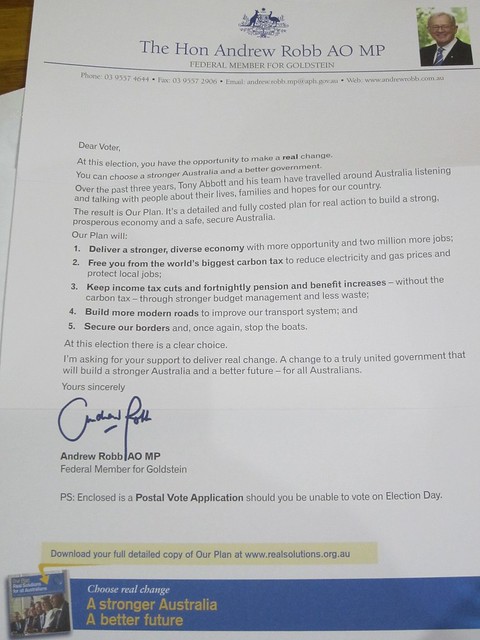 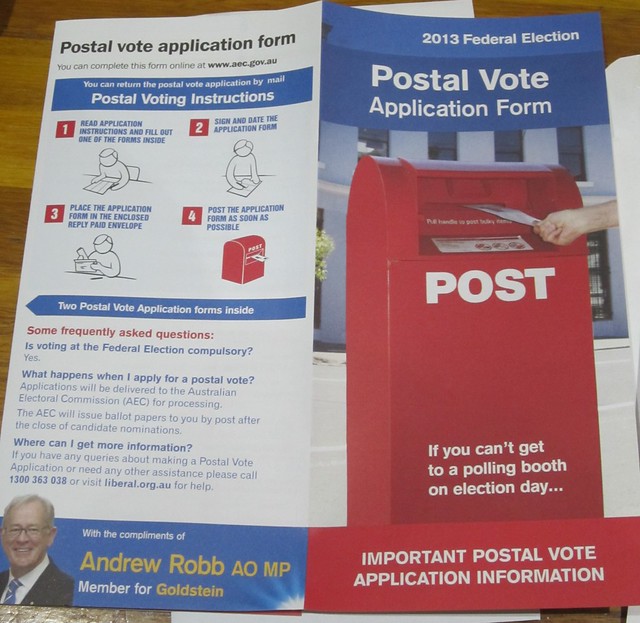 …As Crikey noted in an article yesterday, it may look like a Postal Vote Application Form, but actually it’s a data-gathering exercise for the party involved.

Crikey adds that the information does get sent to the Australian Electoral Commission, but often there can be delays, and there have been cases in the past of forms being stockpiled, and some even get “corrected” along the way by the party.

The extra twist of the knife? Taxpayers/voters are actually paying for these letters.

The Liberals aren’t alone in doing this. Tens of thousands of people use these forms, via various parties.

Don’t be fooled. If you want to apply for a Postal Vote, do it via the AEC.

5 replies on “Politicians and their fake Postal Vote forms: don’t be fooled #AusVotes”

I also received one of these, but I live in a Labor electorate so my letter was from Tony Abbott rather than the local Liberal candidate. The rest of the form was identical. I agree, these “fake” forms are dodgy.

Daniel
we got the same letter – and I knew what it was since we have got similar letters prior to every election over the past ten years.
Don’t open, just file in WPB.

I am not sure about the Liberal Party one, but the Labor one does say you can fill in the postal vote application online, which is what I will do.

I got forms from both Liberal and Labour. I compared both to one you can download from the AEC site, both have the AEC address within the form. But I would say the liberal is more deceptive.

The Labour version copies the AEC form (without AEC branding) and adds in a couple of green background pages about the current member, and the reply paid envelope is to the member. The form does also say that the member “undertakes to forward completed applications to the AEC”…

The Liberal one (as seen in Daniels photos) is much more subtle with only a few additions to the AEC form. The kicker is that the reply paid envelope is to “Postal Vote Application”, but not the AEC reply paid address and no note about forwarding like the Labour one.

Both of mine were also addressed to me (not just Voter) so I would have opened them, but they still went straight to the recycling pile.

What happens if you get several of these, and send them all back ?