Last Saturday some of us from the PTUA did a tour of the Regional Rail Link project. Here are some photos and notes.

The RRL project, for those who haven’t being paying attention, is basically a brand new railway from somewhere west of Werribee, through new stations in the fast-growing suburbs of Wyndham Vale and Tarneit, then joining the Ballarat Line west of Deer Park, heading in through Sunshine to two new platforms there, and a new pair of tracks from there into the city, with extra platforms also at Footscray and at Southern Cross. 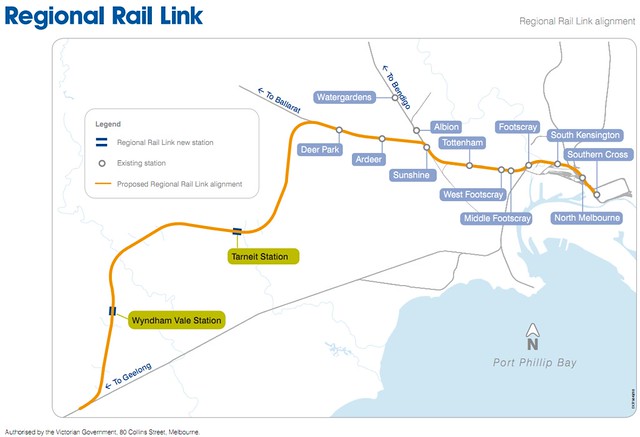 So it has two goals: to separate V/Line and Metro trains from Melbourne’s west, and to serve new suburbs.

The project, almost $5 billion in total, is predominantly funded by the Federal Government. Around the traps I first heard it mooted in late-2007, though reserving a corridor north of Werribee had been flagged in 2006. It was officially proposed in the 2008 Eddington study, then popped-up again in Labor’s 2009 Victorian Transport Plan, gaining funding as part of stimulus spending to help avoid the Global Financial Crisis. For a while it was a bit mysterious as it was well outside the Urban Growth Boundary… then, not completely unexpectedly, the UGB moved west to encompass it — could it be that for once, urban planning and transport were in sync?

Ironically the tour started an hour later than scheduled because every single person attending was held-up by disrupted train services, on various lines. Eventually we got started at Footscray, then headed for the city end and made our way back outwards.

At Southern Cross, new platforms and track are in place, but signalling work is still being carried out. It may be that the extra platforms (15 and, out in the weather, 16) will come into service before the rest of the project is finished.

Some trains will go into the new platforms; others will use the flyover near North Melbourne, which is being strengthened, to head into platforms 1 to 8. Extra track over Dudley Street will help V/Line trains stay completely separate from suburban services, which would have otherwise caused a bottleneck. A number of old freight lines in the area have been moved around as well.

The new platforms at Southern Cross. 15 is inside. 16 is outside the glass wall, and may be less pleasant in bad weather! 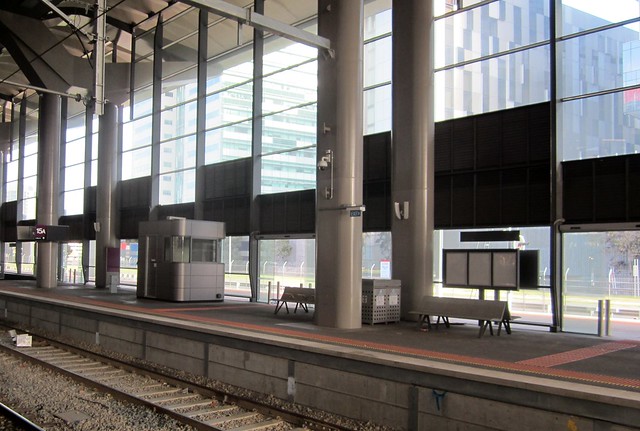 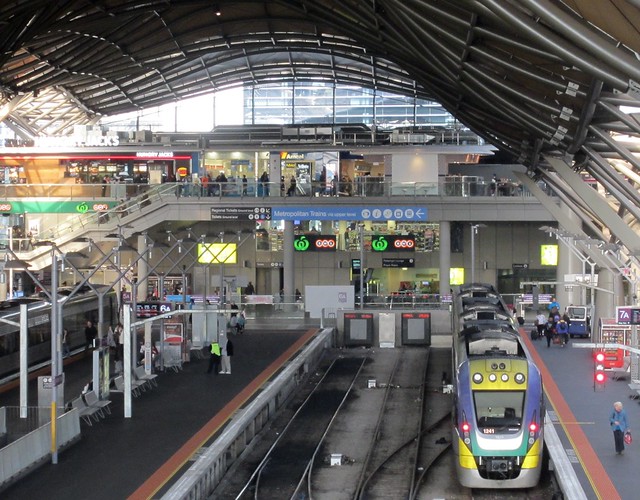 New tracks at North Melbourne heading for platforms 15/16. The flyover to platforms 1-8 is being strengthened and having emergency pedestrian walkways added. 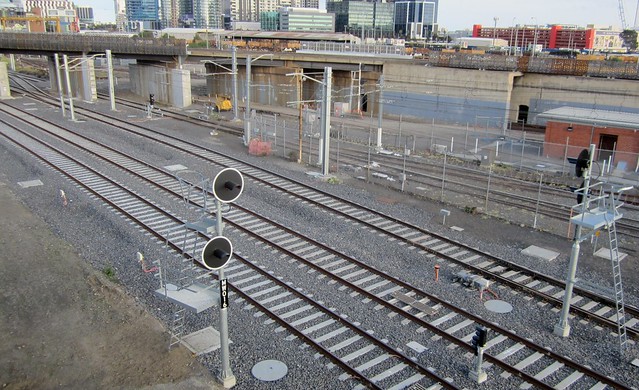 Heading back towards Footscray on a train, we looked at the works on the south side of the line, with the two extra tracks taking shape rapidly. They’ll go over the Maribyrnong River on a new bridge (hey, a new river crossing!) then on a flyover over the current tracks to Newport, which will be shifted south a bit in the cutting coming into Footscray. The suburban tracks to Sunshine will be moved to the north, to go into the two new platforms at Footscray, with the V/Line trains using the (to be) middle platforms.

At Footscray, the “colander” bridge is being extended over the extra tracks, and has apparently already had some weather-proofing added to it, to reduce the amount of wind and rain that gets in. Footscray station is losing all its parking, but that’s all to be replaced (and more) by spaces going in at West Footscray. Fair enough — while I’ve used Footscray’s parking on occasions, it’s a central activities district — the worst place to waste land on parking. They’ll need to improve bus/tram connections from some directions though.

The most important thing? The doughnut man is staying. In fact he’s getting a brand new kiosk! A second kiosk will be in the forecourt area, to help provide more activity in the area. The bridge will eventually have ramps, escalators and lifts.

Footscray station showing the bridge being extended. On the left you can see the new platform 1 station building being constructed. 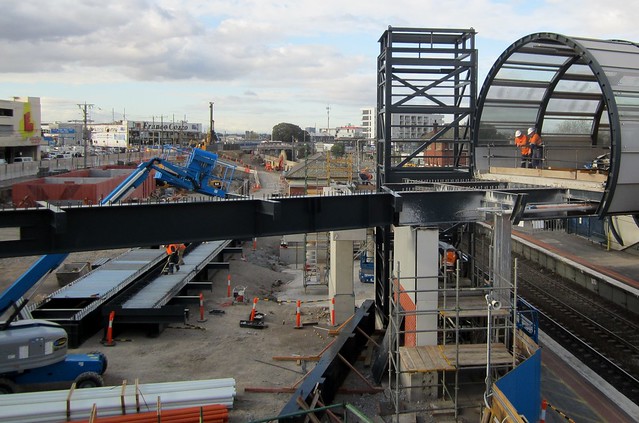 The various road overpasses in the Footscray area are being widened to cope with the extra tracks. 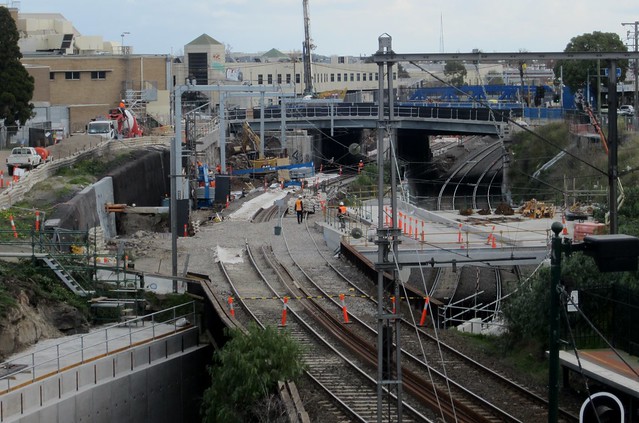 Middle Footscray to West Footscray has long been one of the shortest distances between two stations — the latter was built there to serve the footy ground, but this is no longer used. This project is moving West Footscray about 200 metres further west. Well, when I say moving, I mean replacing with a brand new station.

A lot of this stretch of the line is in a cutting. Notably, where it would be difficult to add them later, stanchions are being installed to cater for later electrification. (Electrification and duplication to Melton has been mooted for a while.) 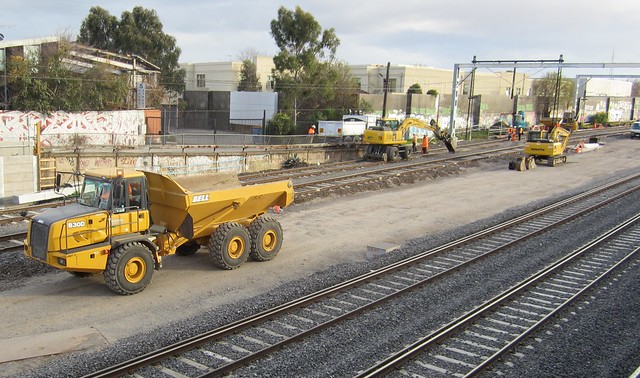 Sunshine will get an upgrade — a new aboveground concourse — and two additional platforms.

It’s unclear how many V/Line trains will stop there. It’s been confirmed to me that the infrastructure will permit it, but the infrastructure guys don’t necessarily know what the service planners are thinking. The best indication we have at present is from the Rowville study, which indicates that most trains from Geelong, Ballarat and Bendigo will run express through Sunshine, but that trains originating at Melton and Bacchus Marsh (2 per hour off-peak, 3 per hour peak) will stop there. There’s a good argument for having more trains stop there, given development in the area, including the Victoria University campus, as well as interchange between V/Line trains.

The junction just west of Sunshine is where trains from Melbourne to Ballarat and Geelong trains will head west, while Bendigo trains head north-west. It’ll be a flat junction, so some potential for delays here… hopefully it can be upgraded later if needed — I’m not sure; space may be tight, given nearby roads.

Just west of Sunshine, the two level crossings on Anderson Road (one for trains towards Ballarat, one towards Bendigo) are being grade-separated. The Bendigo tracks will have a short section of additional track before joining the suburban line to Sunbury. One day they might get their own lines all the way, but for now they’ll at least have space so that trains from Bendigo to Melbourne can stop and queue to enter the RRL tracks if they need to, without delaying Metro trains behind them.

Towards Ballarat, the existing V/Line tracks are used. There are some minor upgrades going on such as the installation of automatic pedestrian gates where they don’t exist at remaining crossings. (I’m not sure; this may include the location where a lady was killed by a train in 2008.)

At Deer Park West the Ballarat line will have a new junction, with Geelong trains diverging here down through the “greenfields” section towards the new suburbs.

Near the new station at Tarneit, a lot of houses are built, or under construction, at least on the south side. Real estate agents have clearly identified the railway as a selling point. (I wonder… $360K for a house-and-land package 500 metres from a brand new station and a planned shopping centre could be a pretty good investment, if only I had the money.) 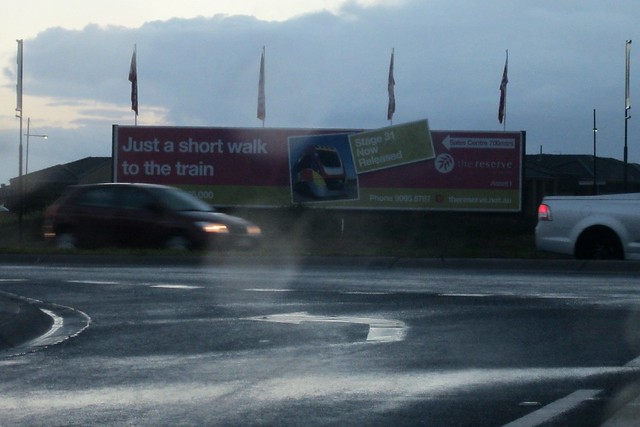 Various bridges are being built, including this rather impressive one over the Werribee River:

At this point of the tour, it was starting to get pretty dark, emphasising how big this thing is. My photos of Wyndham Vale station — a big hole in the dark — aren’t worth publishing.

Tarneit and Wyndham Vale stations will have bus stops close to station entrance. Both will have several hundred parking spots, and provision for more later (which costs more money, of course). Most new and rebuilt stations are designed to have staff/booking office areas overlooking platforms, to help security. Where lifts are provided, ramps will also be available.

Both new stations have provision for extra platforms and two additional tracks to be added at a later date. Cuttings (eg either side of Wyndham Vale station) haven’t been built for four tracks just yet, but are big enough for the two tracks plus space to work on expanding later without encroaching onto those two tracks.

From the new suburbs, the RRL line continues south from Wyndham Vale, and will join the existing Werribee to Geelong line with a flyover (helping to prevent delays, including from passing freight trains on the standard gauge line) at a place called Manor, west of Werribee.

Early versions of the project plans included a rail connection from Werribee to Wyndham Vale, with the possibility of electric trains being extended there to their own platforms, providing an interchange, and a stabling yard a north of the station. But that’s all in the future — it’s unclear how existing passengers between Werribee and Geelong will be catered for.

I’m told the new lines will be signalled to handle trains every 2 minutes from Sunshine to the City. The usual formula for reliable running is a 20% reduction on theoretical (30 trains per hour) capacity, making 24 trains per hour.

The Metro tracks are getting all-new equipment, but will remain at their current 155 second headways (apparently some trains do run closer today, thanks to some clever use of the TPWS that’s fitted, I believe, to the V/Line fleet and on all V/Line commuter lines.

Between Sunshine and Manor, the signalling will cope with trains every 3 minutes — so for practical purposes, 16 trains per hour. Signalling equipment going in is capable (where relevant of course) of conversion to work with next-generation in-cab signalling.

The speed limit will be mostly 80 from City to Sunshine; 160 further out, but some lower limits for junctions and flyovers. Official modelling suggests no longer travel time for Geelong line.

My back-of-the-envelope calculation suggests 13 km at 80kmh = 10 minutes, and 34 km at 160 kmh = 13 minutes … for a total of 23 minutes. Expresses will stop once on the RRL line — at Footscray. Stopping trains will stop up to three times in this section, adding up to say 6 minutes, for a total of about 29 minutes.

So it should be pretty competitive with today’s travel time via Werribee and Newport. It’s a bit hard to compare current times, but in one case the train from Warrnambool inbound in the evening takes 35 minutes from Werribee to Southern Cross (stopping only at Footscray).

Apparently the RRL project has an excellent safety record. Only three incidents have been recorded — sounds like one was a guy who twisted his ankle, and the other two were white-collar workers in project offices — I can’t quite remember the details, but it was along the lines of paper cuts!

All RRL platforms will be 250m long to cope with long V/Line trains (8 carriages?) — including the new Southern Cross platforms.

In many spots, bike paths (or provision for later bike paths) will be provided along the rail alignment.

Freight will not be permitted on the new line between Manor and Deer Park – sounds like the relevant authorisations under noise standards only cover passenger trains.

There’ll probably be some opportunities to start using bits of infrastructure before the entire project is finished, eg the additional Southern Cross platforms, which will provide some big benefits — currently V/Line and Metro mix it up on platforms 13 and 14.

The web site is worth a look; a lot of info on there, including (as posted recently) some rather good video flyovers. www.regionalraillink.vic.gov.au. Also bear in mind how it fits into the broader PTV rail plan.

Overall I’m impressed. Of course, some issues remain… particularly for current regional passengers who want to use Werribee and North Melbourne stations, and the cost is huge, but it’s great to see this project taking shape, and for many in Tarneit and Wyndham Vale it’ll help provide transport options other than driving their cars everywhere.

And, memo to self: next time I go take a look, I should take notes as well as photos. The project is so big I’ve probably forgotten some details. Hopefully I haven’t got anything wrong above — comments and corrections very welcome, as always!