The thump at Glenhuntly made me look up.

Further up the train carriage, passengers were milling around. One of them had taken a fall — tripped in the doorway, it appeared. It was a senior gentleman. Others helped him up and into a seat.

The train doors had shut and we were starting to move. They conferred, and agreed to use the emergency intercom. One of the ladies went for it.

The driver responded with the business-like demeanour of someone who has responded to too many false-alarms. The lady explained what had happened and asked that an ambulance be called. The driver said he’d get one, to meet the train at Caulfield. A few minutes later this was confirmed by Metro’s Twitter team:

@danielbowen Ambulance has been called to meet train at Caulfield.

On arrival at Caulfield, two passengers helped the injured man, who I’m going to guess looked at least in his 70s, and quite dazed, off the train and over to a bench. Intercom lady went up the platform to speak to the driver, who came down to check. We waited, and — since it appeared everything was being handled well — I pondered if I should jump ship and change platforms to another train to get to work.

After a couple of minutes a station staff member approached and went to sit with the man until the ambulance arrived. The train then departed.

Some thoughts on this…

Well done to the numerous passengers who helped him, and the driver and other staffers for getting the ambulance. I hope the gentleman was okay, but it heartens me that people immediately came to his assistance. I would have helped too, but with half-a-dozen closer doing so, didn’t need to.

People sometimes talk about our city getting bigger and that with this we lose our humanity. I don’t think it’s true.

It’s lucky Caulfield is a staffed station. If not, the driver being the only staff member present would have had to have minded the injured man until the ambulance arrived — something I’ve previously seen happen at Gardenvale. In peak hour traffic, who knows how long that might have taken. 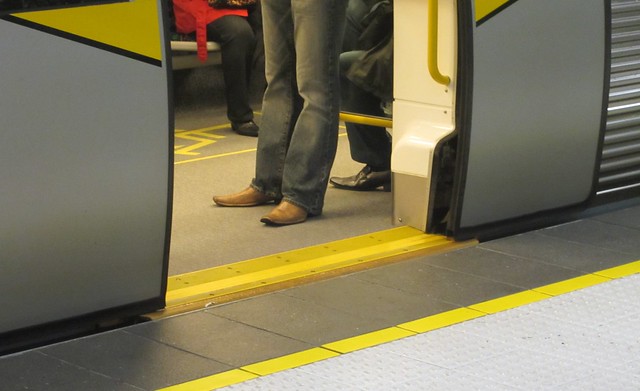 Finally, it’s worth noting that some train networks such as Perth are engineered to a high standard, and at most stations don’t have a significant gap or step up into the train. As yet there appears to be no system-wide plan to fix this in Melbourne.

9 replies on “Incident at Glenhuntly”

We had a man collapse on the train in the morning (poor man, in his seventies, was on his way to have cancer treatment). We (me and a nurse) called the ambulance and got off at Jolimont where the staff were fantastic! They all looked after him and stayed calm. I was so grateful to the rail staff, and thought how awful it would have been without them. They were able to take us into a room which gave this lovely old man some privacy.

I often wonder, if they should have some kind of a ‘sick bed’ at selected major railway stations like Caulfield. You would have one or two duty nurses there too.

You would only need to do some major locations. Should the gent have fallen at say Patterson, he would need to ride the train all the way to Caulfield to get such help.

On the other issue, I agree that platform levels are something of an issue. There needs to be something of a reconstruction program to be conducted around the system.
++ Too many curved platforms, where the driver does not have a proper eyes view
++ The platform slopes towards the edge, which has demonstrated to be an issue with prams.
++ And the edge in relation to the train.

Do we think we may get the same kind of a project as portrayed by the tramway systems platform stops, but for upgrading the railway stations?

Further to Perth being a first class system;

++ how they have done at railway level crossings is an issue too.

The way of how the platform is ‘on the away side of the road’ therefore it does not matter if a service is local nor if it is express. The delays and trigger are all the same.

++ They are making use of the freeway medium strips for railways.

While I also support the local railways we have, it would be a great help to both train passengers and level crossing motorists as you could divert some Dandenong line services via the Monash freeway for a ride into town.

It’s great that people helped. It’s easy to feel a little powerless in those situations.
I’ve stepped in to help two people on trains in my lifetime. In both cases they were just drunk (and on one occassion, it was 6:45 in the morning!)

What would the robot train in Sydney do ?

Level entry at platforms changes maintenance requirements and, more importantly, needs all train floors to be the same height above the rail head. This may take many years to implement, but needs a firm decision in the first place.

I remember being very impressed as a child (in the early ’80s) that train floors were always level with the platform. Now I only got on and off in Ringwood and the city (Museum usually), but I remember seeing it. Either I’m bonkers or it used to happen with older trains. Now they’re nearly all a step up. I had assumed it was level by design but apparently it’s not. What’s happened?

The gap at Heyington station is huge too, but that station is already a disability worst nightmare! Doubt it will ever be fixed too.

what was up with the old man? Did he need the hospital or just to sit down a chill for a little?