The claims that the East-West link would somehow help the road network cope with yesterday’s horrible Citylink accident are truly mystifying. It really does appear as if the motorway boosters have tried to make use of this high-profile event to promote their cause in the hope that nobody thought too much about what they were saying.

“You see it all the time if we have a major collision on the West Gate Freeway, the Bolte Bridge, the Tullamarine or the Monash and the whole city grinds to a halt. This crash has really amplified the need for the East West Link and a complete network of freeways. We need an alternative route,” he said.

One look at the map shows why this isn’t the case. 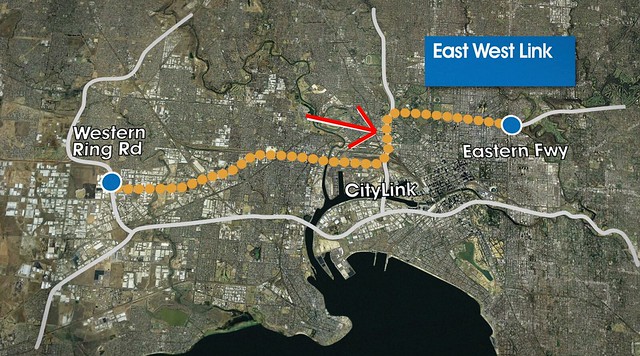 Apart from the fact that “alternative routes” have their own traffic to deal with, in this case the East-West link would have been no help whatsoever. Why? Because the planned East-West route includes the section of Citylink where the crash was.

The presence of the eastern connection in particular would have made it worse, because it would have brought their own traffic into the picture. Traffic coming in from the eastern suburbs and wanting to head south on Citylink (to head towards the Westgate bridge or anywhere else south of Flemington) would have been joining the traffic caught up in the snarl.

Their only alternative motorway route they could have taken would be to head north via the Tullamarine, then the Calder then the Ring Road, then finally onto the Westgate. For a trip from say Flemington to Spotswood, this would blow out from 9km to 34km — hardly a realistic alternative, particularly in the face of that route’s usual traffic plus other displaced vehicles.

As one commenter on the 3AW web site said yesterday: “Thank God we don’t have the East-West Link, otherwise traffic would be backed up on the Eastern as well!!!!!!!”

Even on the best of days, this section of Citylink is congested already at peak times, simply because it is a completely inefficient way of moving people. Add extra traffic — even in the absence of a major disruption — and it would become daily gridlock.

Don’t be surprised if the EW link ever gets built that the road lobby immediately start asking for the next alternative route to link them up — yet another new freeway connection through inner-city Melbourne.

Of course, one should note Negus’s comment was not necessarily about this particular event, but more about wanting a complete network of freeways. Because apparently the best solution to something that doesn’t work is to build more of them.

5 replies on “One look at the planned EW route shows why it would have made yesterday’s #Citylink mess worse, not better”

The accident actually took out the only real alternative – the Upfield train line. Since it’s not reliant on, or part of, the road network, it was unaffected by the accident. Until they had to suspend the trains so the cranes could lift the truck off the tollway. Oops.

Great post Daniel… could not agree with you more. Also, thanks for the link to RACV alternatives.

That Parkville tunnel link, (as I like to call it) would have the advantage in diverting traffic of which comes down from the airport heading to the city.

That traffic, which would be heading out Dandenong way, would have been able to get along Eastern Freeway and then Eastlink.

However as you have expressed, it would not have done any good for motorists travelling between Doncaster and Footscray.

My ‘Alex Tangent’ bus routes idea would be the brainy thing to do here.

I deliver catalogs in the Essendon area and this week we have an 8 page tabloid called “East West Link News” to deliver. This has lots of irrelevant pictures and a few words to tell us how good the link will be. It only talks about the eastern section from Eastern Freeway to Tullamarine Freeway somewhere near the Flemington Rd Bridge.

Also, normally we don’t deliver to places that have a ‘no junk mail’ or similar sign, but occasionally some things go to everybody and this is one of them. I think its only governments bodies that can override the no junk signs.

@Paul, thanks – I hear around the traps that people have started receiving their flyers.