The Frankston line is to get upgrades worth $100 million — signalling changes to allow X’Trapolis trains to run, more shelter at stations, better CCTV, and better passenger information, including about connecting buses and trams.

The Premier, Public Transport Minister, local (Coalition) MPs, heads of PTV and Metro and even the Mayor of Glen Eira were at Bentleigh station this morning for an announcement. 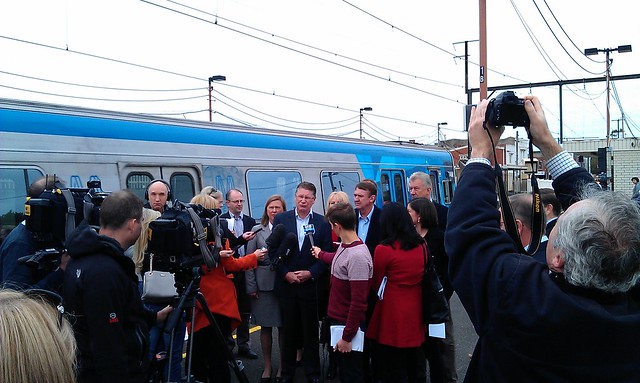 I heard it was happening, so decided to ambush the press conference and listen in. (Just like old times.)

“The Coalition Government’s doubling in train frequencies to every 10 minutes during the day on weekends on the Dandenong, Frankston and Ringwood lines has been successful, and now it is time to roll out further improvements,” Mr Mulder said.

This all sounds pretty good.

In fact, it sounds like precisely the sort of upgrade which should be carried out on lines across the network.

Along with the ten minute trains now seen on the line every day, a good amount of shelter, good lighting and CCTV and real time connection information is not unreasonable to expect on all our rail lines.

I had a quick chat to Andrew Lezala from Metro — it seems the acceleration of the X’trapolis and Siemens trains are similar, so they’d like to predominantly run those on the Frankston line, and tweak the timetable to match.

Presumably this means Comeng trains will go elsewhere — and it would also mean the Williamstown and Werribee lines will also get X’trapolises, since most Frankston trains through-route to there.

More services — we’ve already seen ten minute services every day on the line during off-peak (though few people know about them) — better than any other line in Melbourne, so I think it’s fair enough to let that be for now. But peak could do with a boost to cope with crowding and a clean-up of peak shoulder would help too. 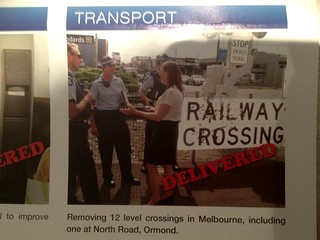 Grade separation — North Road grade separation is coming along (though is not quite “delivered” yet, as a flyer from the local member recently claimed), but no others on this line are proposed at present. The Premier and Minister had caught the train to Bentleigh, and when I had a chat with him, the Premier noted the extremely slow speed over the Glenhuntly train/tram crossing. I think he may have made noises about improving it, but I’m assuming this does not amount to a promise to grade separate!

Southland station — One of the journos asked about Southland. Terry Mulder said that because it involves building on land owned by the shopping centre, they are in negotiations over that. He seemed to also say that it would happen soon, without giving a firm time line, but it did say it would definitely happen.

Station staff — Nup. They’re still pushing the PSOs policy, even though much crime happens before 6pm, and many stations see little or nothing happen.

Connections — The upgrade will include real time information about connections, but of course one of the things lacking is the frequency of those connecting services. Passengers in Glenhuntly are lucky enough to have trams every 10-15 minutes every day, but those relying on buses see mostly hourly weekend services, and some (such as the Bentleigh to Brighton end of the 703) don’t run on Sundays.

When will things start to happen

It’s hard not to see that this package of upgrade works is aimed squarely at the row of marginal seats along the Frankston line. As such I’d be surprised if some of the more visible changes don’t start to happen in the next 12 months, well in time for the election in November 2014.

With trains every ten minutes, better realtime information and station shelters, enhanced CCTV, more reliable services… sounds like just the sort of thing that should be rolled-out across the rail network.

But $100 million is also a lot of money. For instance, yesterday it was announced that a new high school in the Mernda/Doreen area would be built… costing $11.5 million. Some are pointing out that $100 million would pay for duplication on some of the single-line sections of other lines, which would make a huge difference to reliability.

16 replies on “Frankston line: $100m of upgrades coming. What’s included, and what isn’t?”

Hawksburn, Armadale, Toorak, Malvern?
Anything for those poor saps who get few trains, no staff and unable to board in am peak as it is?

Good question. They are part of the line, but it’s not clear if they’re included. (The seat of Prahran was another marginal, so given the pork-barrelling that’s going on here, you’d think so.)

I noticed that your title on the TV news was “Transport advocate”. Did you suggest this or did ABC news slap that on?

@Roger, I suggested that, since I no longer speak for the PTUA.

Does that mean Burnley and Clifton Hill groups will still have Comeng and Hitachi’s rattling around when the order completes?

Would love trains more often than the current every-20woo18!!!1!-minutes-if-they-turn-up-at-all that a certain line gets in peak hour. But no marginal seats here, alas!

It would also rule out access on the western side of the station for the local residents. Admittedly the pedshed would not be all that big on that side of the station, without pedestrian cut-throughs being built, because of the layout of the streets.

Wasn’t the issue with X’Trapolis trains not being on certain routes due to the position of the driver being different between Siemens and X’ trains, and therefore things like monitors and mirrors wouldn’t be visible?

3 reasons Xtrapolis trains will not run on the frankston line;

1) Frankston trains run cross city on weekdays meaning they would need to run to werribee/williamstown aswell. This will increase cost of signalling upgrades for this purpose as they would need to upgrade everything out the other side aswell to accomodate this
2) Xtrapolis trains are speed restricted to max 90kph, something to do with failing a braking curve at high speed (they dont stop well is what i took from that) werribee line is high speed 115kph
3) Metros new training scheme; Under the old scheme trainees learned all lines and all train types. Under the new scheme which started not long ago Trainee drivers only learn the south side of the network which at this point in time only runs Siemens, Comeng and Hitachi Trains. New Trainee Drivers are not being taught anything about the Xtrapolis trains or the Hitachi. So if this were to happen it would screw with their new training scheme and create more problems

I hope they don’t “improve” the shelter like they recently did at Newmarket. Replaced the nice cantilevered awning with what looks like a cheap shearing shed only 2/3 of the size of the original.

@Archi – the replacement awning at Newmarket station is a temporary fix, presumably due to the rest of the station being structurally unsound:

Hi, I board the train at Edithvale and travel to Parliament every day.
I wonder why the train fills up at Bentleigh and empties on the way home.
Cynically, is it because Bentleigh is the last zone one station and people travel to Bentleigh to validate their zone one tickets?
I think it must be a bummer to live and board at Patterson.
I think something similar happens at Brighton Beach.

I notice Parkdale station’s refurbished staff hut/office thingy has been finished for a while now but no sign of staff.
What’s the bet they turn up just in time for election coverage in November? Problems on the Frankston Line were credited with changing the govt last time round.
Might be time to revisit this issue.
Cheers.

Any news on the primitive railway crossing at Frankston , no safety for pedestrians …they can and do walk and RUN straight across when trains are approaching .. frequent trains but cars waiting up to 20mins to cross because of the multiple light system also at the street Cricklewood further along towards Frankston central .. a primitive pedestrian walk over no safety and has a major bus stop adjacent!!!!

when will the Xtrapolis start to run on the frankston line?