A regular suggestion that pops up is that Melbourne’s zone 2 should be merged with zone 1, making the whole metropolitan area a single zone.

No surprise that everybody wants cheaper fares… but is it a good idea? 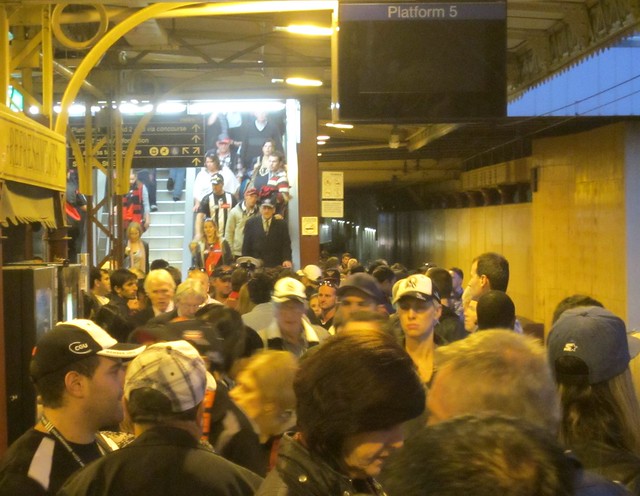 No shortage of footy fans on the trains on ANZAC Day, in part thanks to discount fares — but the crowds weren’t well-handled after the game

Price cut: The biggest beneficiaries would be weekday travellers who cover both zones, particularly those coming from the middle and outer suburbs into the CBD, saving $4.84 per day if on Myki Money, or about $760 over a year if using a Commuter Club yearly.

Car park pressure: It would remove the problem of zone boundary stations having the heaviest demand for car parking, as some people drive to zone 1 to avoid the higher fare. 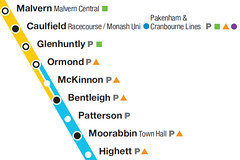 (This is a very visible problem. But is it a widespread one? Not sure. By my quick count there are about 6500 parking spaces at the stations on the zone 1 boundary or a little further along — even if you add people parking in nearby streets, it’s a tiny proportion of the roughly half-a-million people using the train system each day.)

Myki: It would remove touch-off from trains and buses. This would have particular benefits at suburban railway stations in evening peak. (It’s already not needed on trams for almost all trips, as zone 1 applies.)

Price rises: The biggest issue is that it benefits some passengers but badly disadvantages others. Making all fares the zone 1 fare would mean that local zone 2-only trips would jump in price by about 45 per cent — for instance a daily fare would go from $4.84 to $7.00.

Lost revenue: Assuming there are more two-zone passengers than zone 2-only, there would be a big hit on fare revenue. How much? I don’t know; but I did work out using old railway station boarding figures that there are around 211,000 boardings in zone 2 each weekday. If for the sake of a rough estimate that we assume 60% of those travel to zone 1, that half are concessions, and that many are on Myki Money (none of these assumptions are necessarily true) then you’re looking at lost revenue of over $100 million a year. That’s a lot of money.

Fare rise pressure: If experience from elsewhere is anything to go by, a single zone might well result in upward pressure for the flat fare to increase. Which big Australian city has the highest fares for trips up to 15 km? When a comparison was last done, it was Adelaide — which is also the only big Australian city with a single zone/flat fare system. (I had a quick look at latest fares — Adelaide is still highest for cash fares: $4.90, though for smartcard fares, Brisbane beats it by a small margin).

It wouldn’t make Myki a one-zone system: People forget: Myki isn’t just Melbourne. You might get rid of touch-off in Melbourne (which would in turn lead to confusion because of the way default fares are processed, unless more was spent on revising the software)… but Myki is about to cover the V/Line commuter belt as well, out to Geelong, Ballarat, Bendigo, Seymour, and the Latrobe Valley, as well as the local town bus services along the way. There will always need to be zones.

My view is it’s not worth it.

It does sting badly to have to pay for two zones when you’re only 1-2 stations out from the boundary — I know this pain — when at uni, I used to pay a two-zone fare to travel between Moorabbin and Caulfield.

But it hasn’t stopped, for instance, the new Williams Landing station (2 stops/2km into zone 2) from being used. Apparently yesterday, the first weekday of operation, the big 500-space car park was already half full.

There are definitely problems with the high price jump as you cross the zone boundary, but making one Melbourne zone is not the way to fix it.

In fact, having more (but cheaper) zones, not less, might be a solution. That could mean a more gradual step-up. In this respect it’s a shame zone 3 was removed in 2007… a better idea might have been an across-the-board fare cut (which is what happened on V/Line that same year). The issues with this are that more zones is probably politically unpalatable (because it sounds retrograde, and might be difficult to explain the benefits) and it might mean the current issue of driving to zone boundaries actually spreads to more locations.

Considering a parking fee at zone 1 stations (particularly those near the boundary) is worth looking at to help reduce the instances of people driving further to get cheaper fares — but is also somewhat politically unpalatable.

There is an argument for making buses zone-free, similar to trams. I’ll explore that in a later blog post.

As ever, I’d be interested to hear what others think about this issue.

Update: In March 2014, the Napthine government announced they would abolish two-zone trips in Melbourne. Zone 2 will remain for zone 2-only trips at the cheaper rate, but all other trips will be at the zone 1-only rate.

24 thoughts on “Remove zone 2? Not necessarily a good idea”