“We spoke to Infrastructure Australia and their advice was that the most pressing road priority in Melbourne was the east-west link,” Mr Abbott told reporters in Frankston on Thursday.

Perhaps the Federal Coalition has no history of funding urban rail, but the Commonwealth most certainly does. 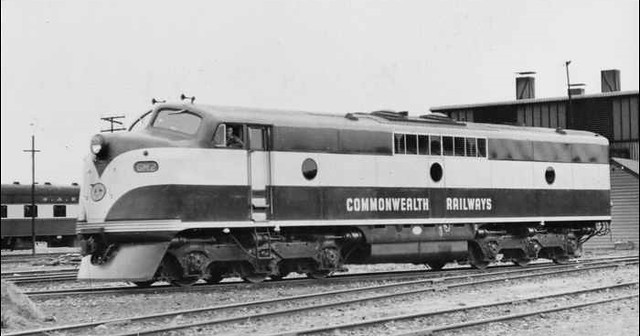 Moreton Bay rail link (Qld) — $742m from the Commonwealth, $300m plus land from the Queensland government, and $105m from the local council.

Regional Rail Link (Vic) — which despite its name, is entirely within Melbourne, and will serve two new suburban stations at Tarneit and Wyndham Vale. $3.225 billion from the Commonwealth government, and about a billion from the state.

Perth City Link — is a sinking of one rail line in inner-city Perth, with $236 million of Commonwealth funding for rail infrastructure.

In recent times, other projects have gained Commonwealth funding. In Victoria alone there’s been $95 million from the Feds for inner-Melbourne rail freight upgrades, $30 million for level crossing upgrades (some in regional areas, some metropolitan), and $40 million for planning work for the Metro rail tunnel… with rumours today that the tunnel will get more funding, presumably if Federal Labor is re-elected.

Going back a few years, Melbourne’s Cranbourne line was upgraded and electrified in the 90s with money from the Commonwealth’s Building Better Cities scheme.

These are just the projects I found during a quick search around on Google last night. No doubt there are others.

Despite what Abbott thinks, the real distinction (which is more relevant to PT than to roads) is that the Commonwealth gives once-off funding. What they don’t generally do is recurrent funding — required to actually run public transport, but also required to maintain roads — in fact people often forget that the rough cost of roads maintenance is about 1% of the construction cost per year.

It might be convention for conservatives not to fund urban rail, but there’s no reason they can’t. It’s entirely up to them.

I think all but the most car-centric person would see that in modern growing cities, you can’t move everybody around by road — that rail, particularly in inner-city areas, is much more efficient.

Unfortunately unlike some of his Liberal colleagues (and unlike conservatives in such places as the UK), Tony Abbott does appear to be the most car-centric person.

In the 21st century, with car use waning and urban public transport booming, this is a regressive stance, and should make people think twice about voting for the Coalition in September.

14 replies on “Abbott reckons the Commonwealth doesn’t fund railways… Of course they do. Here are some examples.”

The Gold Coast rail line to Helensvale in 1995/96 was also a building better cities project, funded by the feds.
Technicaly its an interurban line rather than urban, but then again the Gold Coast and Brisbane are the one big city anyway..

Daniel, it really isn’t the case that the Federal government can fund whatever they like. They are constrained by the constitution and state relationships on several levels.

What they can fund, without issue are:
– Roads and railways designated as part of the National Network. Most of the level crossings in the program mentioned were along these roads.
– Local government programs – such as Roads to Recovery – where the money bypasses the state governments.

When the Federal government funds a state directly, it is worked through a Special Purpose Payment. But here is the kicker: the Commonwealth Grants Commission assesses SPPs as a source of revenue for each state, and then uses that assessment to reduce their proportion of the GST distribution. In the short term the money arrives, but the rolling average removes it from the distribution over the next five years. Which is why every budget for the past three years the Baillieu government complained about the CGC distribution. Regional Rail punched a massive hole in their forward projections.

The upshot of all that is that the oft-pronounced “need” for Federal government funding is rubbish. State governments have sufficient means to raise revenue*, and are merely abrogating responsibility for their own funding by making infrastructure projects dependent on Federal funds. And frankly, the last thing we should want is Federal interference in urban infrastructure. There is absolutely no way Western Australia would have built up their rail infrastructure if they’d had to do so via the Howard government, for example. Federal funding promotes grand-standing in Canberra and irresponsibility in the State capitals. A case where nothing is actually better than what is on offer.

* To the extent they don’t it is because tax competition means they prefer federal taxation and funding to maintain parity. But SPPs are a horribly inefficient way of overcoming that problem.

This is certainly one of Abbott’s more bizarre statements.

I notice that nobody has proposed building a railway to Abbott’s electorate, for quite some time now.

Honestly, these comments are just proof that Tony Abbot does not have the Prime Minister skills at all!! The East West road link is just a tunnel to making Melbourne into Los Angeles. This road has no benefits at all!!

London is getting a new 118km railway for £16 billion. Building a motorway instead of that would be insanely expensive and become full within in 10 years – just like CityLink did within 10 years of opening.

Yet, here in Australia, governments want to continue building road tunnels instead of railways.

The Whitlam Government set up funding for urban PT. That funding was continued under Fraser until about 1979 when the grants to the states were increased by the amount previously taken up by the Commonwealth PT spend.

The Fraser PT funding kill off caused the Victorian Government to cancel the Doncaster line, for which excavation had already started (it got filled back in).

Meanwhile in WA, Colin Barnett’s liberal government won by a landslide, part of the extreme weight of such due to their “we’re going to add rail too, and do it better and cheaper than the opposition would” style campaign, amongst other tactics. It turns out the “fully costed” budget (Colin was quite vocal about this – I had to put up with this crap for weeks no matter where I turned) for this thing included heavy federal funding, and apparently Abbot says that’s not likely to happen when/if he gets into power later in the year..

Oh yes, he was also promising to “stand up to the federal government” over that little GST issue commented earlier. Good luck with that.

Ah, so that’s why the LIbs have been averse to the NBN the past and current 3 elections too. They don’t feel comfortable doing anything they haven’t done before.