Those who have been paying attention might have noticed that the episode synopses for Shaun Micallef’s Mad As Hell (seen for instance in the Electronic Programme Guide on most TVs) have been getting weirder and weirder.

Courtesy of the ABC TV web site, here’s a summary of them this year so far (including the next couple of weeks’): 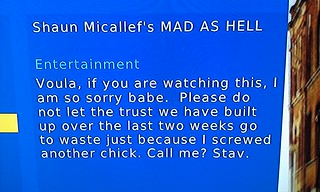 Shaun Micallef is BACK and he’s MADDER than HELL. We really should have changed the name but it’d cost us a FORTUNE in letterheads and we’d have to change the show GRAPHICS which also runs into MONEY. Anyway, he’s back FOR A SECOND SERIES – that’s the POINT. And THIS TIME he KNOWS what he’s DOING (slightly).

Nominated for an AACTA and HAILED by Fairfax Media as the ’20th WORST show ON Australian TELEVISION.

When Shaun’s racist neighbour Mr. Grealy invites him over to eat some Japanese, Shaun doesn’t know how to take it.

When Francis asks Shaun if he can change a word in one of the scripts, Shaun kills him.

A convention for people named ‘Peter’ goes horribly wrong when Shaun is mistakenly invited. And hydrochloric acid starts streaming from the sprinkler system.

Mongoose. Winter is closing in. It is not safe. Go into hibernation. Further instructions to follow. Cobra.

Yo! Join Kook and the Bambino tomorrow morning at 7am on 103.6 Smash FM for your chance to win $10 playing Puzzling Noise.

Voula, if you are watching this, I am so sorry babe. Please do not let the trust we have built up over the last two weeks go to waste just because I screwed another chick. Call me? Stav.

There’s a vampire loose in Las Vegas. No one believes or wants to believe it’s true. The police can’t stop him, people are dying, no one’s safe. How do you kill what’s already dead?

It’s a pity the show isn’t as funny as synopses.

Love it (and the show!). I still remember the first time I listened to the commentaries on The Micallef Pogramme box set and there is one 30 minute episode where the entire commentary is a dog barking – lol!

The EPG episode synopses were good last year too. Cathy and I both look forward to finding out what’s planned for the next episode, often disappointed that it bares no resemblance to what actually happens. But then, they generally don’t with any other TV show, or they have the same tired trite elevator pitch week-after-week. At least the ABC can be bothered having meaningful EPG information.