Leader Newspapers is reporting that Myki topups will be allowed on buses from next month. A maximum of $20 will apply.

Well, that’s about time. This is good news for passengers. 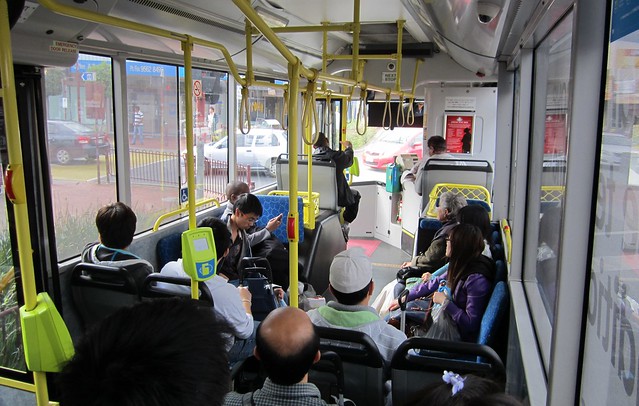 Firstly, it means the Myki consoles will be activated, with Metcard equipment removed. The coexistence of the two systems has caused a lot of glitches, particularly crashed readers unable to be easily restarted, and incorrect zone detection.

Secondly, it resolves issues for middle and outer-suburban users with topups. Bus drivers do carry preloaded Myki cards for sale, but with no short-term tickets, and many suburbs having few retail outlets, and online topups being quite slow at times (because transaction has to be loaded onto bus readers for collection with the card), this is an important option for many, particularly those who don’t use trains, and those who don’t want to use Auto Topup (which does avoid these issues).

There are two issues that have been highlighted with topups on buses.

First: that it’ll slow down buses. That one is easy to solve: don’t give change. This will cut the time taken for each transaction, but it’ll also encourage users to load up more than a trip and/or day’s worth of Myki Money in each transaction.

After all, we’re stuck with no single tickets for now — we might as well make the most of it to speed up bus services, which unlike the other modes have suffered greatly in the past from delays caused by on-board sales.

What should be permitted though is to split the topup across multiple cards, so that for instance a family boarding can give the driver a $20 note and have $10 of that loaded onto the parent’s card, and $5 onto each of the two kids’ cards.

Secondly, some bus drivers have grumbled about possible security issues from carrying large amounts of cash.

I would think it wouldn’t be a larger amount of cash than previously under Metcard, but it is likely to be higher denominations — people will topup less often than they bought tickets, but are likely to chuck $20 at a time onto their card.

The security risk is easily solved by using the method that has been used by many North American bus systems for decades: give no change; all cash goes into a locked box which can only be opened at the depot.

So, I think both issues are easily solved — but it’s not yet clear if they have been addressed by PTV for the April rollout.

It’s not clear when trams will have their Metcard equipment removed and headless mode will be fixed… I don’t think I’ve seen a single tram which doesn’t still have a Metcard machine fitted.

When it eventually happens, it won’t mean topups are available, but at least other issues should be resolved.

6 replies on “#Myki topups coming soon to buses (but will they avoid the issues of slow transactions and security?)”

As an alternative, why couldn’t there be a myki topup machine on the bus that passengers can use? This could be down the back a bit so not to slow down incoming commuters. Or would this increase fare evasion?

Great news. I can’t say how many times I had to run around looking for somewhere to top up before getting a bus.

You could encourage people to top-up with the bus driver at times when it doesn’t hold up the bus.

For example, if the bus is a feeder bus to a station, pay the driver after it arrives at the station and all the other people got off. This might cut into the driver’s ciggie time but it doesn’t hold up 50 other people for a minute.

did you know that there’s nowhere at Southland to top up your Myki?

@Jen, I know the newsagent at Southland recently closed… I assume that had been a Myki retail outlet. Pretty silly that there’s now none!