Noted at Flinders Street Station the other week, on one of those automatic rotating advertisement things: competing ads for Myki.

“Even the shortest queue can be avoided with Myki auto topup” 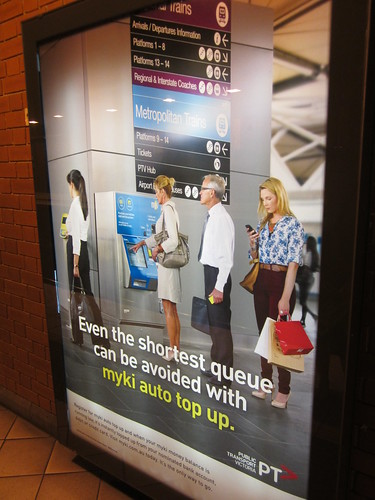 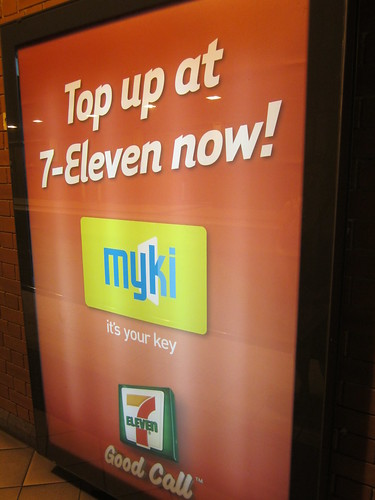 (The third ad in the sequence was not Myki-related… after that it flipped back and repeated the two above.)

Interestingly, some 7-Eleven adverts, such as this one in MX, have emphasised that credit appears on your card straight away, unlike with online top-up. 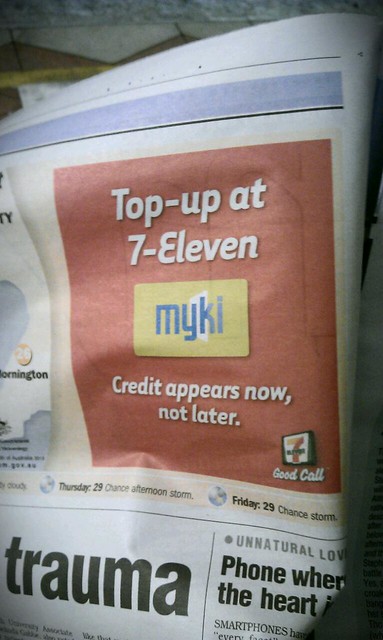 It’ll be interesting to see if these types of adverts encourage people to use off-system top-ups such as at 7-Eleven, and/or auto-topup (which works quite well for Myki Money users, and is literally a “set and forget” system — once set up, this too is instant).

I still won’t trust Auto topup – if there is a stuff up, everyone would be blaming someone else (eg the bank, the customer, myki, PTV, state govt, IT provider, TTA, the cleaning lady…)
And myki payment machines still give contradictory and confusing on-screen instructions when paying by card.
I use 7-eleven and have never had a problem.
myki is actually a great system and miles better than the old paper card. Dare I say, “well done State govt”?

7-Eleven is my preferred method of top-up also. The Myki machines are still take far too long to process any transaction involving a debit or credit card.

It does seem short-sighted that contactless PayWave/PayPass weren’t included as payment options on the Myki machines. Given that most credit and debit cards have this option these days, surely a contactless-only topup machine would make sense at some point – particularly on trams. They wouldn’t take up much space, and no moving parts means limited maintenance required. Transactions would be limited to <$100 but I imagine most top-ups are below that anyway. Any takers?

I’ve been using auto-topup for a couple of years now on three different cards and no problems with the topups themselves. They occur when they should and I get an email when it the topup has been triggered.

The Myki web site has an issue with the handling of cards and topups. If you want or need to change any of the details of the auto-topup, then it means making a topup at the same time, even if its not necessary.

For particular individuals, it probably also depends a lot upon whether there actually is a 7-11 in the neighbourhood or on their usual route.