Of people with a disability, Mobility aids used by about 15% of them. 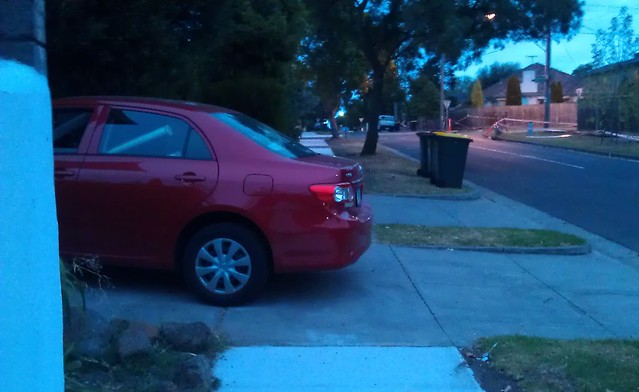 So about 600,000 people nationwide use mobility aids of some kind: walking sticks, walking frames, wheelchairs.

And let’s ignore for a moment that some of the 600,000 people who use mobility aids are aged under 5, or supervising those under 5.

What we get is that perhaps around three and a half million people (about 1 in 6) in Australia have some challenges with simply walking down the street.

They need two things to help get around their neighbourhood.

Firstly they need adequate footpaths provided by councils and road authorities. This means both sides of the street, built with proper drainage, and designed for minimising journey distances, rather than taking long detours to get places. Adequate road crossing places also need to be provided — responsive traffic lights, pedestrian refuges (islands) and so on.

And secondly, they need people to not block the footpaths with their motor vehicles. To do so is the ultimate in arrogance and thoughtlessness for three and a half million of your fellow citizens. Yet I see it continually when walking. It’s high time there was a crackdown on it.

Personally, in the last few months I’ve left several polite but firm notes around my neighbourhood on repeat offending vehicles — they seem to work, and it’s probably easier than trying to convince the council or police to do something about it (though pleasingly, it does sometimes happen).

10 replies on “1 in 6 have challenges just getting down the street. Don’t block the footpath.”

It is a terrible shame when cars parked as such accidentally get scratched by thoughtless pedestrians carelessly carrying their keys in their hands. Pedestrians need to be more careful when brushing past illegally parked cars.

This really annoys me too – as a walker I see examples like this and worse all the time.

Another element which adds to the problem is the haphazard way wheelie bins end up after the garbage has been collected (and sometimes even before). The combination of bins and badly parked cars is deadly.

I’m just glad I’ve still got my agility and my eyesight.

Andrew: I’m sure I don’t know what you’re talking about.

In my suburb (Brunswick) cars aren’t as much an issue as various other things blocking footpaths, such as wheelie bins and temporary fencing around telephone pit lids (a result of NBN construction). I’m able bodied and there’ve been times when I’ve had to walk down onto the road because the obstructions were so great. I can’t imagine what it would be like for someone in a wheelchair – they would probably have to turn around, and find an alternate route (NBN construction tends to go by street, so even if you were to cross the road you’d likely encounter another obstacle there).

Yes, motorists blocking footpaths (or parking on nature strips) is a real safety issue.
To be fair, cyclists on footpaths and dog owners with woofie off-leash, are also hazards. Grrrrr!

Thanks for this – I recently sent pics taken of 20 vehicles across foot paths in my local area to the local Council. Footpaths here are few in number, nature strips are either steep banks or very uneven. I sent the pics and my suggestion of an education program of this illegal practice. Also mentioned parking in driveways outside the property boundary and on nature strips, as well as oft occurrence of b-doubles and other long vehicles parking for longer than specified in our rural residential area. The Council said they may do a letter drop, the local laws person would drive around (but no, not after hours and weekends (when this behaviour mostly occurs) – but nothing done to date after a few weeks.

In addition to the requirements you’ve suggested Daniel, I’d also suggest councils need to think clearly about what sorts of trees they’re planting in nature strips. Not only does tree type have a big affect on hay fever sufferers (of which Melbourne especially has a lot!) but the root structures of many trees makes for uneven and cracked footpaths in many places. Unfortunately these problems don’t become apparent until the trees are well and truly mature, at which point taking them out isn’t really an option. These root structures can also affect nearby buildings, fences, etc.

Westgarth Street in Northcote/Fairfield is a prime example of this, the footpath is in terrible condition despite fairly regular maintenance by council.

I’ve really noticed this since having a baby and going in a daily walk. Without fail, every day I have to detour because of a thoughtless car owner. Sometimes, I’ve had to walk out on a busy road to get around the car. On a couple of occasions I may have “accidentally” nudged the car with the pram when trying to fit through (repeat offenders beware!!).

And how about the drivers who park so close to another car that it precludes being able to open the door wide enough to get a child in their restraint? On one occasion, I had to leave my baby in her pram while I reversed the car in a car park because the arrogant driver next to me had left such little space for me to get my baby in her seat. He copped quite a nasty note that day!!

Another gripe I have is with people who insist on mowing their nature strip even as I walk past with a pram. Would it be too much too ask for you to pause for the few seconds as I pass so I don’t have to worry about grass, stones etc flying in my face and my baby’s??

I thought I was the only one. I see this all the time. You certainly notice it when you become a parent, trying to get a stroller/pram down the street.

If your note doesn’t work, letting down the tyres might discourage repeat offenders. Not that I’d ever have done such a thing.