Say what you like about VicRoads, they know how to do forward planning.

For example, there’s a stretch of Ballarat Road in Footscray, just west of where the dual carriageway ends, where this is a common sight: 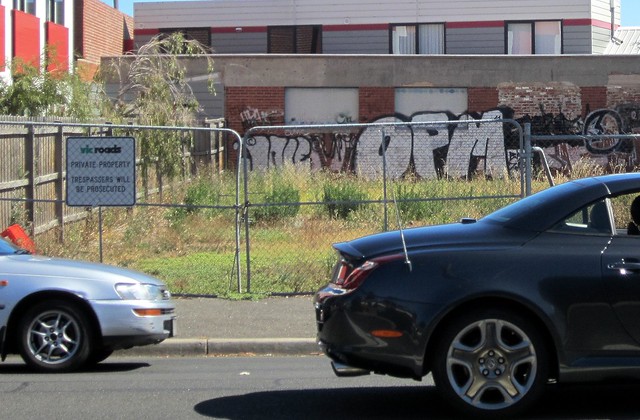 A look at Google’s aerial view reveals quite a few empty properies along the street. 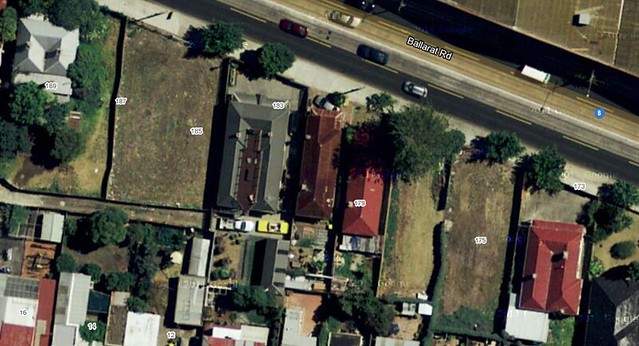 In a classic case of salami tactics, VicRoads has been slowly buying up the properties, perhaps over decades, with a view to eventual widening and duplication of the road.

Looking at some Planning Property Reports for one of the properties, there is indeed a Public Acquisition Overlay for the sections of those properties that face the road. 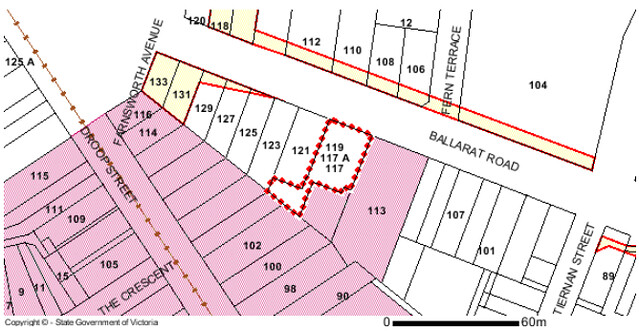 So, when and if road widening ever happens, then between Gordon and Droop Streets, the old Kinnears rope factory won’t be touched, but a bunch of houses and shops will lose part of their land (and thus face demolition or modification). Further towards Victoria University, it won’t touch the newish apartment block on the southern side, but will take part of the bowling club on the northern side.

West of Gordon Street, it’d be the northern side of the road that gets wiped-out — though it appears that (for now) a heritage overlay protects the rather glorious avenue of trees between Summerhill Road and the next section of dual carriageway.

All this is not to say VicRoads has any immediate plans to widen the road. It could still be decades off. But they have the overlay, and they have some of the land in their possession already. It’s a similar situation in various spots around Melbourne — one well-known one is Punt Road in South Yarra/Prahran, where overlays have been in place for more than half a century. (It’s a reminder to always check for overlays when thinking about buying a property.)

VicRoads owns about 2500 homes across the state. They have been bought over the past five decades for the sole purpose of future road use.

Such road expension projects have taken place before; the widening of the Nepean Highway in Brighton took out scores of houses. St Kilda Road between the junction and Carlisle Street was once High Street, and the old shopfronts still seen on the eastern side once were on the western side as well — that widening removed the historic Junction Hotel. And close to where the above example, Geelong Road was widened in the 1960s, all but obliterating an Avenue of Honour that had been there.

The VicRoads way is symptomatic of the forward planning that goes on — the so-called “bottom drawer” they can whip road plans out of whenever funding is available for something. And while this road expansion never seems to solve traffic congestion (thanks to induced traffic), they seem very efficient at getting it built.

It’s arguable that having a clear plan via an overlay, and slowly buying up the properties — even if empty land is a waste and looks horrible — is better than turning up out of the blue and announcing to people that their homes are going to be bought and demolished.

In contrast to quiet buying up of land for road widening in the distant future, down the other end of Footscray, the RRL project had to acquire and demolish a number of houses and industrial property — and managed to botch the notification to affected people.

And in Sunshine, RRL is shaving away a section of the HV Mackay gardens. The of course there’s the new Footscray station bridge demolition.

Apparently nobody envisaged that the main western railway corridor would ever need to be widened, so the land wasn’t reserved. One can only hope that over time, future planning will improve.

What’s also concerning is there seems to be no budget or will in say PTV or it’s predecessors for the same type of thing. For instance, the route 8 terminus at Glenferrie rd is dangerous and difficult for all users (especially those disembarking from trams!) but despite it being a known problem area, Yarra trams advises that no suitable alternative has been found acceptable to all stakeholders (which will include VicRoads, who won’t want to see Toorak Rd capacity toward the M1 freeway reduced).
Yet, by the judicious acquisition of a couple of the corner properties, the road could be slewed around a centre island platform, or similar… The same sort of thing exists in a bunch of locations, but where’s the bottom drawer options?

Something that could be done before road widening is banning parking in the left lane, except, perhaps, in shopping strips. In many situations parking can be located in a side street or purpose built facility near by. It is rather odd that the road rules allow a standing vehicle to occupy a lane, delaying other drivers and trams.

I actually turning up out of the blue is more honest. Buying a property, and then 20 years later saying “we don’t need your approval, look” seems a bit less desirable. And in the meantime, they just leave rotting houses, or empty blocks. One would have to wonder how much that land is worth.

But yes, the contrast with rail infrastructure is educational. VicRoads by itself is a road-building lobby; the “Linking Melbourne” authority is another one (despite being referred to an integrated transport authority). It’s not a great way to have things structured.

Almost no other infrastructure is treated the same way. VicRoads is really still operating to the plans established in the 1960s; they’re essentially dictating policy, and that policy doesn’t involve trains or trams or much cycling.

They haven’t realised that you simply can’t build a modern large city, and have cars be a large part of it.

@Dave, Yarra Trams have a proposal to run route 8 north to Kooyong Station to terminate there. The only danger with that plan is it might rule out future eastwards extension.

@Gus, in this case, parking is already banned from this section of Ballarat Road (though I think further west it might be permitted outside peak times).

In part of Ballarat Road, the trams would also benefit from their own lane for the brief time they use the road, though I don’t know if they get overly delayed by traffic at present. The eastbound tram stop just before turning into Droop Street does have problems with cars running through though.

@Simon, yeah I can see both sides here. Note that the overlay only affects a small portion of each property. I’m surprised they can’t subdivide and sell off the sections that they don’t need, so they can be used for something more productive.

On the subdivision thing, I guess it’s probably more trouble than it’s worth — they don’t really know where the boundaries will be, so driveways etc could be a problem. And it would be embarrassing if their plans changed.

I do wonder with things like RRL whether they end up making a profit when they end up selling the land they don’t need (after the infrastructure is built). I assume, at least, that in Footscray there’ll end up being apartments or something there. Hopefully with double glazing.

Makes me feel they should earmark a block of land for Doncaster Railway Station to be built, because apartment blocks have gone up opposite the Westfield Shopping Mall and only 1 decent spot remains for the station to be built.

The OfficeWorks shop + carpark should be ear-marked for a station and not allow another apartment tower to come up there, otherwise, the station would have to be deep underground at massive expense and would take passengers longer to exit/enter.

Very interesting article, Daniel! I had no idea that VicRoads took this approach.

With RRL in Sunshine, they may not have needed to acquire any part of the HV McKay Gardens as Victrack probably owned enough land to put in the extra track. However, Brimbank Council negotiated that RRL had to do two grade separations on Anderson Rd and it’s one of these that RRL said would mean acquiring 176m2 from the Gardens. Some heavy lobbying from the community resulted in changes that mean only 5m2 is being reclaimed.

Of course VicRoads have an advantage over the public transport bodies – they have nearly 100 years of continuous growth in the demand for road capacity. It’s not surprising that they have well established forward plans, and could acquire land bit by bit.

With public transport, there was a long term decline in demand from the ’50s to the ’70s. Not surprisingly there was consequently no equivalent long term plans to improve capacity – the government wouldn’t have funded it, and the organisations were focused on managing the decline. Even when growth resumed, there was plenty of underutilized capacity to use up (it’s only in recent years that we’ve gone to 6 car trains). It’s only recently, when public transport demand spiked, and with the excess capacity largely used up, that capacity improvement has become a major issue. Suddenly we are getting the RRL and the Metro.

I wonder if it would be possible to create small parks on some of those empty blocks of land for the benefit of the remaining homeowners. It would be more attractive and useful than derelict blocks of locked up space. Parks, even with trees, would not be hard to get back once the road was being built. The local council could be made responsible for upkeep with perhaps the costs being met by VicRoads. On the other hand, I don’t see much incentive for VicRoads to do this other than being a nice organization.

I remember similar goings on in Sydney when construction (finally) started on the F2 Motorway/Tollway. There was a lot of hue and cry about people having to move and of a so-called “nature reserve” being destroyed. But, according to a friend of mine back in the early ’80’s, who worked for the then Department of Main Roads, the land had been set aside for a freeway-type road for 40-odd years, so there really were no grounds for complaint – the “nature reserve” was actually original bushland, untouched by any form of development. Mind you, I’m not sure that whatever department is responsible for additions to Sydney’s rail network has been so good at forward planning. I’ll be fascinated to hear what happens with the proposed rail link between Chatswood and Parramatta, which goes through (or under or over) some fairly densely populated areas.

That is correct – the M2 is the built section of what was originally intended to be the Lane Cove Expressway. The inner sections were ultimately cancelled, but were intended to join into the proposed M4 inner section which is being resurrected on and off again as a tunnelled route after itself also being abandoned. The Gladesville Bridge and the freeway standard approaches to it are the only inner part of the Lane Cove Expressway plan to have seen the light of day .