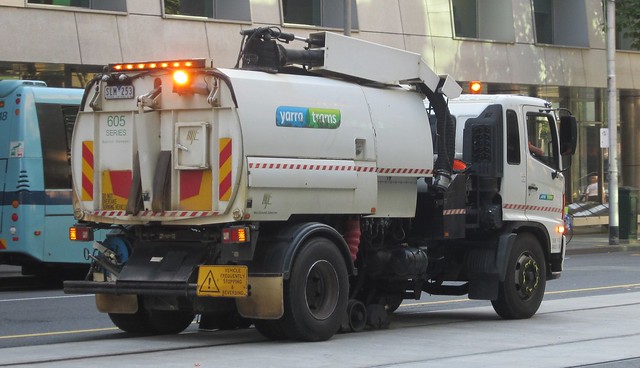 I recall a Yarra Trams person telling me that while they love Melbourne’s leafy streets, some of our local trees drop the wrong leaves (I’m paraphrasing mind you, these are not her words), which does cause slippery rails, particularly in autumn — which is why, particularly at this time of year, you’ll see this beastie out and about, cleaning them up.

Similar perhaps to a conventional street-sweeper, it’s got special wheels that go into the groove of the track to clear it out.

It moves slower than the trams — on the morning I snapped it, it manoeuvred itself onto the opposite track when a tram came along, then moved back and followed it onward. 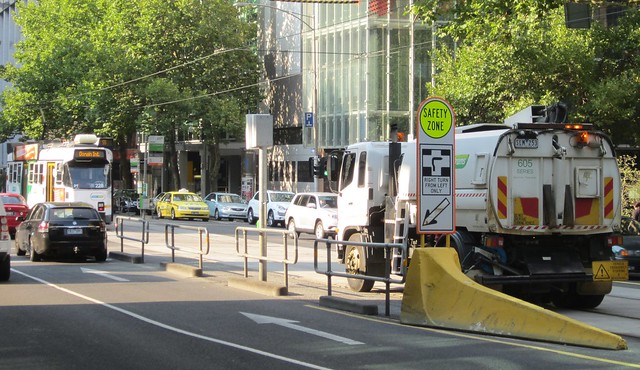 Driving on wet leaves can be just as slippery and dangerous as driving on ice. I have gone into a bad skid on both and the loss of control is the same. Driving on freshly fallen snow is easier and not all that slippery as long as one does not accelerate or brake too suddenly. I’m not surprised that wet leaves would cause some problems for trams as even a little rain causes them to skid.

Daniel – not sure if you heard about the Cleveland Train incident – where the train failed to stop at the end of the line and plowed into the train station?

Luckily only minor injuries but there is a suggestion that leaves on the track from recent heavy rain (and/or electrical problems) may have been part of the problem….

The investigation is ongoing….

See some of the details here: