Yesterday’s closure of the Monash Freeway outbound at Warrigal Road due to an accident shows one reason why the “second river crossing“/”backup for the Westgate” idea wouldn’t work.

The Monash Freeway is 4 lanes for most of its length.

So is Dandenong Road (aka the Princes Highway), which runs more-or-less parallel to it, and was recommended as an alternate route:

Here’s how Dandenong Road and other nearby roads coped: 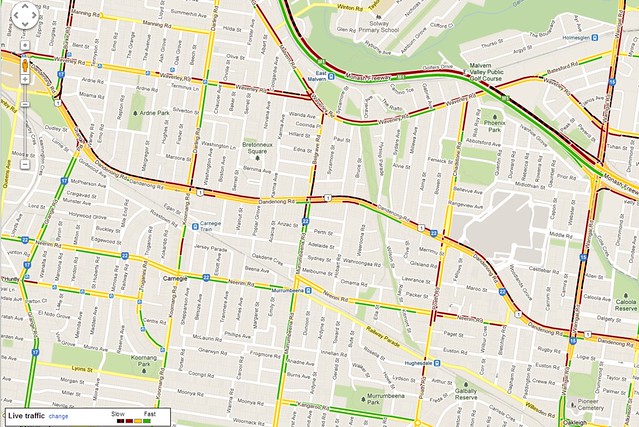 The backup route idea only works if you keep the backup closed until the primary route is shut.

Otherwise, those routes have their own traffic. Dandenong Road does; thus it struggled last night with the extra load.

Leaving aside for the moment that the proposal is too far north to be an alternative route for most, so too an east-west “Westgate alternative” would have its own traffic.

Mind you, it would still most likely not be economically viable. The construction cost, especially for tunnels, seems to have made toll roads so impossibly expensive they can’t make their money back. In the past few years, no less than four Australian toll road operators have gone bust — those running Brisbane’s Clem7, Sydney’s Lane Cove tunnel, Sydney’s Cross-City tunnel, and this week Brisbane Airport Link.

The only way the east-west motorway would get built would be to be propped-up by taxpayers (like the just-opened PeninsulaLink)… sucking up to $10 billion or more out of the budget, and away from upgrades to more sustainable modes including public transport.

A far better, cheaper, more efficient, more sustainable “backup for the Westgate” is to provide more frequent, more reliable public transport links — including the trunk high-capacity heavy rail network, but also including high-frequency feeder and local buses with traffic priority — so that as many people as possible have a genuine time-competitive choice and can get out of their cars and be off the roads altogether.

For those who don’t necessarily need to be in cars, public transport can easily move more people than motorways — it only takes about 7-8 trains per hour to shift the equivalent number of people to a four-lane road. With numerous other roads to/from the west, which can take the traffic that has to be in vehicles, there’s simply no need for an economically shaky multi-billion dollar east-west motorway tunnel through Carlton.

Ultimately, the best way of fighting traffic is to get people off the roads.

Yep, the first item on Nine News Melbourne last night was “traffic chaos” on the Monash.
You are absolutely right. Get people off the roads. Spend the money on creating viable public transport alternatives.

Sydney has a second harbour crossing/backup to the harbour bridge.

It didn’t prevent major delays when one of them closed yesterday:
http://smh.drive.com.au/roads-and-traffic/major-traffic-delays-as-harbour-tunnel-reopens-after-truck-fire-20130220-2erbj.html

What is has done since first opening is encourage travel patterns that rely on having both crossings open.

The real problem with the Monash/Westgate is it functions as both bypass and a radial route in the most populated part of Melbourne. If you want to go from Frankston to Werribee for example you are also going through the busiest employment centre outside the city being Monash and then through the CBD itself.
What Melbourne really needs is a complete orbital network including a NE link and viaduct over the bay (like some of the large US causeways). Integrating this with a BRT solution or similar would give Melbourne a decent orbital public transport and freeway system to match the extensive radial systems we already have.

Dandenong Road between Queens Way and Malvern was solid with creeping cars, somewhat later than the time that the incident was cleared. I expect there were some very smug tram travellers surveying the chaos as they zoomed along the Dandenong Road reservation.

As you are well aware, it only takes one “person hit by train” just before peak hour to have similar delays on the railway network.
Commuters will use the most reliable transport which gets them to their destination at the expected time….
I noticed that you tweeted there were seats on the train at Toorak today during the inbound peak. My guess is that after 40+ minute delays to board a train the previous day, people were back driving to work.
Maybe we need backup tracks & roads?

How is “more buses” a backup for congestion caused by ocasional traffic accidents ?
Buses get held up in the traffic jam too. And you are even more trapped on a bus, with a car you can at least try to turn around and go home, or go somewhere completely different.

I was going to say that train line disruptions lead to chaos too (and worse than the Monash issue) but I’ve been beaten too it – and from anything to heat, storms, a delayed sick passenger and copper theft cause it too. On the Dandenong corridor disrupted services often terminate at the rebuilt at Westall – a station in and industrial area with near-zero passenger amenity in terms of finding an alternative bus out or getting picked up from the narrow entrance off Westall Road.

The problem is that the train network and any expansion in Melbourne just comprises more/longer radial fingers from the CBD without being able to conveniently use another line as a backup without a lengthy travel time. The cross connections, admittedly better than they were, probably still don’t really compete with driving in the outer suburbs and would be used primarily as local feeds for stations – again for that trunk radial travel.

@Alasdair and @Andrew S, you’re absolutely right that train outages cause problems, but it still comes down to mode efficiency. A crowd of 20,000 displaced is easier to move (and has less impact on the road network) in 200 shuttle bus services than individually in their cars.

Which is not to say that Melbourne doesn’t need to improve drastically in how they handle train disruptions…hmm, might be a subject for another post.

You’re example is dealing with dandenong road which is stop start traffic as is, with many intersections and traffic lights. An alternative link to the West would not be this model. Obviously a second crossing would also take traffic off the Westgate as well as it would be closer for many other people travelling from the West and a better option for them. Agreed, invest in rail, but it shouldn’t be an either-or scenario. We need both. Just moronic to only have one major road crossing free of intersections in a city as large as Melbourne’s, and that’s not a Moses-like endorsement of roads only.

It is a case of either-or. We do not live in a magical fairy land where the government has a limitless infrastructure construction and operation budget.

Improving the roads often reduces PT patronage and improving the PT comparatively reduces the road usage. There also has to be the usage of roads and/or rail to justify the spending and if both are built then spending will be wasted as there is not an unlimited supply of passengers.

@Austin, there should be a ferry from Altona to Elwood for that sort of trip.

The argument that major roads act as ‘backups’ to each other was basically discredited today after the Sydney Harbour Tunnel was closed after a driver flipped his car, causing “traffic chaos”… “The accident sent Sydney traffic into gridlock”.(http://www.dailytelegraph.com.au/news/nsw/sydney-harbour-tunnel-closes-southbound-after-car-overturns/story-fni0cx12-1226943810860)
If alternate river/harbour crossings were truly capable of handling each others traffic, presumably such a closure would have been a minor inconvenience. What seems to happen instead is that the delays get propagated across most of the road network, rather than the second crossing acting as an alternate pathway/relief.
Notably, buses experienced major delays as well, but trains (in separate right of way) did not.