I finally got around to playing a bit of Cities In Motion.

The game is fun, but in some ways is really not much better than the older Traffic Giant… though it looks nicer, seems to have more underlying complexity, and has more scenarios.

From what I’ve seen, my main beefs would be:

Some of the underlying principles are unclear: for instance, as your network of routes builds up, does patronage grow as a result of good/useful connections, as in real life?

(The review on the Human Transit Blog makes a lot of good points as well.) 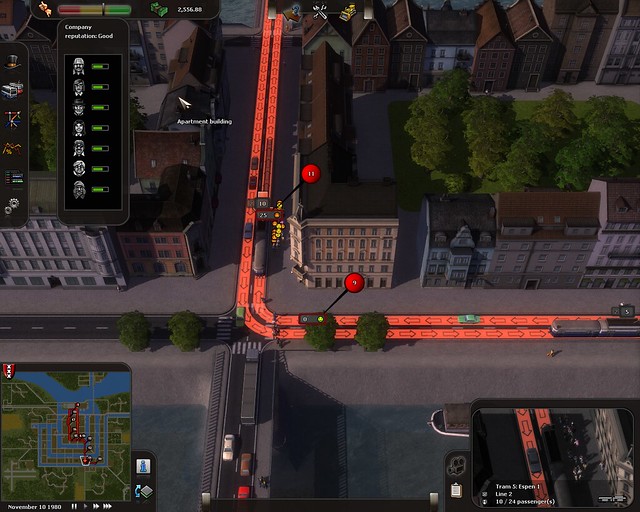 The bottom line is that it’s fun to play with, but — as with all the others I’ve looked at — not very realistic. And I’m wondering if we’ll ever see a public transport planning simulator (rather than just a “PT vehicles rolling around a city” simulator) that is realistic.

I’ll be interested to see how the Cities In Motion sequel, due out this year, goes… it looks like it will fix some of these problems. And the new SimCity is due out soon too.

There’s also an open source simulator called SimuTrans — I haven’t tried this; at first glance, like many open source programs, it looks complicated and seems to have little documentation.

6 replies on “Transport simulation games – will we ever see one that’s realistic?”

Transport Tycoon is great but it’s not really great for simulating passengers as they don’t have any set destinations, they will simply go to wherever you take them. It does have good scheduling and route management though, definitely more complex and micromanagerial than Cities in Motion, which can be frustrating when you want to build a route quickly. Transport Tycoon is geared towards freight which it does really really well. Passengers are effectively another form of freight

Maybe it was designed in Toronto or some other city with loop termination of trams.

Rob: Have you tried OpenTTD? It expands on the Transport Tycoon game and incldues a lot more features for towns, cities, people, goods and well… basically everything.

I reinstalled it the other night and somehow managed to miss most of last nigth because the game is so darn additctive :)

You can’t cut back on funding, you will regret this!

Tom: No, it is a German game. Their trams are not double-ended either, I believe.