William Street — too much space for cars?

Heading south along William Street in morning peak hour, fighting for space on the street, are pedestrians (predominantly coming out of Flagstaff station), trams, cyclists and motorists.

How many of each?

Tram route 55 gets a tram about every 4 minutes in peak hour. The May 2012 PTV load survey said that each tram carries an average of 78.6 people between 8am and 9am southbound (actually measured slightly north from this point), making about 1179 people per hour. 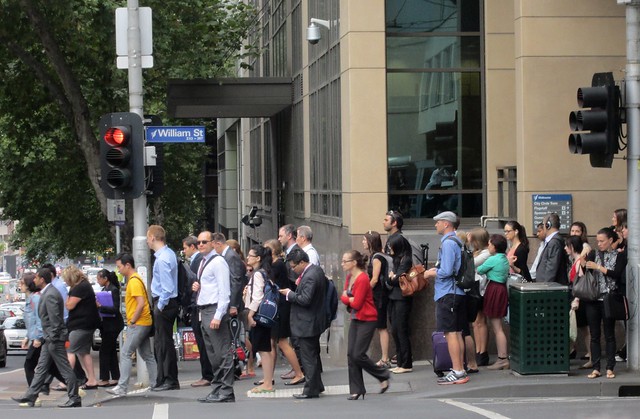 Pedestrians: Marcus Wong recently found some great City of Melbourne CBD pedestrian statistics. At its peak between 8am and 9am, about 5000 pedestrians head south from Flagstaff station.

Motorists: Vicroads network performance monitoring figures may or may not be of relevance to this specific street, but show that the arterial road average across Melbourne in AM peak is a bit under 800 people per hour. William Street southbound is only one lane, so let’s use that figure.

Cyclists? Dunno. I see quite a few heading up and down in peak, but the Bicycle Network “Super Tuesday” count doesn’t seem to publicly publish anything useful from the enormous amount of data they collect. Shame. In the absence of other figures, let me take a wild guess at 200 in the busiest hour.

The bike lanes aren’t properly configured. They fizzle-out in places, and around Little Bourke Street (southbound), cyclists often either have to squeeze between cars, or wait for them to shift. 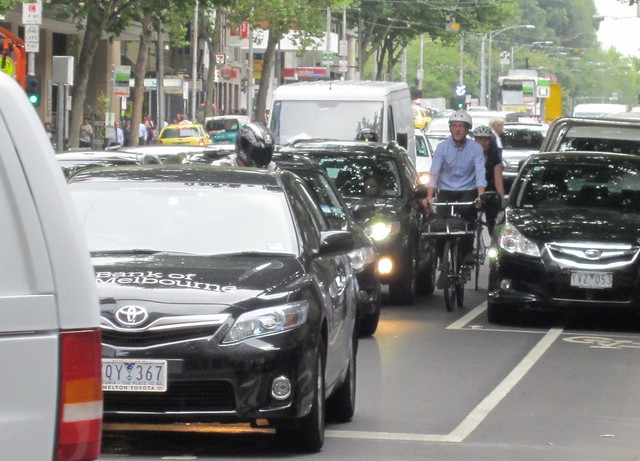 If you assume the footpaths are roughly the same width as each tram/traffic/parking lane, and the bike lanes are half that width, what do you get?

The most over-allocated, least efficient mode here is obviously motor vehicles — in part because they are allocated two lanes but one (at least in AM peak) is wasted on parking.

Meanwhile the footpaths get so crowded that many people simply walk on the road. In this terribly fuzzy mobile phone footage, you can see a bloke in a wheelchair give up on the footpath and take-off across the road for the other side:

(Note: it is perfectly legal to cross the road anywhere that is more than 20 metres from a pedestrian crossing.)

What could they do?

They could widen the footpath at the expense of car parking, particularly on the super-busy western side of the street. In the busiest section between Bourke Street and Flagstaff station that’s probably losing about 20 car spots. You’d lose a traffic lane in PM peak, but so what? Traffic is at a standstill now — it would still be at a standstill. If delays got longer, fewer people would drive.

They could install full time bike lanes all the way down. It’s crazy that cyclists get stuck behind cars.

Better enforcement of motorists blocking intersections; you see this every peak hour. (Could be a money-spinner for a cash-strapped government, in fact.)

And more fare gates at Flagstaff could ease congestion there, particularly in morning peak.

Ultimately, the station and trains are the most efficient mode available for getting large numbers of people into and out of the CBD. It already does this very well, but making the area more efficient and safer for pedestrians is vital.

Update: The video keeps disappearing out of this post — possible WordPress bug? The direct link is here.

Update 12:30pm: Someone anonymously sent me a link to what looks like it should be a Bicycle Network page with detailed stats, but it doesn’t work. The region or state specified is invalid

Update Thursday: I didn’t even notice this before — the Clearway (and thus the bike lane) inbound/southbound on William Street only operates during PM peak. What sort of craziness is this?! 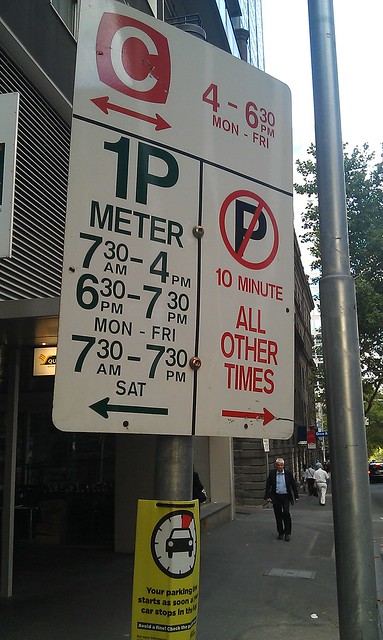 20 thoughts on “William Street — too much space for cars?”