While I cringe at the “bogan display” in the supermarket selling Australian flag caps, t-shirts, capes, stubby-holders and so on, I quite like the (in comparison understated) flags that have appeared on the trams during the week.

My recollection growing up is of small flags in this position on the W-class trams, though I don’t recall if it was all the year round, or just close to Australia Day.

Even the Royal Tram was sporting a flag on Thursday: 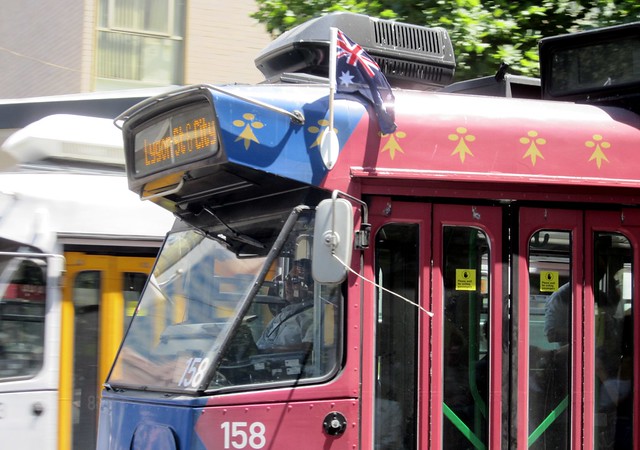 Presumably passengers on trams with flags are not more likely to be racist, as research on cars with flags claimed last year. (If bogans and racists have claimed our flag, we should claim it back, I say.)

Less patriotic than flags was the placement of one of the big Myki stickers (placed over Metcard machines a few weeks ago) onto the outside of this tram. Perhaps the miscreant was protesting against the lack of ticket purchase and top-up on-board? 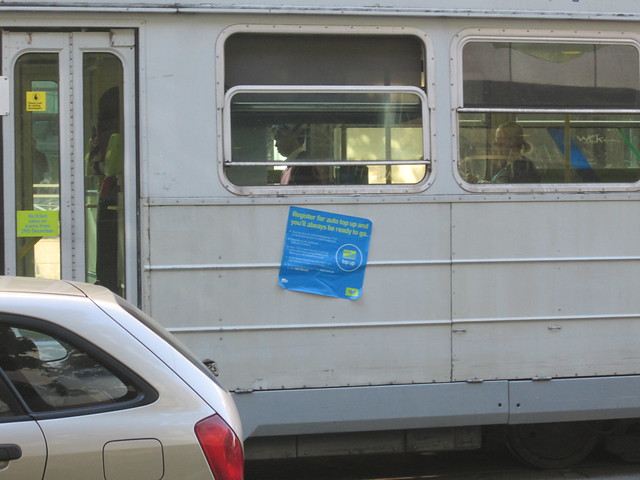 6 replies on “Happy Australia Day (on the trams)”

I will always remember Australia day 2013 because was granted my Australian citizenship today. The ceremony was held in the St. Kilda Botanical Gardens by Port Phillip council. Everyone at the ceremony got a smal Australian flag like the one on the tram as well as a native plant too.

Why did they bother wasting money and time printing (probably expensive) heavy plastic stickers to cover the now useless metcard vending machines on the trams?? Wouldn’t it have made more sense to just remove the vending machines and metcard validators when Metcard use ended? Is this equipment able to be reused for a transportation system elsewhere in the world or is it all going to be scrap?

I would imagine that there is a lot of good stainless steel, copper wiring, and plastic that could be recycled and even generate a bit of cash for Metro and Yarra trams if this equipment can’t be reused.

The old Metcard equipment did seem more rugged than some of the new Myki equipment now in use. The touchpads on the new Myki gates at Flinders St. Station are already looking quite worn and they have just been installed fairly recently. I’m surprised that the image of the “card in hand” on the touchpad surface is just rather lightly painted on instead of the entire surface that gets touched being made of tempered glass or some other more durable material that wouldn’t look worn after such a short time.

Agree with Jed. I saw an old chap with thick glasses board a tram and trying to touch-on his Myki on an old Metcard machine because it had Myki stickers on it.

How silly is it to not remove the old Metcard machines?

And i just found out that PT is free in Perth CBD!

Do the commenters that are lamenting about the Metcard machines not being removed really think they are going to be left in place forever?

Think it through guys… it takes time to remove equipment from 500 trams and make good the wiring, structural changes, putting seats back etc.

Mark is absolutely right. Despite the rhetoric from the government, the work is far from over. Apart from the old validators (which have started being removed), buses and trams are still running their old Metcard driver consoles, which need to be removed. I don’t know how much these are wired into the other bus/tram systems such as next stop indicators and automatic vehicle monitoring (which links into Tram Tracker for instance).

I somehow doubt they’ll put seats back in the place of Metcard machines though!

@Jacob, there are reasons why free central PT is compelling in Perth but not in Melbourne – to do with buses rather than trams being used for central area travel, and the way the fare structure is set up (no daily fare). See http://www.danielbowen.com/2012/07/26/cat-buses/

Thanks for the reply and link, Daniel. I have now read your earlier article about Perth Buses and free travel. Interesting situation there, but I am sure the tourists and locals see free travel as a positive.

Well, my thinking was along these lines:

We pay for ABC TV and Radio through taxes, otherwise it wouldnt exist. And we spent $1.3 billion on Myki plus maintenance plus the salaries of ticket inspectors. If we paid for PT with taxes only, we would save $1.3+ billion and encourage more tourists, locals, penny-pincher and students, to use PT instead of driving.

Yes taxes may have to go up, but we now have hospital beds being cut due to excessive government spending, ie desalination plant and Myki system.