Before you go looking for it, be sure to read the updates at the bottom.

The gigantic transport mural was perhaps one of the best features of the old Spencer Street station. By Harold Freedman, it depicts the first century of Victoria’s transport — from 1835 to 1935. It was commissioned by the state government in 1973, and unveiled in 1978. 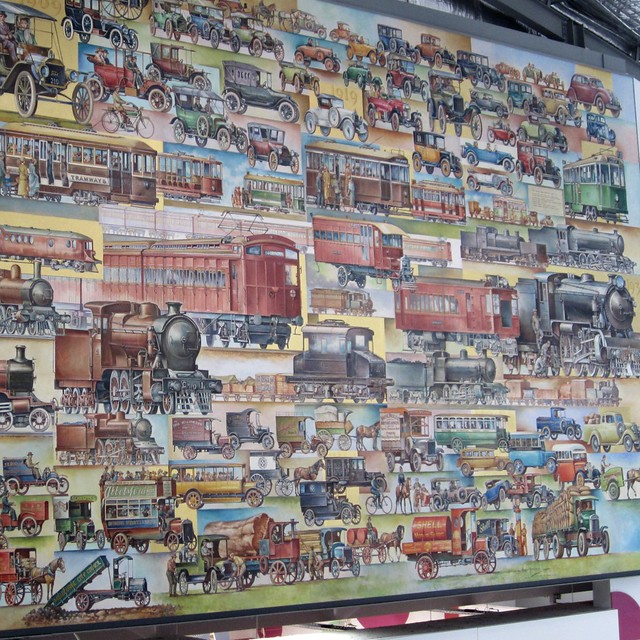 Following the rebuilding and (pointless) renaming, it’s been hidden away in the shopping centre where it’s virtually invisible to most people. (But hey, at least it has been retained on public display.)

Here’s how to find it.

Firstly make your way to the Bourke Street end of the station, either via the platforms if you’re coming off a train, or via the escalators. 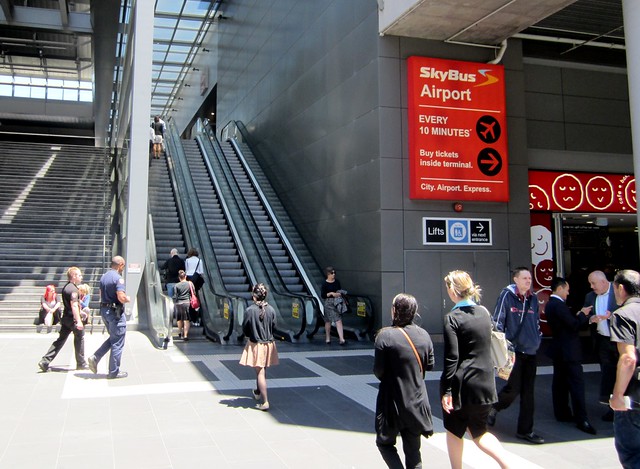 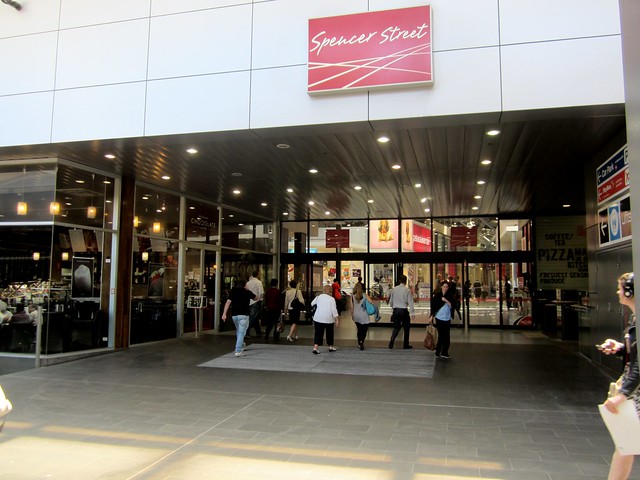 Ignore the shops (both open and vacant) and go all the way to the end. Yeah it’s a long way — more than a full city block. (If you’re coming from Lonsdale Street or further north, you can enter part the way along at an entrance at the Spencer/Lonsdale Street intersection.) 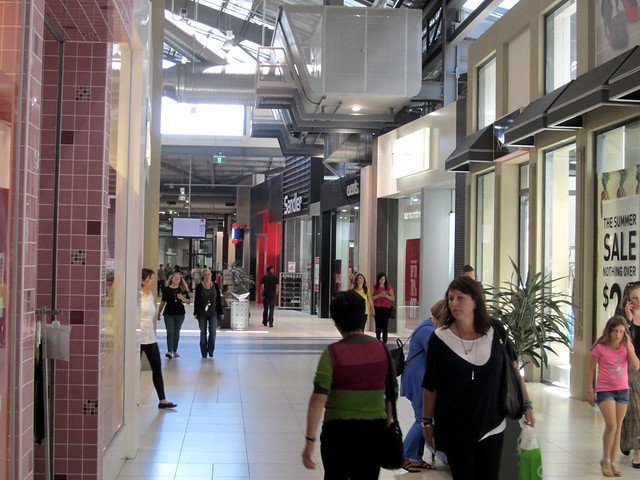 Once you reach the end, look up, above the shops — there it is. 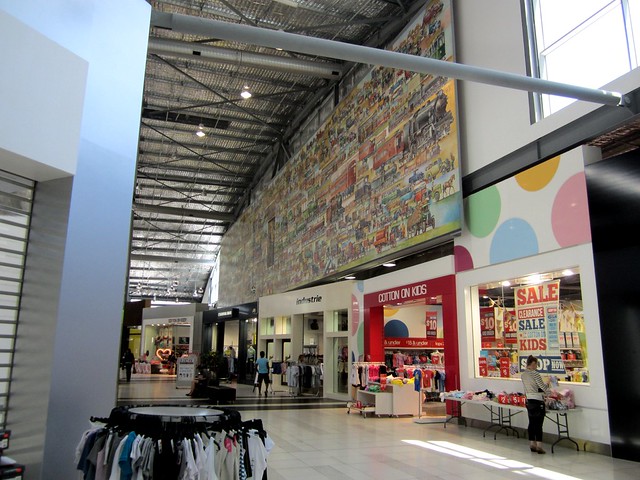 Opposite the mural, in a spot where most wouldn’t notice it, is a stairway (with wheelchair lift) to a viewing area. Make your way up… 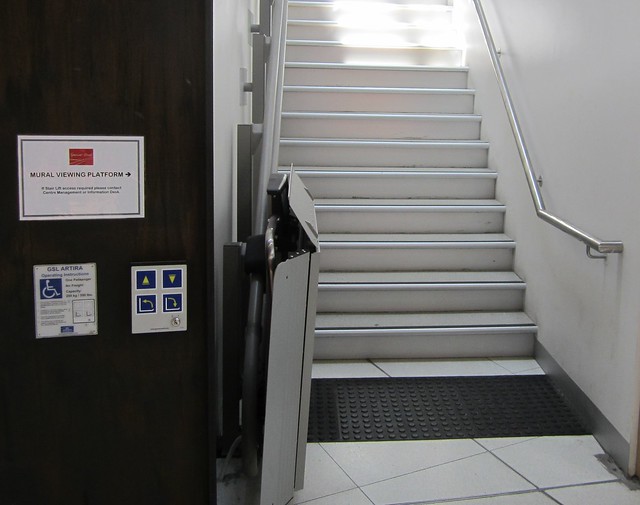 Behold, the mural in all its glory. 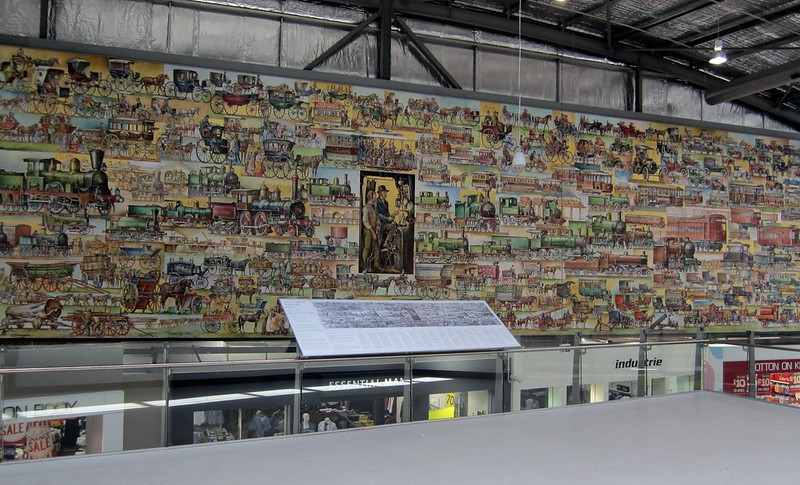 Note the top section is private transport, in the middle public transport, and at the bottom is commercial. This, and the history of the mural, is detailed in the helpful explanatory panel.

The above photo, larger

Update: The mural is included in this Melbourne history app for iTunes and Android.

Update December 2013 — I’m told that changes in the shopping centre mean the mural is not currently able to be accessed and viewed.

Update March 2014 — This Age article from earlier this month notes the mural is still in place, but is now only viewable via one of the factory outlet stores, and is partially obscured. See also: photo from Marcus Wong.

Thank you so much for this guide!! I’m sure I wasn’t alone in thinking that it had been lost forever. It is extremely disappointing that it has been removed from the station itself and dumped in a shopping centre (which itself is a silly addition to the Spencer St area), but at least it’s there. Maybe one day it can be moved to a more appropriate location, eg another railway station, the Town Hall, the State Library, etc. Anywhere would be better than that shopping centre.

I knew it was there (in the “not-the-DFO”) but I didn’t realise it came from the old Spencer Street Station.

I live opposite this shopping centre, it’s depressing how not-busy it is, and not surprising given the lack of signage, low quality shops and general undiscoverability. What a dumb place to put the mural.

Good thing none of your directions included “turn at the vacant shop” – the shopping centre is so empty, one wouldn’t which one you had in mind! :-P

It is hard to believe that the mural could not be better placed. Surely there must be a blank wall within the station itself.

Is the new station better than the old functionally? Sure it looks great, but does it work better?

It would work a lot better if it had decent signs, such as some telling you which platform to go to, from any other platform, for trains to certain destinations. They manage that in large stations in London so it should be possible here.

The Collins St concourse provides better access from the suburban trains to the Collins St trams and Docklands and thus was good. Like the Bourke St footbridge before it.

Banning pedestrians from the subway was not so good as it reduced access to Little Collins St.

I’ve been in that shopping centre at least half a dozen times and I had no idea the mural was in there at all. What a bizarre place to put such an amazing item.

Apparently there are two dogs depicted in the mural. If you have a spare hour or two you could search them out.

Yep – I found it by accident there one day in that obscure spot you described, being above the shopfronts at the far end of the building!

The place is in some sort of competition with Harbour Town to become Australia’s first ‘dead mall’ by the look of it!

Thanks for your info

never noticed the viewing platform. thankyou for this bit of info.

I don’t think putting it in Southern Cross Station itself would be a good idea… even though it’s a roof it’s still more exposed to the elements than it’s current location or in the old Spencer St Building. I wonder if there’s room for it at the Melbourne Museum.

I remember when they built the Bourke Street walkway/overpass, they chopped into the old Spencer Street building, the Mural was kind of turned on a corner so it was an L-shape for a while. Then the building went altogether.

Southern Cross may look amazing from a distance or even above, but it’s a downright travesty of a place to get around. It desperately needs the old subway reopening which would make it far easier to switch between platforms.

I’ve only just found out that the man in the hat is my Great-great-grandfather. Now I can’t wait to get into the city to take my own photographs. Thanks for the great description of how to get to view it.

In those days nearly everybody wore a hat.

Following Daniel’s tip-off on this page, I added the mural to my Melbourne Historical app: http://www.iwriter.com.au/apps/melbhist/

Makes a great little-known entry and will hopefully lead to more people seeing it. Thanks for the info.

I work at this station and I didn’t even know where it was located,go figure.

As of July 2013 the entire north end of the shopping centre has been closed, the mural left on the wall, above the remains of the gutted shops:

Hello Daniel,
I went yesterday to have a look at the transport mural at Spencer Street and was surprised and disappointed that the viewing platform and descriptive plaque have been removed. The view of the mural from the shop is very obscured by wires, lights and air-conditioning ducts. I intend to write to the shopping centre people to let them know that the present situation is not good enough.
Incidentally, your website description is now out of date as to its accessibility.
David

Thanks for this great guide to the mural. It’s a pity the viewing platform is gone. At least the mural is still there and lets hope it gets “resurrected” in the future. Nice work Daniel.