Metro missed its performance target in December, issuing an intriguingly vague statement which initially did not mention the compensation payable nor link to the form required. It’s since been modified to include those. 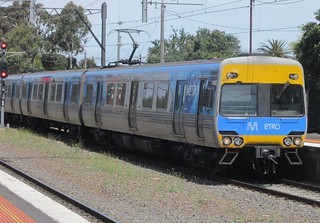 Generally speaking if you have a Pass of 28 days or longer, and travel on trains more than 10 times in that month, you get the equivalent of a daily Myki Money fare back… for some Yearly users, this is actually close to the cost of two daily fares.

You’ve only got until the end of the month to claim, so get to it.

It raises the question of why the compensation can’t be automatic. It’s something I recall raising with officialdom at one point. One reason cited was privacy considerations. But there’s ways around that.

The Myki database is used to rule whether a claim is eligible. This means it could also be used to actively work out who should get the compensation. If the government had pursued this, it could have been a genuine benefit of Myki over Metcard.

Metro: Hey PTV*, we owe people compo! Can you let us know how much money is payable?

PTV: yeah no worries Metro. We’ll just scan the database. Okay, apart from the people who opted out of getting auto compo for privacy reasons, it’s X people, with a total of $Y due.

PTV: got it, ta. We’ll pay it into the appropriate Myki accounts

Of course, with less than 5% of people bothering to send the forms in, one doesn’t need to be a brainiac to realise why this doesn’t happen.

A semi-automated form is doing the rounds: enter the details and it’ll produce the filled form for you to post.

…I assume the post has lasted this long without comment because it’s so self-evident that is should work like this.
What else is there to say?

When i was Yearly, and therefore registered, Metcard holder, i could never understand why i wasn’t automatically compensated. I had hoped myki would have had this as a default feature…

Why not go further? Myki knows where and when you touch on, and (normally) where you touch off. Why not process the data and directly compensate those customers that were directly affected by a major disruption? Who knows, this might even be cheaper than trying to compensate everyone.

The beauty of this approach is that the processing could be done in a completely independent system to the actual Myki system. Just dump the data, crunch it, reload the compensation list. Almost no software risk and development could be done independently of Kamco.

But in the event of a major disruption, plenty of people who are significantly inconvenienced won’t be touching on or off at all. They wouldn’t be captured at all in this approach

Valid claims filled in using the semi-automated form are being rejected by Metro: http://www.reddit.com/r/melbourne/comments/16yppx/a_nice_redditor_made_a_myjki_form_generator_for/c80my8j

I wonder if they would accept a form filled in using a typewriter?

Going further, why shouldn’t every holder of a registered Myki card receive compensation? I can understand why the threshold was set as a monthly under Metcard, but with Myki there’s no reason to effectively discriminate in favour of commuters and against people who use the system regularly but not in a pattern that requires a 28-day pass.