I’m a bit bemused by the apparent mass surprise of people that Myki cards expire. Every other type of smartcard expires. Credit cards get replaced every 3-4 years. Despite the system cost, Myki cards don’t magically last forever. 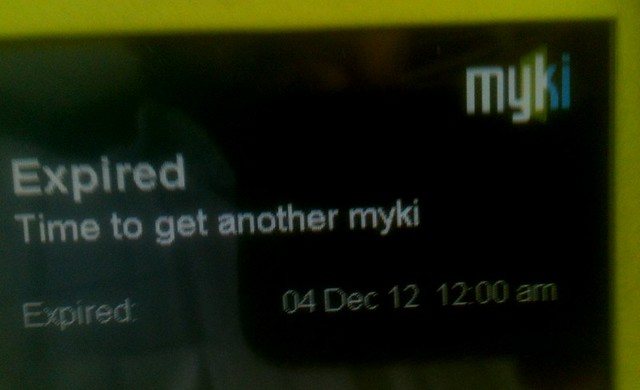 Right from when the system first went into live pilot in Geelong in late-2008, it’s always been known (though not widely) that Myki cards expire after four years — the question has always been what happens when they do expire, and how are replacements organised?

What is surprising is that the TTA only released details of the process last Wednesday, after the first cards issued back then started expiring. And I expect it was helped-along by one of the first cards to expire belonging to Channel 9 reporter Andrew Lund.

And of course there’s a sense of irony in that cards are expiring before the system is fully rolled-out. (If the election hadn’t resulted in a change of government, the plan had been for Melbourne’s phase-out of Metcard to be done by Easter 2011.)

After four years the cards stop working, with the readers reporting an “expired” error. You then have to get a replacement.

This can be done over-the-counter at the Southern Cross PTV Hub. Apparently at some stage in the future you’ll be able to do it at any Premium station.

Or you can send the card away for replacement, but it’ll take 10 days to come back to you.

Or you can buy another card, then fill in a form and get the balance of the old one transferred, as well as a refund on the new card’s purchase price.

Thankfully you can organise the replacement before the card has actually expired, if your card is “is approaching its expiry date” (though it doesn’t specify precisely what “approaching” means).

It’s unclear if the replacement cards will have higher-level security, to counter the theoretical hack identified last year. This vulnerability is unlikely to be exploited in the real world any time soon, so replacement of cards is not considered urgent, but they might want to get it done within the next four years. 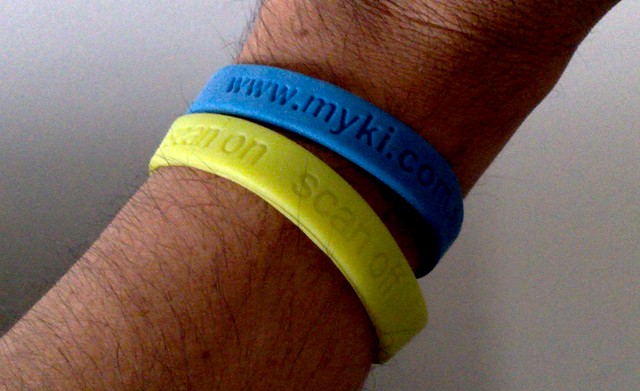 Do you get an expiry warning?

It appears not, at least not for unregistered cards. Myki readers will flash warnings if your balance is low, or your Pass is about to expire, but it seems nothing is highlighted when the card itself is close to expiry.

You can check it on a Myki Check machine, or a vending machine, but if you only use buses or trams, you might never get a chance to use one of these.

If the card is registered you can check it on the web site.

And they say that registered card-owners will get an email in advance, though it’s not clear if that process is actually in place yet.

All cards expire eventually. I assume the TTA made a wild guess that four years was a reasonable amount of time to set, perhaps anticipating a higher failure rate after that.

Brisbane’s Go Card, based on a different version of the MiFare smartcard, has a ten year life.

I had a look around — a lot of other systems (including Perth Smartrider, San Francisco Clipper and London Oyster) don’t seem to nominate a card life. I suppose either that means they keep going until they stop working and you get them replaced, or they just don’t make it public, and have measures in place to issue replacements when it happens. Of course in these cities, if you get stuck, there is a single use/short-term ticket option as a backup.

How could it be better

For a start they should have publicised the replacement process ahead of the cards starting to expire, and targeted it at those most likely to be affected — those who were the very first to get Myki cards: Geelong bus users. They could have also ensured that cards could be replaced over-the-counter at locations in Geelong (and the other regional cities), as well as in Melbourne.

And the readers should give an advance warning, so it doesn’t just get sprung on you.

Although I’m not currently using it, my first Myki card is from April 2009. I’ll be interested to see if this process has improved by the time it expires.

Finally, perhaps instead of a hard expiry date, with the card suddenly unusable, they should have provided a month’s grace, and/or automatically sent out a replacement if the card was registered and in regular usage.

Update 9/1/2013: It turns out the emails are being sent to at least some people, though this one was received just two days before the card’s expiry, which is inadequate to arrange a replacement before the card is no longer usable: 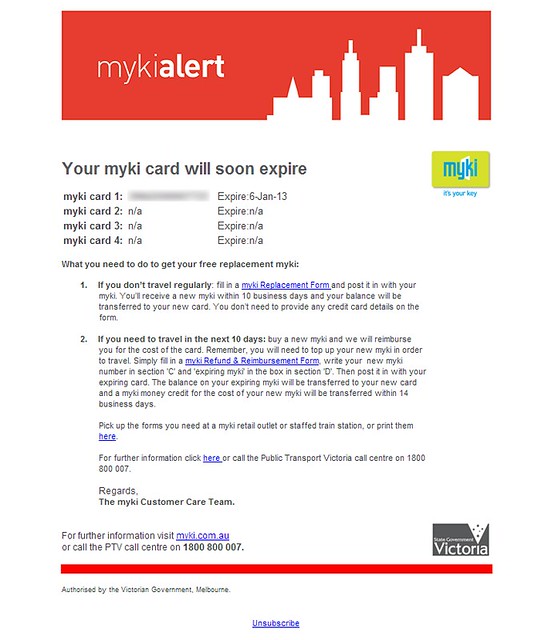 While they are improving the replacement card issue, they could also improve how they deal with replacement cards generally. Limiting replacements to a single station in the CBD or requiring people to post it back and wait half a month for a new one is archaic. Surely in this day and age, cards can be unlocked over the phone and more than one location can sell physical cards.

Yes no cards last forever, but there’s no reason to artificially expire them, and certainly not after such a short period.

Thanks for filling us in on this issue.
It’s funny how myki’s performance can be below even the banks.
To go to the Southern Cross PTV hub from my city office costs me (soon to be) $3.50 on the train or tram and takes about 45mins round trip.
Another example of how, after 6 years, myki people just didn’t think things thru.

None of the general public knew these cards would expire. They may have been able to read about it in terms and conditions, but they shouldn’t have had to. A lot of people would have just expected them to keep working.

Why isn’t an expiry date printed on them? That would be a simple fix. Each batch will have the same expiry date, after all.

Indeed, as others have said — they’d expire by falling apart. There isn’t any reason to artificially introduce a lifetime to them. Credit cards usually start falling apart well before the expiry date, and you could argue there might be security reasons to expire them (I have no idea what they are though). And the process is basically seamless.

The real issue, as you highlight, is the complete lack of design around card expiration and replacement. Clearly they thought “it’ll be ages away, lets plan that later” then, lo and behold, turns out four years has passed. Just another poorly designed part of the system.

Just like the remote card unlocking thing, they’ll sort this out I’m sure. I don’t think anyone is under any illusion that Myki hasn’t been mismanaged or underdesigned — clearly it can be fixed though.

Registered customers could be sent a new card (provided they haven’t moved house without updating their details), but it would have to be a card with nothing on it. So the person still needs to top up the new card and apply for a refund of the old card balance. It’s not much quicker overall to send a new card and you risk some people not getting them and the new homeowner being free to use it for a while until the intended recipient notices.

Surely they could at least e-mail registered users advising that the card was going to expire and explaining the replacement process. I agree that four years seems like a short expiry time though.

‘And they say that registered card-owners will get an email in advance, though it’s not clear if that process is actually in place yet.’

Carolan said this already happens and that people need to keep their email address up to date.

I think they do email registered users. The whole problem of having cards sent out with no value and requiring topping-up could also be avoided if the website would let you transfer value between cards. But it doesn’t.

I would love to see the ‘Architectural Decisions’ document for this project.

Most large projects have to have some governance and any ‘decision’ need to be agreed to and ratified by a oversight group. Normally any large (costly) decision will need an options paper to highlight the choices.

So which clowns agreed to this decision and why? What were the alternatives? What possible reason could sway a governance group or Steering Committee?

There was a governance group and Steering Committee?

Philip – You can only change the card balance using a myki device. In future, you’ll probably be able to go to a station office and the guy/girl at the counter will be able to do it for you using their machine.

Oyster cards don’t expire and users can hand in their card at any stage and get a refund of the card deposit and any outstanding balance. BBC ran a story on the revenue aernd by Oysters in 2010.

@Andrew – It would be difficult to manage and online transfer, as the cards themselves are where the value is stored. You could do it, but it would take a while for the value to move across and in the meantime people could use it on the card its coming off, then suddenly have it appear on the other card regardless.

What would be possible is to simply do it at the myki top-up machines, at least for full fare paying passengers. The machines already dispense new Myki cards. It should be fairly easy to program the machines to read an expired card, copy all the information from it and write it on to a new card which would be dispensed on the spot. The expired card would remain bricked.

Four years is too short, but there’s another issue: MANY cards will expire in Dec 2013, and going through the process of getting a replacement is going to be a bun fight when 100,000 people a week are trying to do it.

What they should have done was to have cards expire on the next birthday after X years – like most driver’s licences. This would spread the load throughout the year.

And they should warn of expiry on the FPDs (readers).

Other people on the Myki Panel have had much bigger discrepencies. Why is this?

All my bank and credit cards have the expiry date prominently printed on them. My mydi doesn’t.

I have a registered myki – and haven’t received an email advising of its pending expiry (in 2 weeks time). I called them today and was advised they do not have a process in place to email registered users (grrr). I noticed the expiry date right after I topped it up (double grrr)

Just received an expiration advice (2 month warning) for a card obtained on a new account less than 12 months ago! Another error it seems …

@Peter – the more likely answer is that your card was issued from old stock. For some reason Myki decided to set the expiry date based on card manufacture date, not when it is sold!