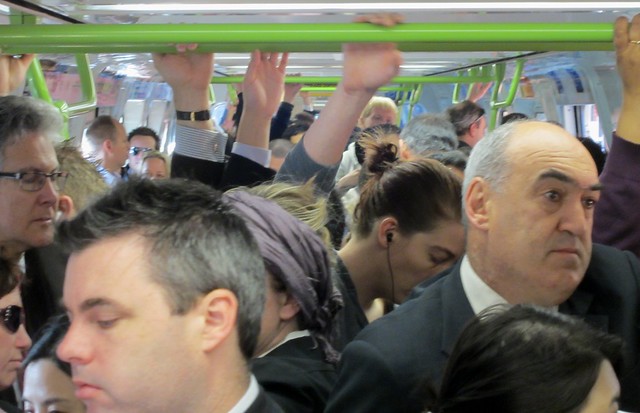 This seems to cause endless confusion: A figure of 798 (or 133 per carriage) is often incorrectly implied to be the capacity of a Melbourne train.

According to Victorian government standards, a six-carriage train is considered “full” if more than 798 passengers are aboard.

But 798 is not a capacity figure, it’s a “desired load standard”.

It’s saying if you go above 798, then things are reaching a crowded level and something needs to be done to resolve it and cope with further growth.

As one government document describes it:

Suburban trains are deemed to be overcrowded if the average load over a one hour period as counted at the city cordon exceeds 798 passengers. This load standard has been set to avoid excessive loading (greater than 1100) on individual trains at the peak loading point on the route. Beyond this load, passengers regularly complain about overcrowding and it becomes very difficult to maintain the reliability of the service as loading and unloading times become excessive.

Part of the confusion is that the operator contracts are worded to say “Maximum capacity”, which is extremely misleading. Perhaps the intent (when this was originally instituted, which I think was back in 1999 with privatisation) was to ensure that “load breaches” (going over the limit) are taken seriously.

Volume 1 of the Train Franchise Agreement, section 6, has a lot of detail, including what happens when a load breach occurs — basically PTV and the operator review it and figure out what they should do (if anything) in response.

It also notes that the load standard can be varied, for instance to account for different designs of train (or, as may be relevant at some stage, longer trains if we end up with 9-car services). Schedule 6 (in volume 2) gives a bunch of detail about the methodology in calculating it, and on page 48 it specifies the 133 per carriage figure (83 for Stony Point trains, which are run with diesel sprinter trains).

There is a PTV page with recent load survey results — they manage to be completely vague on precisely what it is they’re measuring. No wonder people are confused.

So what is the capacity of a train?

The actual absolute capacity (the “crush load”) is much higher, and would be very unpleasant to experience.

Vicsig has some capacity figures (6-cars):

My guess is the X’Trapolis figures are from before the recent programme of removing some seats (which also matches the newer carriages in the fleet). Note also that one Comeng 3-car set was altered as a trial by Connex.

Hold off on comments about the Myki card expiry thing — I’ll look at this in a day or two.

Good to see these figures laid out. Regarding our discussion the other day Daniel, I’ve been unable to find any figures that accurately reflect the crush load of the TTC Rocket trains, but I have found some for the older models still running the tracks over in Toronto. Which is apparently 315 per car or 1890 per six car set. The TTC rockets should theoretically hold a few more, as they don’t have any internal driver cabins and are fully articulated and feature open passage between carriages; so not only is the crush capacity a bit higher, but also the potential to actually reach the crush capacity is vastly higher as people can move between carriages freely.

Personally I’d love to see Melbourne look at something like the Rocket for any future fleet purchases. They’re comfortable trains, and movement once aboard is vastly easier and therefore quicker than any of Melbourne’s fleet. Which has the flow on effect of allowing faster boarding and alighting times, which should allow more trains to run per hour, thus having a multiplying effect on total passenger capacity.

Did you read part 4 – they are pretty clear about how what they are measuring and how they measure it. You shouldn’t put such strong statements in your articles just to seemingly attack the government.

@Laura, they talk a lot about how they measure against the benchmark, but nowhere that I can see do they actually define what the benchmark is, or what it means.

As shown on your (great!) photo: The best innovation for crowded trains was the installation of the overhead bars. Having something to hold onto when in no-man’s land stops you colliding into a guy’s backpack

I suspect it’s quite common to approach the crush load – particularly when a major disruption has occurred. It’s uncomfortable, but workable.

Just look around your carriage – is there roughly two standees for each seated passenger? If yes, then you are reaching crush load.

Look around your carriage again. If there is roughly one standee for every two seated passengers (and all seats taken), you are roughly at the desirable figure. I wouldn’t think this level to be a particularly crowded train.