Back in June, when you could still buy unvalidated Metcards (eg at railway stations) I bought a Zone 1 adult daily and popped it away.

I am now selling it for charity, either for those of you who want to take one last train ride with one (yeah even though you can still buy one on a bus or tram) or people who want an unvalidated Metcard for their ticket collection (and were foolish enough not to buy one earlier).

And of course, I filmed myself buying it:

(Lookie here kids, this is what we used to do when we could buy a ticket just for one day of travel. Ah, those were the days.)

I was going to wait until December for this, but the window of opportunity to use it is shrinking fast, because railway station Metcard validators have started being removed, on the basis that almost every Metcard out there in use has already been validated. 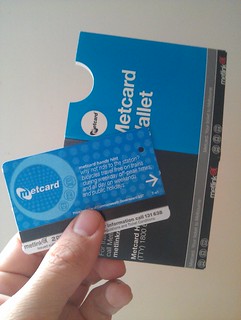 I’m not listing stuff on eBay anymore, after eBay’s subsidiary Paypal decided they no longer wish to do business with me. (In short they’ve decided I’m some kind of fraudster, but won’t tell me precisely what it is I’ve done wrong — so my Paypal account is “Limited” which means I can do bugger-all, and they won’t fix it. I should probably talk to the Financial Ombudsman about it at some stage.)

Your name (publicly displayed) can be anonymous or an alias, but you must leave a valid email address. (As per normal comment moderation, if it’s an email address never used here before, you may see a short delay before your comment is published.)

The reserve price is $7.60, the original price of the ticket.

I’ll chuck in a pristine Metcard keepsafe wallet (a glorified cardboard envelope issued by Metlink). Fool your friends by keeping your Myki in it!

The winner will be the highest bidder as at 8pm AEDT on Thursday 29th of November. If two of you manage to bid for the same amount, it’ll be whoever placed the bid first.

I’ll contact the winner directly via email. If the winner bails out for some reason, I’ll chase the second-highest bidder.

I’ll ask for bank deposit and send it as soon as the money comes through. I’ll pay the postage to anywhere in Australia. 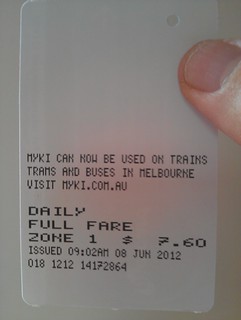 All funds raised (including the original $7.60 purchase price I paid for the Metcard) will be donated to the Australian Red Cross. (Note: this has been organised without the knowledge of the Red Cross… but I hope they don’t mind.)

I have no idea if this will work in actually raising any charity funds… but I hope someone is interested. (Last time I tried something like this, nobody was!)

Are you going to direct the money to any specific cause? If so, can I suggest the Caribbean? They’ve received a big beating from Hurricane Sandy and hadn’t recovered from the earthquake in 2010.

Nitpickers corner – to travel like it’s 1999 you’d want one of the original yellow, blue and red Metcards;
http://adamluke.com/2009/11/17/metcards-i-introduction/

$15, but I request the Metcard is signed ‘Daniel Bowen, Chief Complainer’ even if you have officially resigned from the position.

@Julian – how much if he signs it – Daniel Bowen, Transport Minister. :-)

Unrelated, but are you doing Movember this year? If you are I’d like to cross-donate again!

You’ll even get a slight discount on your donation because I’m set to Canada (which has an ever slightly lower dollar)!

@Julian, I decided that the world didn’t need to be inflicted with my moustache again, so I’m not doing it this year!

But Daniel – you are inflicting your Mo on us everyday – lol!

If you can source me a pristine validated or unvalidated second card I will offer up $25. Framing it requires a front and back view ;-)

I found a used Metcard today. I thought, I must keep it for history. I should have kept old tram, trains and bus tickets. But a pristine Metcard, with your signature on the back, $30.