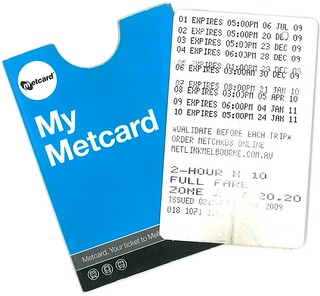 At railway stations around Melbourne, they’ve started removing Metcard validators as part of the final switch to Myki. In some cases, some station entrances have no Metcard validator at all now.

Accordingly, the the rules have been updated to say that an unvalidated Metcard can’t be used for travel if you can’t find somewhere to validate it:

All ticket validating devices for validating or re-validating Metcards at the entrance to designated areas are being progressively de-activated and removed.

On and after 12 November 2012, a Metcard will be valid for an entry to a designated area where the ticket validating devices have been de-activated or removed, or for a journey on a train commencing from that railway station, only if the Metcard had previously been validated and the whole of the journey or the entry conforms with a journey or an entry
authorised by it.

On and after 12 November 2012, a Metcard that had not been previously validated prior to an entry to a designated area where the ticket validating devices have been de-activated or removed is not capable of being made valid for that entry or for a journey on a train commencing from that railway station.

It goes on to say that if the gates won’t let you out (which may happen say trying to exit a CBD railway station after commencing a trip with a Metcard which was validated on a tram or bus originally, but was not validated when you started your train trip) you can show it to a staff member to be let out.

It also specifically flags that no Metcard is valid on a service commencing after 3am on the 29th of December (in other words, the end of day in PT terms of the 28th).

So I guess the final service you can use Metcards on would be the last Nightrider bus trip commencing just before 3am on that Saturday morning. No doubt some fans will work it out and travel with Metcards on that last trip.

At this point, anybody who has unused Metcards they can’t use should trade them in for Myki Money. This doesn’t incur the old $9.80 fee, and can be done over-the-counter at Premium railway stations (for most Metcards) — or if this isn’t convenient (or you have Weekly and longer term tickets) then you can do it by post.

When are they going to start removing the Metcard vending machines from trams? That should free up space for at least another two seats (or more likely, 3 more standing passengers) I would have thought.

Thanks for the advanced warning, Daniel.
I “cashed in” my old Metcards at Parliament and made a nominal profit. I was paid the current value of the ticket which in most cases was more than what I paid for them (eg Weekenders, I made 10% nominal profit).
The only silly thing is that the Metro person had to write out the details of ALL my old tickets in long hand on a form. Very bureaucratic!

I can’t see this breach of previously announced rules can stand up, so might have to test it, in court if necessary.

When I get back from Perth, which has a visitor-friendly dual system, what happens if my 901 bus does not have a working Metcard validator, as the one on the way out and many others don’t seem to?

Thanks for this info Daniel. Ill get onto this. I’ve been avoiding paying for a Myki. I was part of a commuter club prior to going on maternity leave so I had to surrender my card. Because I won’t be going back full time, it doesn’t make sense to rejoin the commuter club program. I’m a bit annoyed because when mykis were free to obtain when they were first introduced, I was told not to apply for one because of being part of a commuter club. So now when I go back to work I have to purchase one. No big deal I guess but it really irks me to pay for a plastic card! If it came loaded with some Myki money equivalent to the cost of buying the card I wouldn’t have a problem at all.

Out of interest, my sister visits the city once a year by train to show her three kids the myer windows. Does that mean from now on she’ll have to buy 4 Myki cards plus put money on them, just to use them once a year? If so, it’s much cheaper for her to drive in and park. It seems ridiculous that one off or rare users will be forced to outlay so much to obtain and travel with a Myki.

I saw someone jump on a tram at Flinders Street, buy a Metcard from the ticket machine and jump off again and head to the station. Some people are very resistant to change.

@Miabelle, the cards have dropped to $6 ($3 child/concession) which isn’t too bad for regular users. You’ll make that back in cheaper fares in a few days.

Yes, it’s a pain for occasional users. Assuming your sister’s kids are 4 or over (under 4s travel free) and she can’t borrow someone else’s card/s (which is legal unless the card has a Myki Pass on it), she’ll need to buy cards for each of them ($6 + 3 x $3 = $15) and load money onto them. The challenge then is to hold onto the cards for next time (the left-over balance never expires).

Remember if she travels on the weekend it’s a maximum of $3.30 fare for the day, so the fare itself might well be cheaper than parking + fuel, though the once-off cost of Myki cards is likely to tip the balance, unfortunately.

(Note: one way to circumvent it before December 29th, as Andrew notes, is to buy on a tram or ask a bus driver to sell you Metcards, even if you’re not catching the bus. No guarantee s/he will agree to it, however!)

Due to a recent complaint I made to Metro regarding the lack of information given to commuters at Hughesdale during a service disruption, last week I was sent a complimentary daily zone 1 met card. They must be trying to use all of the remaining stock. I made sure to use the Metcard while there was still a validator at the station.

Andrew – that may have been me you saw! I lost my myki the other day and have several here at home. I didn’t want to buy a whole new card and top up just to get home – ie $10. I thought I was being creative. The metcard machine ate all my coins and didn’t give me a ticket anyway. I’ve been on myki for ages…there could be many reasons for someone doing this. Or they could just be avoiding the inevitable!
This hightlights to me the fact that myki still has no resolution to the short term ticket problem.