Last night’s skyline from the country: 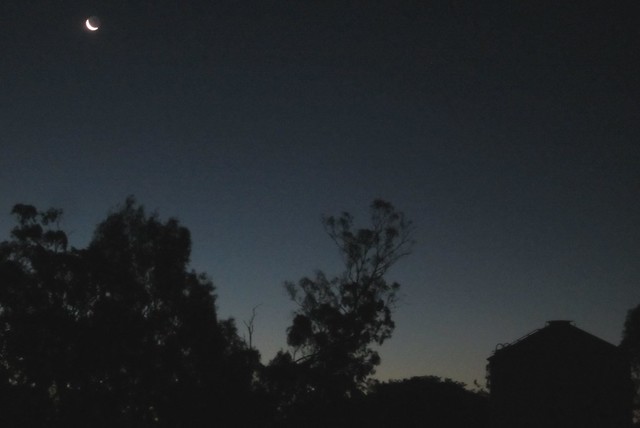 It’s not often I have to be urgently somewhere in the car, but it was the case yesterday. “Don’t be late!” I’d been (lightheartedly) told.

It’s not a trip that is completely impossible by public transport, but with only three trains a day, and the first of the morning getting me there 45 minutes late, that wasn’t an option. It had to be a trip made by road.

I’d started the car briefly on Thursday to check I had enough fuel to make the trip. That may have been my undoing.

When I got in the car on Friday morning to head north, it wouldn’t start. It grumbled and spluttered. I sat back for a moment, swore under my breath, then tried again. No go.

I contemplated possible plan Bs, and how it was possible this could happen after (as I recall it) zero engine-related troubles with the Astra since I got it in 2008 (and no hint of forthcoming issues at the last service).

The third time, it finally came good, but with a deep rumble somewhere in the engine. I thought I might as well go for it, and eased it out of the driveway. As we moved down the street the rumble stopped, and it was fine.

I didn’t dare stop along the way. Two and a bit hours I’d made it, and gratefully pulled into a parking spot.

Since then it’s got me home again too, even with a brief stop along the way.

So, those of you who know more about cars than I do (which is most of you, I suspect): is it the battery? Is it on the way out? Time for a replacement?

And if so, any particularly recommended vendors for someone like me who probably doesn’t have the time or energy to do it himself?

Sounds like it to me; particularly as you don’t drive the car regularly or long distances. The other issue that it would be having is that the engine gets stiff if you don’t use it regularly, which makes it harder for the starter motor to crank it over when the battery is weak.

I used to have the same problem with my first car. The RACV mechanic suggested that I drive it to work a couple of times a week – a suggestion I did not take up.

I can appreciate how stressful it must have been for you yesterday morning.

Batteries are normally only good for about 5 years.

Although if it failed to start twice, and then started the third time, I would not be so sure that the battery itself was the problem. If the battery can’t deliver enough current to start the engine, then it is still not going to be able to, a couple of minutes later.

I don’t like the sound of that “rumble” in the engine.

How long did you run the engine on Thursday ? If you are going to start the engine to make sure it works, then at least drive the car around the block. Don’t start it up and then turn it right off. The reason is that the spark plugs won’t heat up, and will be left “fouled” due to the low temperature and rich mixture, which will cause starting problems the next time you try to start the car.

Three years is acceptable for a standard battery, so I would replace it regardless. If the engine turned over at all on each attempt to start, it might have started with the third try because you held your face the right way.The engine sounds like it might be a bit low on oil, so check the oil level.

All the comments about batteries are valid, but when you said it wouldn’t start, was the engine turning over or not. If it was then the battery could be OK. The other issue is that it could be the alternator that has died and is thus not charging correctly.
I’ve also had a rare case where an old Camry had battery and alternator replaced but still the battery would go flat occasionally, for no apparent reason. One RACV bloke had a few more thoughts though and we put an ammeter on the battery and with supposedly nothing on, the battery was draining at a rate of nearly 6 Amps. It turns out to be the wiring loom to the driver’s door electric mirror, but that took the auto-elec nearly two days to find.

RACV are good for battery replacements and they take the old one away.

Thanks all, yes, the engine did turn over when I initially tried it.

On Thursday the car had literally been started only long enough to check the fuel gauge.

Will check the oil; in the time I’ve had the car, it’s never gone low, but will verify.

Any recommendations as to where to get the battery replaced?

(I deliberately am not an RACV member; I get my road service via a different/cheaper company… maybe I should try out their battery replacement service.)

Daniel, you dont need to crank the engine to get the fuel gauge reading.

Just turn the key to the “on” position (it will also light up the seat belt sign and other signs.) and the fuel needle will move to show u how much petrol is left.

The good batteries with 3-year warranties have a “green indicator” at the top which turns dark if the battery is gone, eg:

Anyone can call 13RACV, follow the prompts, select “battery” and get a RACV battery person to come around to you. No charge (well, hopefully, the battery will have some).

@Roger, you’re right, anybody can ring RACV. But the costs are higher for non-members. In my case it looks like it’d be $244 all up.

re post #6 – very interested in your comment about an alternative to RACV, which seems to keep putting its charges up in spite of cars becoming more reliable (but I suppose they have to pay for their flash resorts!) I wasn’t aware that there was an alternative, but as a result of a Google search, I think I know who you mean. Have you had to use the alternative and are you satisfied with them?

A few months ago I bought an Australian made Century battery from an auto parts store ( It might have been an Autozone store) in (or near) Cheltenham.The battery in the car was the original one from when the car was new in 2007 and the engine was starting to crank a bit slower than it should. The auto parts store was on the Nepian Highway a bit south of Southland shopping center. I bought the battery and the salesperson offered to install it for me for no additional charge. I had planned to install it myself so the offer was welcome. He even had a small battery to clip onto the car’s battery cables to keep the time on the clock and radio presets from being lost and needing to be reprogrammed.

A mechanic can preform a load test on the battery to assess it’s condition but a 4+ year old battery is nearing the end of it’s life anyway and is worth replacing if it is suspect.

I also only drive my car once every week or so but when I do I make sure it is a worthwile distance as short trips are hard on a car’s engine and battery. Driving a car until it is at it’s full operating temperature (about 20 minutes or more) both charges the battery properly and drives moisture and condensation out of the engine oil and exhaust system. This is especially important during the colder months.

@Jed, thanks, will check that out.

@gxh, RACV not only funds its resorts, but more importantly to me funds advocacy for things I don’t want.

There are several alternatives. I’ve gone with 24/7 Road Services ($55/year) but I’ve never had to call them, so can’t tell you how quick they are.

Both are cheaper than RACV, even with the discounts given to long-term members.

There are probably others out there as well… I haven’t gone looking recently. Some do have restrictions on the type of car they’ll cover (eg age).

Any workshop will change a battery for you, and most will have a rack of them ready to go. Just don’t get ripped off buying a ‘genuine’ Holden battery for the Astra. Alternatively, Burson’s or Repco will have a battery the right size and capacity, so buy that (make sure the poles are in the right position for the length of your cables) and take it to a workshop.

But don’t do any of that unless the battery really is cactus. My last one went nine years.

To test the battery, shine the headlights (not park lights) onto a wall at night and turn it over. The headlights will dim substantially even on a good battery but if they really dim while cranking then the battery has gone flat which it shouldn’t if you have given the car a drive in the last few days. Try it a week later to get an idea if it is discharging.

Could also be that the fuel had drained back into the tank. This would case the engine to not start at all initially and to run rough until the fuel pressure is back (quite high pressure is newded for the injectors). The fuel pumps are electric so you will get presure back after a short time even if you only switch the ignition on without turning the engine over.
If the noise really was a deep rumbling on top of the normal engine running sounds then it is something more mechanical.

Nah, when I changed my fuel filter I had to let all the pressure out of the fuel system by removing the fuel pump fuse and trying to start the car. After reconnecting everything with the new pump in, it only took about two seconds for fuel pressure to return to normal and the engine to start. So I don’t think that would be your problem.

Kmart Auto will do you a new battery. You may even know someone with a Kmart discount card.
I would replace the battery even if it’s not the problem actually, given the age.

We also have difficulties with an infrequently driven car, coupled with kids who fiddle with it. Monthly we trickle-charge the battery back up to full charge.