They shouldn’t feel nervous. Even one death is too many, and more needs to be done, but the fact is that Melbourne’s trains have an enviable safety record. 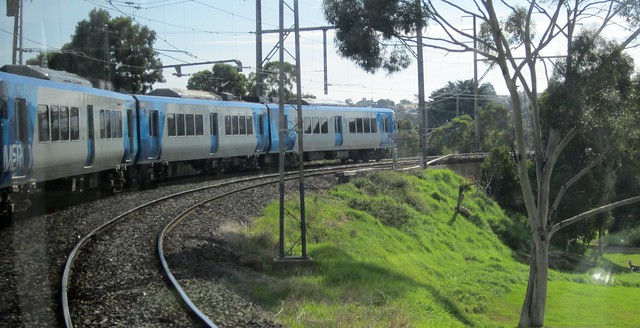 Even with Melbourne’s 170+ level crossings, as far as I can see (according to Wikipedia, which may or may not be correct) it’s been more than 60 years since the last passenger death due to an accident on the suburban system — that was near Frankston in 1946 (see comments).

It’s true that regional (V/Line) trains don’t have as good a record, thanks to accidents such as the Kerang level crossing disaster in 2007. The issue here is that the regional network has many crossings with lesser levels of protection (eg crossings with no boom gates) than in suburban areas. It would appear the last fatality caused by the railway itself (rather than a motor vehicle, as at Kerang) was in 1976 at Laverton.

Unfortunately of course, deaths on the road system are a daily event.

(The bigger safety concern on trains is that of personal safety, but that’s a subject for another day.)

The bottom line — and the statistics back this up — is that you are much, much, much more safe in a train than on the road.

Which is little comfort to those involved in Saturday’s accident of course.

12 replies on “Feel unsafe on the train? You shouldn’t.”

I’m genuinely *astonighed* that the level of confidence in the suburban railway system’s saefty is as low as that.

As you say, compared to road traffic, the statistics are infinitesimally small. Like air travel, though, one “big” (or more correctly “dramatic” and “newsworthily photogenic”) incident grabs headlines.

Is “The ALCAM level crossing,,,, ” hyperlink actually supposed to be linking to something ? Because it appears not to.

The thing that is slightly curious about the coverage of this event, and the statistical record, is that nothing was mentioned about the number of people run over by trains.

@enno, the link works for me. Have checked in multiple browsers. What are you using?

> It would appear the last fatality caused by the railway itself (rather than a motor vehicle, as at Kerang) was in 1976 at Laverton

Don’t want to nitpick too much, but one could perhaps argue that the death of the car driver at the level crossing, as a result of the 1995 derailment of the V/Line (or WCR) pass at Werribee, was caused by the railway itself?

Or are we specifically referring to the last fatality caused by the railway to a pax on the train itself?

What are the odds the majority of people who voted NO were actually feeling unsafe because of their fellow passengers, and not influenced in any way by the recent crash?

To be honest it isn’t the trains and collisions that worry me, it’s the people on the train that scare the hell out of me.

@ John Ginno – that proposal has been in place since the 1990’s, even before the roundabout with Pound Road/South Gippsland Hwy was removed and replaced with lights (Pound Road itself has also since been upgraded at the freeway) and the Cranbourne electrification.

It was intended to direct truck traffic directly to the freeway via Pond Road and presumably abolish the level crossing. Development of the site has meant the approach roads have been built but no one has funded the overpass.

In January 1946 the 4:50pm Frankston Train derailed near Wells Road due to a buckled rail, one passenger was killed.

I do agree, railways are quite safe and we haven’t killed many passengers over the years however there are a number of significant accidents where a lot of people have been injured, ie in 1987 there was a head on crash between two suburban trains at Westona resulting in 35 passengers injured.

@Chris, thanks for that. Given the info you provided, it was easy to find a newspaper article on the 1946 crash, courtesy of Trove.

Re the dodgy link:

I get a google page, something about ”

“Docs
Get stuff done, together, with apps in Google Drive”

And some urging for Google Chrome.

Poor old Mr Baxter. He got a station named after himself.

And Australia got a 2-year term on the UN Security Council. Gotta love those old newspapers.