The Siemens train seats are notorious for showing the dirt.

At one stage a multi-coloured design similar to the Comeng fleet seats was tried, but now Metro have introduced a new design which is supposedly more vandalproof (and uses their corporate design, not Connex’s).

I spotted it on Friday night but wasn’t able to get a photo, but happily Thomas on Facebook snapped one and posted it in the PTUA’s Facebook page. 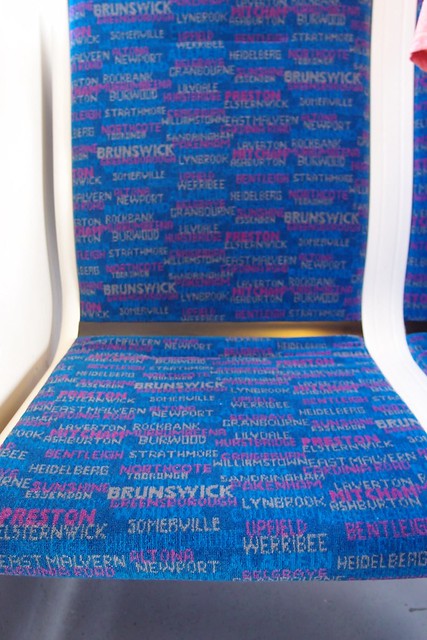 Intriguingly, as some on Facebook noted, stations that don’t get electric trains such as Rockbank and Somerville have been included in the station names shown in the design. (Somerville at least gets the Stony Point trains, which is strictly speaking a Metro service, even though it’s run using V/Line sprinters. Rockbank only gets V/Line Ballarat line trains.)

But anyway, hopefully this new design will do a better job of staying clean and hiding the dirt.

This is the kind of thing PTV and/or Metro really should promote a bit more, to let people know they’re actually acknowledging the problem, and to gather feedback.

8 replies on “Trials of new seat covers on Siemens #MetroTrains – will they hide the dirt better?”

I can’t wait for my bottom to sit on one of those!

I dunno if Metro should be promoting the fact that they’re introducing seat covers that “look cleaner”. I mean sure it’s a smart move to introduce them, but I don’t want to be reminded of the fact that the seat I’m about to sit on only hides the dirt better than the old one.

It’s good though that they’re working on this, the green seat covers look so manky and dirty, and the blue covers with the random shapes are becoming a bit old-hat.

I wonder if the new Xtraps will get this fabric instead of e Connex stuff.

When I was in London I went to the Transport museum. In the shop they had cushions made from tube seat fabric for sale ;)

This is only a trial on this 3 car set to see how it fairs with vandalism over the coming months. The seats have been replaced with the new design and the actual saloon has been cleaned with a supposed new graffiti removing substance to make them look better, tho the scratching in the panelling and glass will not be touched. In my opinion they should just get on with it and do the whole fleet of siemens as they are the most filthiest in the fleet. But no matter how much we drivers try to report the filth on these trains they never get cleaned to an acceptable standard. All i can say its about time they did this

Also the material being used doesn’t “hide” the dirt it is supposed to be designed in a way that the graffiti and dirt doesn’t attach itself to the fabric making it much easier for our underpaid and ill equipped cleaning staff to clean them. Not that I have ever actually seen them attempt to clean the seats, usually its just pick up the rubbish and a quick mop of the floor

Cloth seats are a bit more comfortable to sit on but vinyl or hard plastic seats would be much easier to keep clean with just a wipe and they would likely last longer too. The vinyl seats on the w class trams are a good example.

Brunswick’s the biggest, as it should be :)