Some people will tell you that rail lines down freeways are a great idea, because “the train overtaking cars is a great advertisement for public transport.”

Perth has done this, primarily because it’s been the easiest way of extending the train network. So the Clarkson/Joondalup and Mandurah lines both run down the middle of freeways.

And it’s long been proposed to build Melbourne’s Doncaster line this way, which I think makes a lot of sense. 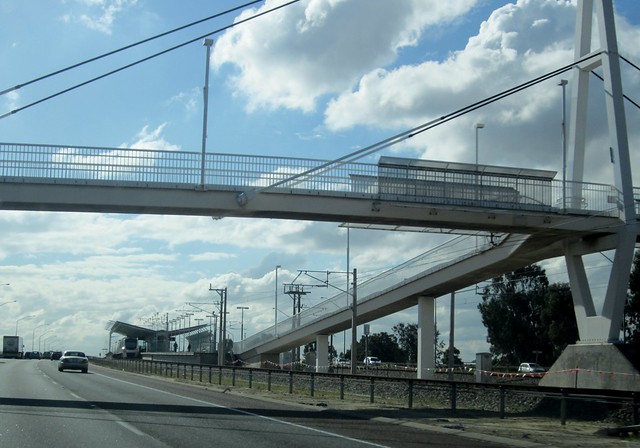 As I’ve noted in the past, you are pretty much killing off any pedestrian use into the stations… and this is actually how the bulk of people reach railway stations in Melbourne at present.

You either end up having to put in lots of car-parking (which on level ground can cost tens of thousands of dollars per space, let alone the astronomical cost of multi-storey — and severely limits your patronage, as well as denying access to those who don’t/can’t drive) or you have to bring in people by feeder bus — which needs a lot of effort/cost to make it work well.

Perth has actually made the effort to put in reasonable connecting buses at some of its stations, and (from what I saw waiting around at Murdoch in the evening peak) these are pretty well used, though the adjacent car parks were busy too.

Stations in freeway reservations are also unlikely to be destinations, because shops, universities, businesses and so on — all the things that have grown around most of Melbourne’s suburban railway stations — won’t develop. These are important to make stations and trains well-used at times other than peak, and make the whole thing more viable, by catering for more than just CBD 9-5 commuters.

It’s worth noting that the Mandurah line diverges away from the Kwinana Freeway at both ends — the CBD (at a cost as it included tunnels and two underground stations) to ensure people hopping off could walk to work, and the Mandurah end, presumably because (some) land was available and cheap, so they didn’t feel constrained to just the freeway. (That said, the Mandurah line doesn’t actually reach central Mandurah; you have to catch a bus the last little bit of the way.) 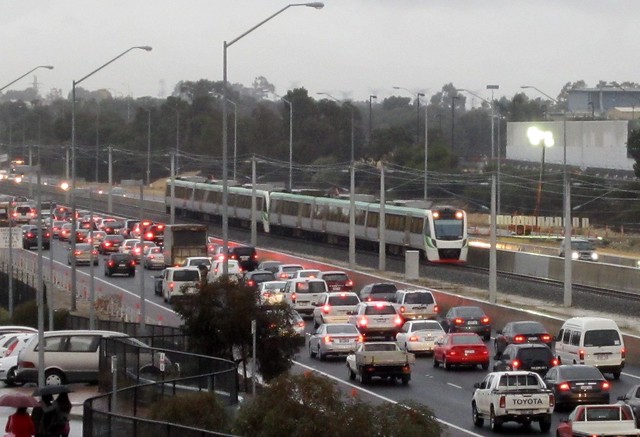 Let me tell you, it was great being in a train overtaking all the peak hour traffic on the Mandurah line. The trains were fast, frequent, and very popular.

Frankly, it was equally great being in a car in peak hour traffic being overtaken by trains.

But this only happens when the traffic is heavy. At all other times, including the peak-shoulder, trains don’t overtake cars because the traffic is moving faster.

And if you’re driving and the average speed of the train is about the same (eg car at 100 kmh versus train at 130 kmh but with regular stops) you might not see any trains in the direction you’re travelling (only in the opposite direction). Again, that’s not a great advertisement for public transport.

Don’t get me wrong — a railway line down a freeway is better than no railway line. For instance in the case of Melbourne’s Doncaster line, a very obvious easy affordable project would be a “phase 1” from Victoria Park to Bulleen, with a bus interchange at Bulleen. That would get thousands of passengers on scores of at-capacity buses out of inner-city traffic on the freeway and Hoddle Street, and encourage thousands more to get out of their cars.

But overall, down freeways is not the first choice for where you should build railways.

9 replies on “Railway lines down freeways: good idea? Only if there’s no viable alternative”

I would suggest the Perth example was largely driven by the need to quickly provide rail links to a growing city that was turning into a north-south strip development where there were only existing lines to Midland, Armadale, Fremantle (itself closed and reopened) were completely inadequate to serve.

Also note that the under-construction extension of the Joondalup line to Butler will leave the median in the other direction.

Can’t say I’m entirely convinced by the need for a Doncaster rail line; the buses are quite good and have a reasonable frequency, aren’t too slow and as far as I can tell most of the issues are on the city end, around Hoddle St and such.

Capacity on the Clifton Hill group is also a concern: platform 1 at Flinders St has an effective capacity of 20 tph with the 1 minute driver changeovers – some services are timetabled to take 7 mins from departing Jolimont to arriving at Flinders St. Although there is a small amount of spare capacity, note that Epping was the most crowded line in am peak in the last loading survey and Hurstbridge was not far behind. The now South Morang line is also a major growth area and with connections to Mernda on the books, patronage is likely to increase. Note also that the 11/112 tram which runs parallel for some distance is also among the most crowded tram lines, despite 3 min headway during peak, some of that an artifact from when the Epping line was very poorly serviced.

The section from Jolimont to Clifton Hill is also among the slowest in the network with a 55km/h line speed, and stations roughly 500m apart. With this section running at capacity, all services will have to stop all stations, not a nice ride for someone travelling 1hr+ from Hurstbridge.

So in my opinion it’s not the most important project. Doncaster is already well served by a big network of buses, including a whole heap of Smartbuses. It would be great to have a rail line there but I believe there are far better uses of money at this stage.

@Andrew, yeah as I say, it’s the way to go if there’s no viable alternative. In Perth they had to retro-fit rail lines, so down the freeway was pretty much all they could do.

@Cam, driver changeovers are likely to be moved out of FSS, making it “just another stop” (note: this is actually a little controversial), which should bring capacity up to 24 trains per hour, provided stopping patterns are standardised. Currently there’s something like 9 tph from Hurstbridge and 7 tph from South Morang, so theoretically (with some clever timetabling for the Victoria Park/Clifton Hill junctions) you should be able to add an extra to each of those and still give Doncaster 6 tph. Should be enough to run it ahead of building a Metro tunnel connection.

Yes, the area is well served by buses (apart from lack of outbound bus lanes), but these are swamped by people in peak hour, and evidently aren’t good enough to get most people out of their cars. They’re also not really an efficient way to move so many people, requiring a lot of drivers.

@ Cam – it’s worth noting the 1969-era plan (sort of) half fixed this issue with a direct branch from the City Loop and a station called ‘Fitzroy’ (unrelated to the original). It appears to a one-way tunnel operating with the direction of the Loop with the other direction being fed into the Clifton Hill line.

Yes I agree the Clifton Hill line is the all-too-often forgotten component of the Doncaster Line proposal. The combination of stoppers and expresses on this section limit its capacity along with a relatively poor alignment (hence the line speed) – all legacy of the line having been forced through in 1901 to avoid entering the city via the Inner Circle Line.

I still think it is a bit irresponsible to run a new rail line at basically full capacity. South Morang added nearly double the population of Doncaster in the space of 5 years. An extra train service at peak adds extra capacity for only 800, when those new estates open up adding tens of thousands of extra people – there won’t be capacity for them, and these new estates won’t have viable transport into the city. Is this a trade-off for an established area with the best buses in the city to have a train that goes along basically the same route with only a very minor speed increase?

I think the way Perth did new Metrorail was more or less a consequence of the type of railway they wanted to build.

They went with stop spacings of 4km or so, so from the start it was never going to be about the walk up catchement.

A more traditional railway, with stop spacings of 1km or so is good for walk up, but it comes at the expense of speed.

Personally, the most idea approach would be to deviate the line off the allignment at key centers, which is what they did at Joondalup.

Max Lay in one of his books was quite explicit about the then CRB strategy to build freeways. They would build anything they could – it didn’t matter where it was, or that it that the freeway petered out in the middle of nowhere dumping the traffic on ordinary streets. The resulting congestion simply generated political pressure to fix the problem by building the next link. Looking at the freeway network in Melbourne today, I would have to say it’s an extremely effective way of getting to your objective.

Translated to public transport, South Morang is the right way to go. Build what you can. It’s an immense success, already operating at nearly full capacity. That will build the case for extension outwards, and (eventually) to improve the capacity on the inner section. The RFR is the same – start with a simple double track line for country trains. It won’t be long (given the population increase) before there are demands for a suburban service. Doncaster would be similar. Build the section along the freeway – it’s relatively cheap. The resulting capacity problems would build pressure to extend it outwards and inwards through a tunnel. A ‘benefit’ you could sell would be to free up the bus lanes to add more car capacity for those that must drive (RACV on side?).

The thinking that any public transport solution must be the perfect solution, solving all problems, simply means that it’s hard to get anything built because of the cost.

The premise for the Joondalup and Mandurah lines is that they were designed to serve the suburbs . In that respect, in peak hours, they take off the highways 8 lanes of traffic and become an essential service to get workers to the city centre. So the railway serves this demand very well.
For off peak, the key of rail travel is reliability so as long as the trains stick to the timetable and the passengers plan to the time table it would minimise any delays. Once in the train you know you would arrive in X minutes and dont have to worry about parking. If there is a demand then the frequency should increase so you wont have to wait so long.
The other advantage of having a railway down the highway is that while a large majority want a rail station in their suburb no one wants a rail track beside their residence. having it in a freeway would reduce the impact noise and vibration would have on residential areas.
The whole system was designed like spokes in a wheel with Perth in the middle. Density is the key to TODs. For better or worst, many cities in Australia dont have the density to support a TOD. In many planning schemes TODs have been proposed to increase units and reduce parking by developers with the likely intention of maximizing profit.