All good things come to an end, and so it was with our Perth trip.

We had a sleep-in, then packed up our stuff into the car and headed out.

The flight wasn’t until lunchtime, but we had one more place to go before heading home: the boys have a strong interest in retro video gaming. (I can’t imagine where they got THAT from.) There are two retailers you can buy this kind of stuff from: Cash Converters, and a small chain called Gametraders.

So we arranged for my aunt to drive us to the only Gametraders in Western Australia, which is in a shopping centre called Centro Galleria, in the suburb of Morley, fortunately not too far from the airport. “Kate” (the name my aunt has given to her GPS unit) guided us there, and the boys had a happy time looking through the range, and buying a few ancient cartridges to play at home when they got back.

(I should note at this point that my cousin Justin also has an interest in video games, and in fact at my aunt’s house is his enviable collection, most or all of it still in boxes, in various cupboards. Very impressive.) 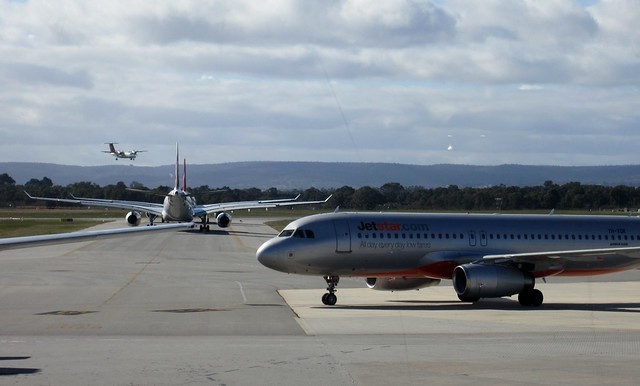 From there we headed back to the airport. I’d checked-in on my mobile phone earlier, but this time we were able to check-in our suitcase (arguably it’s quicker at your destination to leave it as hand luggage, but it’s less hassle wheeling it around the airport while you wait if it’s checked-in), and we also elected to get printed boarding passes, since on the mobile it had been a bit laborious calling up the three of them onto the screen when boarding.

While we waited we got a snack: some wedges (a reasonable-sized tray; enough for the three of us) and a drink.

Brigands! Pirates! Buccaneers! Gyroscopes! $13.70 for a bottle of water and some wedges?! #PerthAirport

I got a copy of The West Australian to read on the plane, and Qantas were giving away The Australian as well, so I had plenty to read. The flight itself was fine; no delays. 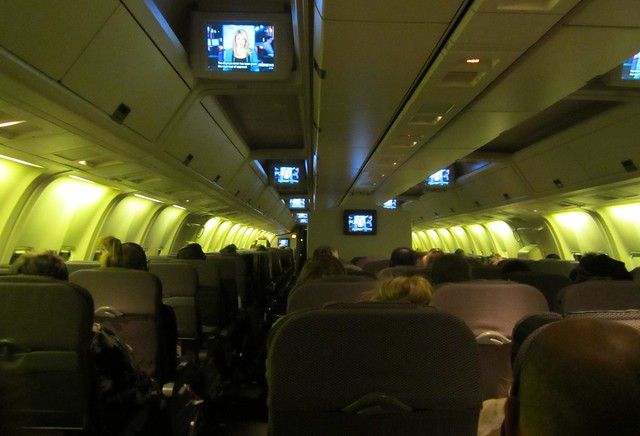 The in-flight movie was Game Change, about the 2008 US Presidential Campaign, and Sarah Palin in particular. I found it interesting, though the kids were completely bored by it. Fair enough.

After landing, we did our usual thing: luggage, Skybus, then train home. The two-hour time-difference resulted in a little jetlag, but it certainly didn’t detract from a great holiday — thanks in no small way to the extraordinary hospitality of my aunt. Thanks Aunty!

Very nice. I’ll remember your pics when I don’t get a vacation this year, again.

What was the cost of your travel home from the airport? Just would like to compare the cost of a taxi to Bentleigh versus 4? on PT…

The official taxi fare estimator says about $84 each way for that trip via taxi (up to 4 people I suppose).

The cheapest option is the using the 500 or 901 bus from the airport then a train from Broadmeadows (eg just a standard zone 1+2 fare), but this is a lot slower and services are less frequent, and the bus stop at the airport is very difficult to find.

The cheapest option would be bicycle.

Supposing one wanted to, how could you park your bike at Melbourne Airport for a few days while making a trip such as you have just made ?

Hi Daniel, Sorry I missed your trip over to WA – I just got back from overseas about the time you departed our fair State. Glad you had a great time here though.