Another in a series of posts about Perth PT and how it relates back to Melbourne.

Perth’s city centre (and town centres of Fremantle and Joondalup) have CAT buses — Central Area Transit — free services running (reasonably) frequently in loops that people can hop on, hop off to get around.

They are very popular; those I saw in Perth and Fremantle were often busy, and one Red CAT we caught in Perth got close to capacity at one point. 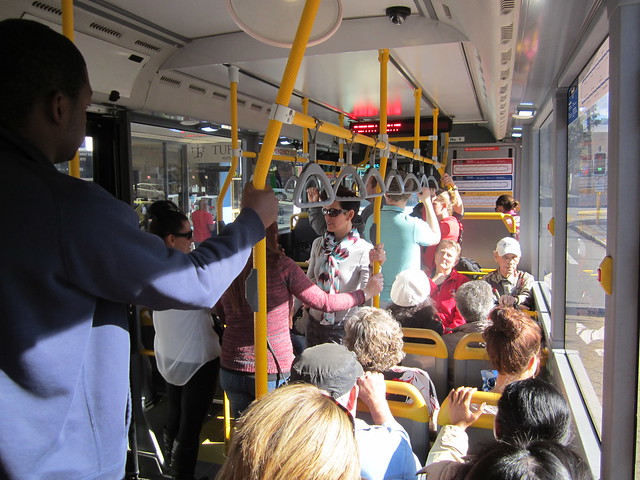 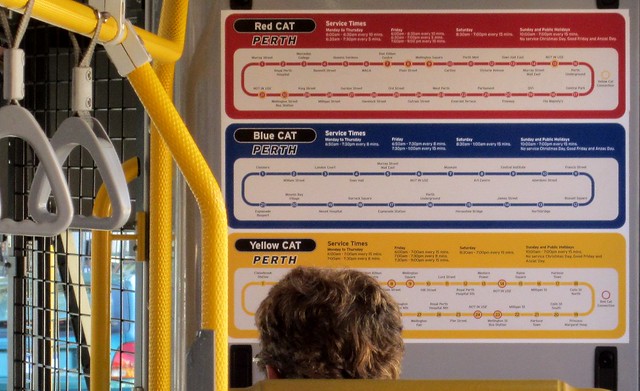 Alongside the CAT buses, central Perth also has the Free Travel Zone, which gives you free travel on any train or bus within the central area using a SmartRider card.

Those who rave about CAT buses reckon they’d be terrific in Melbourne may have missed some vital points about why Perth has them (and the FTZ):

Firstly, they are used for high-volume hop-on, hop-off trips. If the drivers had to check or sell tickets, they’d be too slow. In Melbourne this isn’t a problem, because almost all CBD travel of this kind is performed by trams, where drivers don’t have to attend to tickets.

In fact, many of Melbourne’s trams are much higher capacity than Perth’s CAT buses, the main CBD routes run more frequently (about every minute in some cases, compared to every 5 minutes for the best CAT buses), and are consistently busier. 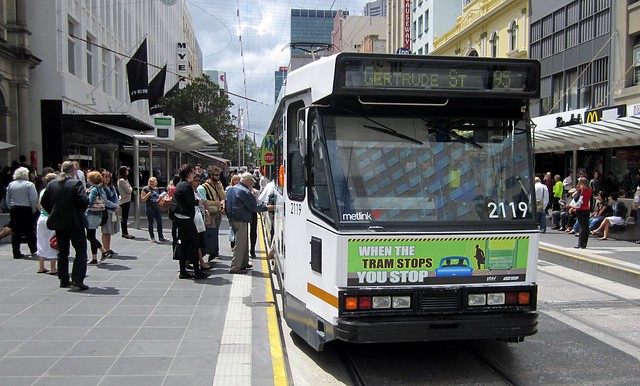 Secondly, Perth has no daily fares like Melbourne. In Melbourne a suburbs to CBD commuter or visitor pays no more than two journeys thanks to the Myki daily cap (the same applied with Metcard 10×2 hour tickets) or you use a Weekly/Monthly/Yearly Pass which includes travel all day.

So if you’re paying for your trip to and from work, then travel around the CBD at lunchtime costs no more. In Perth this doesn’t apply, unless you hit the DayRider cap — but this only applies for travel after 9am. So Perth commuters would pay extra to travel around the CBD during the day if they had no free services such as the CAT and the Free Travel Zone. 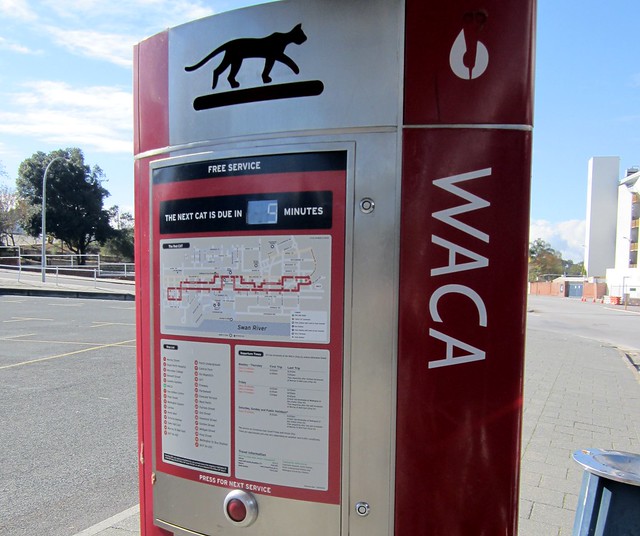 Thirdly, if as in Melbourne you can provide CBD travel which gets around the above problems, then who would benefit from providing free services? I’ll tell you who: motorists who have driven to the CBD. (Tourists benefit too, admittedly.)

Indeed, I suspect that one reason Perth retains CAT buses is because of a long tradition of welcoming motorists into the central city — the slogan at one stage was “Your car is as welcome as you are“. I think we know Melbourne’s public transport system has its faults, but frankly, motorists who have driven to the CBD don’t deserve a free ride.

Of course, Melbourne has the City Circle tram, and the Tourist Shuttle (which isn’t actually a shuttle). Doesn’t mean we need more free services though.

I’d rather see that money go towards the outer-suburban areas where most PT services are unusable.

We have a lot to learn from Perth — some ideas would work brilliantly; free CBD services aren’t one of them.

Another good summary – thanks.
Yeah, PT is non existent in outer suburbs. Almost all households have two or more cars. Instead of giving freebies to city-folk and tourists, pump more $$$ where it’s needed most.

@jon, that’s true — but are they in dire need of (more) subsidised free public transport? I’d have thought not.

Some things that are worth mentioning here, I believe the Perth CATs (not sure about Fremantle and Joondalup) are partially funded by the local council, so it’s probably not much of an option to use the funds to improve public transport out in the suburbs. Even more funding comes from the Perth parking levy (something like $600 per year per bay for each carpark larger than 5 bays if I remember correctly), which by law has to be spent on improving transport in the CBD… if it’s spent at all, which is another matter altogether.

There have been buses similar to the CATs introduced in Rockingham, Mandurah, Osborne Park and Midland, however out of those services the first three are covered by the standard Transperth fare structure and the Midland one is funded by a shopping centre as a shuttle bus.

That said, I wholly agree that just because something seems to work somewhere doesn’t mean it works everywhere else, and can certainly see the case for not needing a similar service in Melbourne.

I’m not a resident of the CBD, but I do feel that the upcoming abolition of City Saver tickets is a bit tough on them.

@Dave, perhaps another issue is that I don’t suppose State government sees any need to step in, given that the CBD isn’t exactly a hotbed of Liberal supporters such that the Libs didn’t even run a candidate in the recent by-election!

I cycle to and from work in the wastes of Dockalands, if I want to go into town at lunch time I can walk or buy a ticket.

Personal feeling is that cars should be banned from the city; Flinders – Spring – La Trobe – Spencer, encouraged to park in the surrounding inner suburbs (having facilities built for that purpose, preferably underground) and have free PT within the above boundaries. Then I’d only have to walk to Spencer St before catching a tram.

I agree that the outer suburbs need to be better serviced and that is where money should be spent.

We can all dream.

In reality the cat is only used for long city trips, like in your last photo a very common spot for Trinity students to journey to the city for most days besides Cricket or horse racing days. Other then from transport routes that the CAT link’s e.g Claisebrook to the the outskirts of Perth. There is no great demand for mid day high frequency use. The CBD of Perth itself its relatively small, thus transport shouldn’t be required. You have two legs I hope. Yes car’s are welcome, also aswell as the bicycles… 700km of dedicated bike paths have been laid.

The city CAT is mostly used for distributing public-transport users from Perth Central/Underground out through the city, rather than for motorists, I’d have thought.