After running some errands, we were dropped at Cannington Station, which unlike some of the others we’d used, is unstaffed. A small group of smoking teenagers was hanging around the station, but they didn’t get in the way of the actual passengers. I bought tickets for the kids, and pretty soon the train arrived, and zoomed us into town.

Happily the weather was much nicer than the previous evening, allowing us to explore the mall and surrounding streets a bit. Then we wandered back towards the station and caught a CAT bus for a bit of a tour of central Perth. 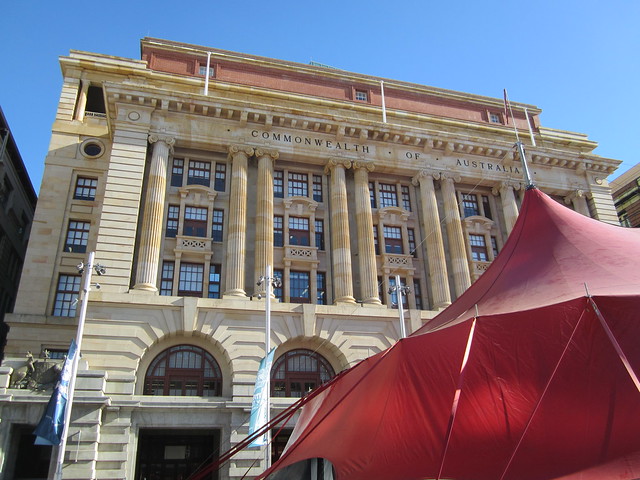 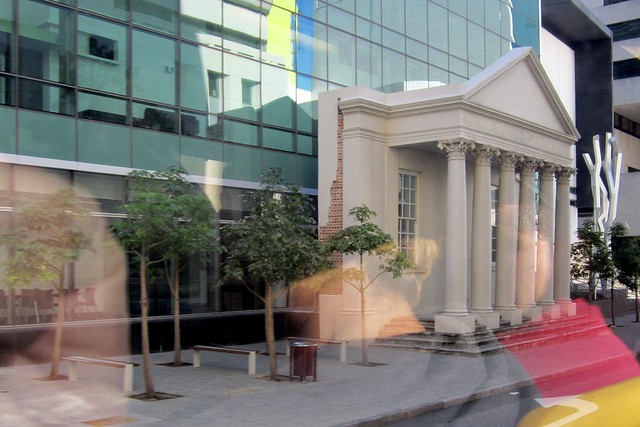 After a ride around on the CAT bus (which went from relatively empty to very very full quite rapidly) we jumped off and looked through some of the streets and arcades. It was getting on for lunchtime so we stopped in a food court and after the customary walk around the perimeter, opted for burritos from a Mexican outlet — very tasty. 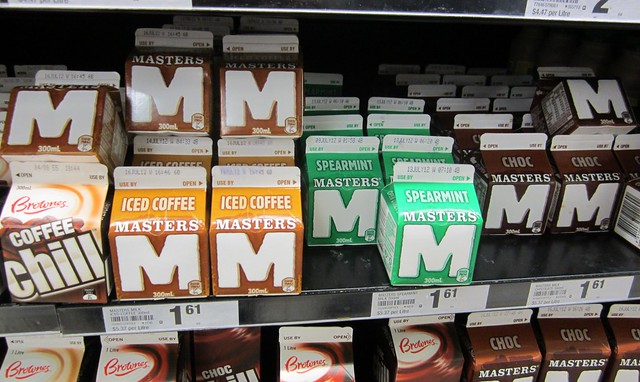 Heading vaguely towards the river, we dropped into a Woolworths supermarket. The boys were intrigued by advertising for Masters (apparently a cousin of Big M, also sporting the M logo), and in particular a flavour which I don’t believe has graced Victoria: Spearmint milk. We picked up a couple of cartons for them to glug down, and the did so. Their reaction? It’s like toothpaste… but milky. And not in a good way.

We walked via Esplanade station to the Bell tower, an odd-looking modern landmark by the river, where we’d agreed to meet my aunt.

While waiting, two cars full of oddly dressed people with wigs and make-up pulled up and asked to have their photos taken in front of the Bell Tower. Evidently they were on some kind of scavenger hunt… or they were the strangest-looking tourists ever to frequent the Perth waterfront. 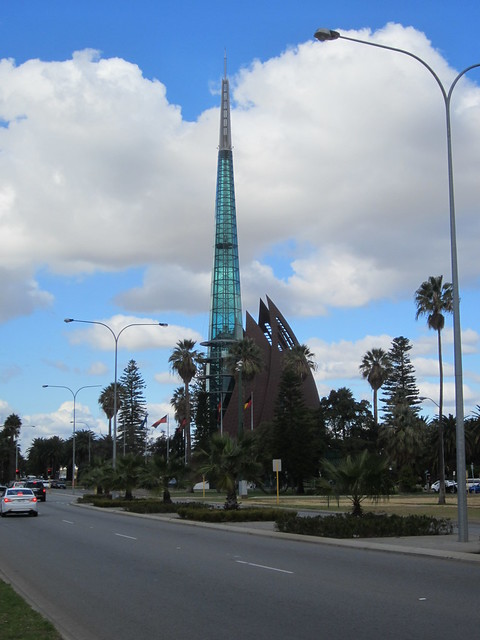 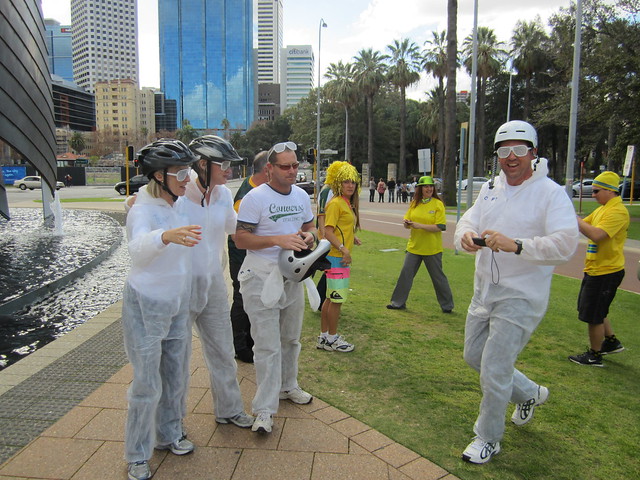 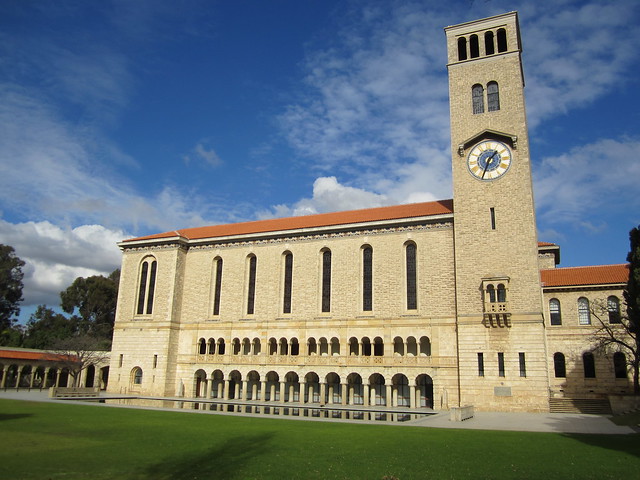 My aunt arrived in her car and we jumped in. First she took us to look around the University of Western Australia main campus. Some very impressive buildings which make it look like it was built earlier than 1911 when it was actually founded.

After that we headed north towards Whiteman Park, which is in Perth’s outer suburbs. Its distinguishing feature is that it has a narrow gauge railway (with a diesel train) and an old Melbourne tram. Both were running, and while my aunt settled down for a read of a newspaper, myself and the boys took a joyride on each. 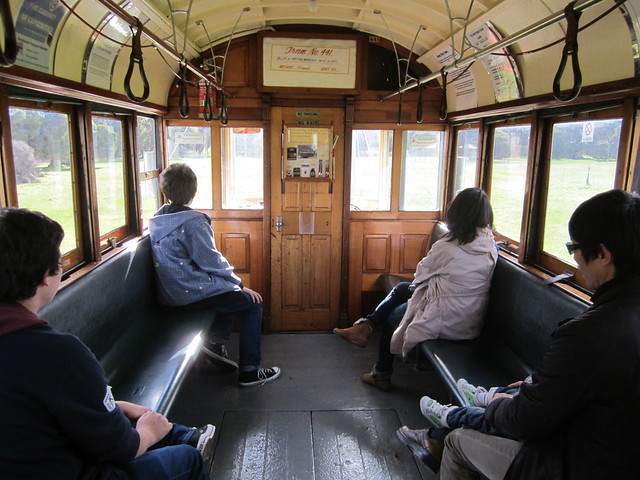 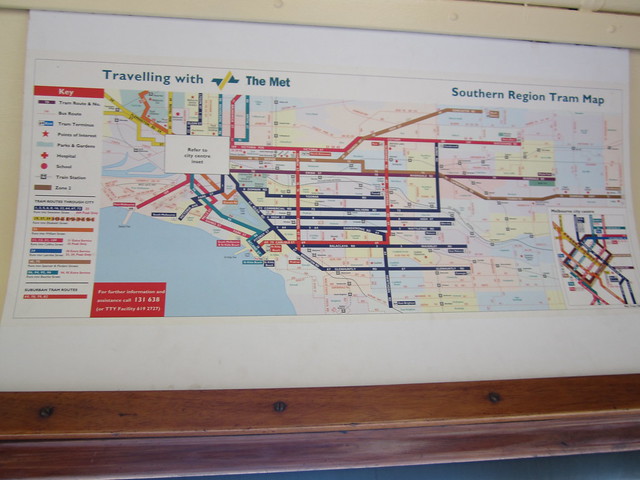 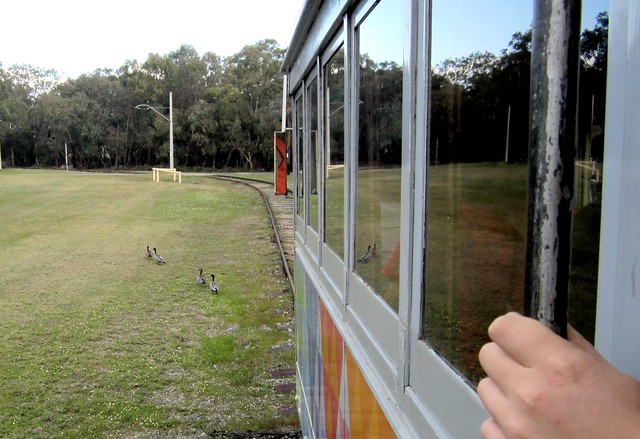 The old W-class tram got up to a fair speed — probably faster than Melbourne’s ones do these days — and amusingly had to stop at one stage and ding at a family of ducks crossing the track.

Elsewhere in the park were amusement rides, a playground, and a small transport museum called “Revolutions” (which we elected not to look inside, as we needed to move on). I had actually thought there might be a tram museum, but it looks like the workshop is not open for tours. Perhaps there were some on display in Revolutions.

Given that WA’s trams all operated on narrow gauge (like most of the trains still do) and Melbourne’s were standard gauge, I assume there’s nowhere to see actual Western Australian trams in service, which seems a shame from a heritage point of view.

After the park, we headed back to the car and headed west towards the beach for a quick stop off at the Joondalup campus of Edith Cowan University. My aunt wanted to show us the spectacular architecture — and indeed it was, in quite a different way to the UWA campus we’d seen earlier. 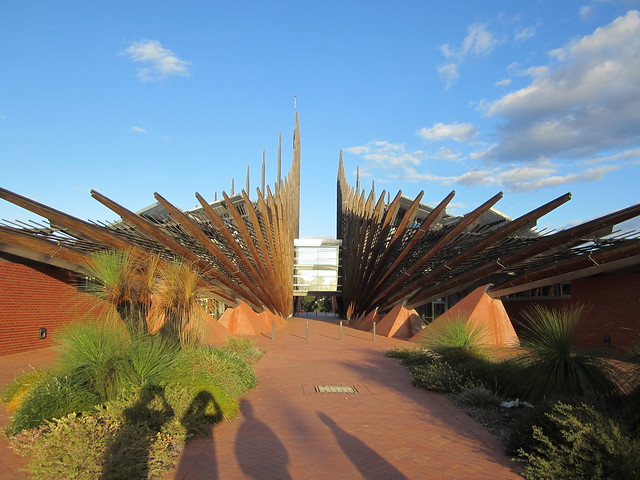 Then we headed north… well out of Perth itself, and via a road which my aunt told us is not on any GPS (Military Road; it wasn’t in Google Maps on my mobile either, though I can see it in the main web version) to the Gingin Observatory for the 6pm stargazing session. They started with a presentation, which was cut short when it was flagged that cloud was starting to come across. At that point we headed out to the observation area to look through the various telescopes they had set up.

With the lights off, it was pitch black, and only after a few minutes of becoming accustomed to the dark could we fumble our way around. Some of the views through the telescopes were very interesting — obviously it was possible to see things simply not visible to the naked eye. Perhaps most inspiring was Saturn; its rings visible through the telescope.

They also showed us Alpha Centauri — our nearest neighbour, and one of the Southern Cross pointers. Through the telescope we could see that it was in fact not one star: you can see two (though there are actually three.)

The observatory session ended about 7:30, and we drove through the dark back into Perth. Perhaps we’d underestimated the time it would take to get back — by the time we got to our intended dinner location it had shut for the night. Instead we found a Japanese restaurant to sit and eat and ponder the stars we’d seen.

Then back to base camp for a good night’s rest — in the morning we’d be heading south towards Margaret River.

Two comments come to mind here Daniel: first, I have a vague feeling that someone’s written a book about the history of Perth’s trams (and maybe trains) – I’m sure I saw it but didn’t get a chance to look at more than the cover last time I was there (in March). You can probably find someone who knows more about it than me!
Secondly, your comment about seeing Saturn at the Observatory took me RIGHT back – I remember going on a school excursion and seeing Saturn myself – um… is it bad of me to say it was probably 30-35 years ago or thereabouts?

Your travelogs are very well done. You have an excellent eye and take great accompanying photos. I’ve always wondered what Perth was like, it being almost as far from Vancouver as you can get.

The limitations of blogging are obvious; when I spotted Part 3, I had to find Part 1 and then read up. In a sense, the chronological method constrains a series like this. Even dropping this comment in here is arbitrary, but where else would it go?

Nonetheless, fully enjoying it; and noticing that everyone has jackets because it’s winter. Here we’re (relatively speaking) sweltering.

@ace, yeah the blog format makes it a tad difficult to read all the relevant posts, but if you click on the “Perth 2012” category link at the top you’ll find them all.

I remember going to FNQ and there being Blue flavoured milk in the stores. Was a butter factory in the Atherton Tablelands in Malandala.

Also WA does not really have many KFCs/Red Roosters, is all “Chicken Treat”

That top photo is curious. It doesn’t have the word “bank” in it.

Did you happen to take that Spearmint Milk photograph in the Woolies in the Mall? I discovered Spearmint milk for the first time there too. It was ok, but really needs to be choc-spearmint?

Out of interest, back when you were in Queensland did you come across the Lime flavour of Breaka Milk?

@Gavin, it was the Woolworths on St George’s Terrace. I agree; spearmint on its own is not that pleasant in a flavoured milk.

I don’t recall finding lime flavoured Breaka — didn’t think to look for the local flavours when there!

I recently dropped my N8 on the kitchen tiles and cracked the case. The nice Nokia Care folk will have to fix it for me and that’ll take … so in anticipation I bought a $30 Telstra Pre-Paid kit and reactivated my N95. They can both find Military Rd Gingin WA; the N95 on Nokia Maps and the N8 on Ovi Maps. Feels strange having them tell me it’s ~ 2,166Km away …

And thanks for the Perth trip notes. Brings back memories of my trip there in 1999. I’d love to go back. I’ve flitted in twice before but not had time for a really good look around. Those visits were when I still lived in/near Sydney and I was particularly struck by the way the WA transport folk had decided to put a fully accessible (it seemed) rail line up the middle of a Freeway! Superb! I haven’t been back the the wilds of Sydney since about 2005, but I’m sure they don’t have the room *anywhere* up there for such a neat transport structure.

@enno – re the missing ‘bank’ word – thats probably beacuse its not a Commonwealth Bank building – its the old GPO building and the reference is to the Commonwealth Government. 8^)

Daniel, – re the old Perth trams, I think the Whiteman Park tram group do have a few old examples of Perth rolling stock at their sheds at the southern end of the line (past the tram stop at Mussel Pool station – http://www.whitemanpark.com.au/visitorinformation/parkmap.aspx )
but they are in such a poor state of repair that they cannot be run on the line. I’m not sure but I think they may not even have any bogeys attached having been ‘rescued’ from old dumps or farms, etc.

More info on Perth trams and current state of resorations can be found at:
http://www.pets.org.au/

Hmm, ok, Andrew, interesting to know…
I guess 100 years ago there was a secessionist movement in W.A. and the Federal Government put up that extravagant building to make a good impression.
The Federal Government never put up anything like that in Sydney, but the Commonwealth Bank did.