As if disrupted trains weren’t enough, now we have Metro apostrophe crimes. 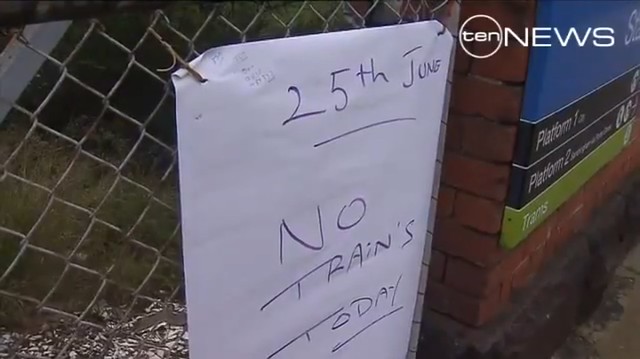 Metro was already having a bad Monday morning peak with the inner part of the Sandringham line suspended due to a maintenance train derailing overnight. Things didn’t improve when at about 7:15 the outer section of the Cranbourne line also went down, and it just got worse when at 8:10 a train caused an overhead power fault at Caulfield. By 8:40, they were evacuating that train and others, as these snaps I grabbed from a passing Frankston line train show: 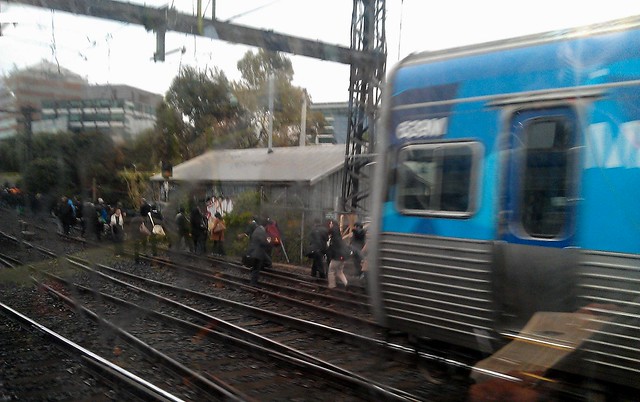 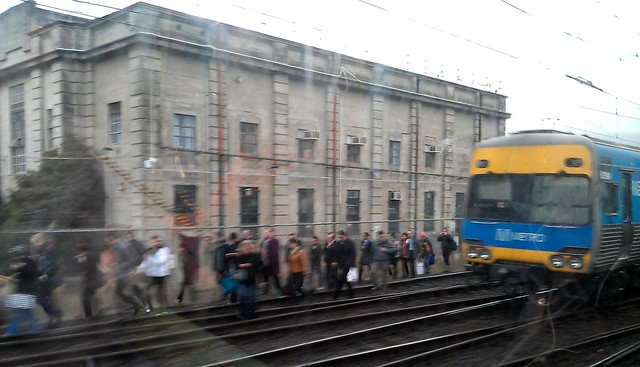 They weren’t the best pictures, but thanks to Twitter, what they did do was alert journalists that there was a major disruption emerging at Caulfield. The second pic got picked up by The Age, though far better was a pic and video shot by Gavin Tan on Twitter:

Now, the maintenance train derailing on the Sandringham line could be just bad luck. Metro are pointing at vandalism for the Caulfield problem. And the Cranbourne issue (which seemed to recur on Monday afternoon)? We don’t know.

But it all underscores just how fragile and troubleprone the rail network continues to be.

The last state election was won and lost on public transport — both sides said so.

6 replies on “Metro apostrophe crimes! (and will the next state election again swing on PT?)”

Good coverage above and on the news last night. You were quoted widely and sounded sensible as usual.
Yesterday, I caught the 600 bus from Brighton Beach to StKilda then the light rail to get into the city. Took 40 mins longer than normal, but was better option than “railway bus”.

Interesting that Metro evacuated the train, since when do they ever do that? I’ve always thought they never let people out due to safety reasons.

In any case I’m glad that they do have the sense to let people out when it’s safe, instead of trapping them for hours.

What surprised me about this, is that they let people get off the train, instead of holding them hostage for five hours.

I actually agree with them letting them off the train, but I find it surprising that Metro’s lawyers think so.

Metro and Yarra Trams conspired to make things difficult for people going to the Community Cup at Elsternwick Park on Sunday also. They still got 9000 people, but some people didn’t get there until late. Last year the trains were also out on the Sandringham line, but the trams were running the right way. Should be one or the other not both.

It’s absurd when Metro and Yarra Trams both decide maintenance should be done on routes that run parallel at any time, and it really highlights the lack of strategic management needed at a network wide level. It’s absurd when they decide maintenance needs to be done on the day of a major event, on routes that serve the event. It’s doubly absurd when they combine the two! Needless to say, it really shitted off that they’d managed to screw over the community cup so badly over the weekend, especially when the event is such a great fundraiser for something so important to the community.