It used to be that on the weekends, trips by car could safely be assumed to be faster than those on public transport, particularly crosstown trips that required a change of service to complete.

I’m not sure that’s always the case anymore. Over the weekend I took two crosstown train trips: Bentleigh to North Coburg (the superbly-named Batman, to be precise) on Saturday night, and Footscray back to Bentleigh on Sunday afternoon. 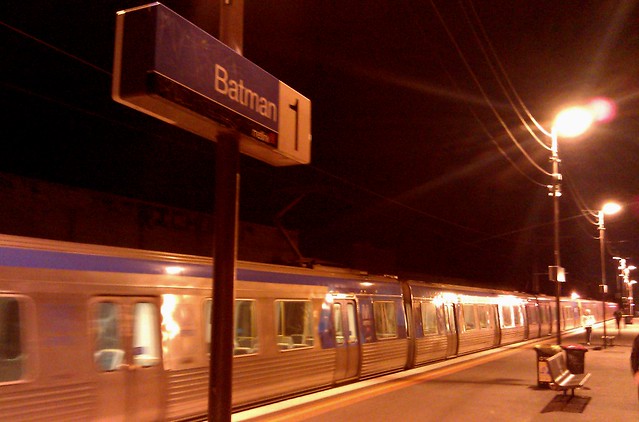 Frequent (10 minute) services meant the connection times in both cases were only a few minutes. (The Upfield line out to Batman is only every 20 minutes, but thanks to the Frankston line inbound running every 10, I was able to time my journey to minimise the connection time in the city.)

So how did the journey times compare to driving? Ignoring for a moment the trip to/from the station, pretty well actually.

(The driving times are estimated from Google Maps, using the times with traffic, rather than the hopelessly optimistic default estimates. Based on my previous driving trips, they’re pretty good guesses I think.

The train times are based on the timetables, which are theoretical, but in fact on both of these trips on the weekend, the trains were dead on time.)

For Bentleigh to Batman, the time was comparable. While the average speed in the car is expected to be higher, the route bypassing the city is longer.

Footscray to Bentleigh, train actually beats car, despite the distance in the car being slightly shorter.

Despite the length of the trip, both these journeys fell within zone 1, which for me is included with my Yearly Pass. Otherwise, the cost (on Myki) would be $3.28 for a single trip. A return/day trip, on a weekday would be $6.56, but on a weekend or public holiday, you get a day’s travel in both zones for $3.30. Bargain.

Using an estimate of 10 kms per litre of petrol, and a rough figure of $1.40 per litre, the trip to Batman would have been $4.52 — more expensive than the train. Add the Citylink toll of $6.31 and it’s $10.83, or about three times the cost of the train trip. Avoiding tolls would blow out the trip time by about another third.

The trip from Footscray back to Bentleigh would be $3.00 in petrol. Adding the $2.43 toll makes it $5.43, though the speed advantage from paying the toll is negligible in this case — driving instead via King Street would probably only add a few minutes to the journey, and save almost half the cost.

Obviously in the case of the train, you need to pay a fare per person, whereas in the car you can fit a few passengers. But the car costs here exclude the standing costs such as registration, insurance and wear-and-tear/maintenance — these are difficult to calculate for individual trips.

And of course, on the train, I was able to read the newspaper and play with my phone.

The importance of high frequency

High frequencies make all the difference. In both these cases, the train connections in the city were just a few minutes — but if all services ran to the old 20 minute frequencies, the connection time would blow out the total trip time. A missed or badly timed connection could easily result in having to wait nearly 20 minutes.

Incredibly there’s been no promotion, but for those aware of them, the ten minute services are making a really positive difference to the experience of using public transport.

As one (envious) wit remarked:

trains every ten minutes is in a land I go to in my head. My happy place where there are unicorns and rainbows.

Politically, whichever party pledges to rollout higher frequencies onto the rest of the rail network, as well as trams and major/Smart bus routes, seven days-a-week, will be onto a winner at the next election.

PS. The beauty of higher frequencies is that outside peak hour, they can be achieved mostly by using the already-available fleet and infrastructure — no huge capital investment, it’s just additional running costs.

While the train services are great, it’s a bit disappointing to see (what seems like) less attention given to trams. With many key tram roads also shopping centres, the heavy weekend congestion slows them right down, without the benefit of weekday peak tram-only lanes.

The improvement to train frequency is great, though.

Bring on more every 10 minutes!

1. I think that many of those major shopping strips with trams should have the cars banned from them and the footpaths widened.

There should be more tolling of freeways and other arterial roads. King St/the CBD would be a prime candidate for a toll.

When do they do maintenance on the lines in Melbourne? In Sydney ist not uncommon for the train lines to be shutdown on the weekends. The last two weekends had many lines down for maintenance. They have bus replacements. But if I have to sit in traffic I’d rather take my own car.

I find it hard to believe that on a sunday it takes 49 minutes from Bentleigh to Batman.

Yes, bring on the every 10 minutes, but extend that to late night services right up until ‘last train’. The city can be just as congested traffic wise at 1AM on Friday/Saturday and even sunday night than it is during the day. Ultimately, even running a service at 2AM or such would be very good, given that most music gigs etc don’t end up finishing till at least 12:50AM…but I doubt the government would extend to such a time… perhaps they think everyone should be tucked up in bed at that time??

@John, I agree about late night services. My last tram home leaves flinders st at about 1:52am on Friday/Saturday… this is awesome and should be more widespread. Late night trams are always packed.

A big priority should also shorter, orbital trips; which, especially on weekends, are not at all competitive with driving. A pretty standard trip from Preston to Heidelberg takes 41 mins by train, not including an up to 20 minute wait at Preston. On the 903, from Murray Rd, the trip takes some 31 minutes with an up to 30 min wait. On the 513 bus along Bell St, it is a much more bearable 14 min trip but with painful 40 minute frequencies. No wonder many simply choose to drive.

10 minutes works on the weekends for the lines that have it . I have seen trains pretty full by the time they get to the city. It is standing room only a lot of times on the Belgrave/Lilydale lines on a weekday to well past Box Hill. I was on the train from Belgrave to Genferrie last Saturday from about 5:30 to 6:30 and when I got off it was very full.

I just am not sure that it would be economically feasible on the shorter lines because Metro has to make more money than the cost of every driver that that works overtime or they have to hire to facilitate it. They can use 3 car trains on some lines that have lower demand but that saves them only upkeep and the cost of electricity.

I would say to make the Glen Waverley and Sandy lines run at 15 minute intervals to start on the weekends and all lines should at least run 20 minutes to last train every day. That matches their off peak weekday frequencies. Also the city loop can only handle so much and some lines won’t be able to go through it on the weekends confusing casual users which are more likely to use the train on the weekends.

Also make the Saturday and Sunday timetables match for every service, possibly start Sunday an hour later and end it an hour earlier but the timetable should be at same frequencies and times. This is done much better for the trains that the trams and buses.

@flerdle – very good point about the trams. Even if there is the excuse of ‘maintenance’ etc, i’m sure this wouldn’t have to happen daily. Even a good bus replacement service would be good in cases where they had to close a line for say 2AM train services… and Nightrider isn’t a good substitute – certainty not at its current frequency or limited routes.

More frequent weekend services are great but personally I’d prefer more frequent services after 7pm. 30 min waits on the Frankston line sux on a cold evening, especially as there are no loop trains and the wait is either at Richmond out Caulfield!

At least for some proportion of the Upfield line, the tram serves as a fill-in if you happen to miss the train by up to, say, six or seven minutes.

Batman is probably a bit far for it to be effective, but for anywhere from Jewell to Anstey, both lines together give a vague impression of a frequent service.

@Paul – I agree. it’s only a useful trick though because the wait between trains is 20 minutes, or 30 at night. The trams and their easing effect on train patronage are undoubtably being taken into account in order to justify leaving the services at so infrequent a level. And the trams are always full at night time. The 1/8 are similar.

I’ve found that, from Moreland station during the day, if you just miss the train, then if you _don’t_ catch a tram within a few minutes of getting to Sydney Rd, then you might as well wait for another train (in 20 minutes) because the next tram, even though it’s only 6 or so minutes away, will take at least as long to get to the city (depending on traffic). But you have to trust that the next train will actually turn up. And going outwards, if you manage to coordinate with a 19 in the same fashion it works; if there’s too long a wait, it doesn’t. Extend this by 5 minutes or so late at night due to the 30 minute gap. Numerous times i’ve missed a train, caught the next tram, and seen the train I would otherwise have waited for, coming as I cross the line at my station!

So yes, I would say that it works if you come/go from somewhere between Jewell and Anstey, but beyond that it becomes less useful. Of course, heavy traffic along Sydney Rd, which these days is most of Saturday and Sunday, makes it less of a neat trick.

That said, if you needed to get to Batman and you’ve just missed the last train on Friday or Saturday, the 19 will do the trick, as it goes beyond, to halfway between Batman and Merlynston, and it runs 6-13 minutes later than the last train.