With little fanfare, there was a change last year to the ticketing rules that appear to allow Myki cards to be shared, so that for instance you can keep one at home to lend to visitors from interstate or overseas, or a company office can keep one handy to lend to employees who don’t use PT.

It doesn’t mean you can let multiple people use a single “fare product”, such as a Myki Pass, but for instance a single card with Myki Money on it can be used by different people on different days. At least, that’s my interpretation of it:

If a myki that is not registered does not have a myki pass loaded on it, any person lawfully in possession of the myki may use it for a journey or an entry to a designated area.

It also talks about a Registered Myki being able to be used by others, with the consent of the registered cardholder.

So it’s now a little closer to may be common practice anyway (though note it specifically prohibits the equivalent of a regular commuter lending a colleague their Monthly Pass to a colleague for a lunchtime tram ride — this has long been effectively outlawed).

This is all in the Government Gazette, or page 87 of the Fares and Ticketing Manual, but as far as I know hasn’t been explained in plain English to anybody anywhere — let alone announced or promoted in any way — despite it being of intense interest given the removal of Metcard and all short-term ticket options. 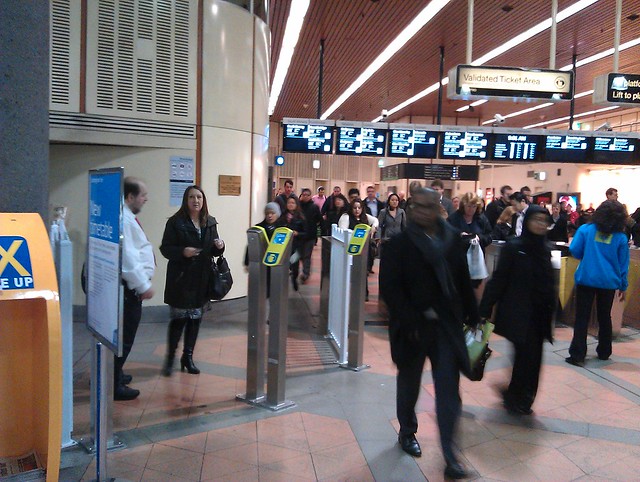 Those watching such things may be interested to know that standalone readers to work as overflow for the fare gates are now in use during morning peak at Flagstaff.

19 replies on “Myki cards can (sometimes) be shared”

That doesn’t matter, because just about everybody who has a Myki will be of the opinion that of course they can share it with anyone they choose. That’s logical, fair and reasonable. That it was banned by the overly complicated rules in the first place is just evidence that the rules were ill-considered.

If I had a monthly Metcard and wasn’t using it on a particular day, of course I’d lend it to a family member if they wanted to use it. I’d do the same with Myki. (I would not, however, lend a concession metcard/myki to a non-concession card holder.)

I’ve always assumed that the complex fare rules in Melbourne were responsible for the incredibly high cost of Myki to begin with. Simplify the rules and price structure and get a simple ticketing system. People would not feel the need to share their tickets if the systems and pricing was clear and easy. Octopus and Oyster ticketing systems are straight forward and logical to me when I’ve used them as an outsider. Myki is not and I’m a local. Myki broke one of the original rules in implementing new systems – “it has to be at least as good as the old one” from a usability aspect or the users will rebel.

P.S. I wonder how the people who registered “vanity card” names on their Myki go when they get checked and the inspectors realise they’re not “Michael Jackson” or “Kofi Annan”.

Adrian, highly doubtful. The simplest (well, next to simplest) and the most complex pricing systems aren’t that different. They take as input geographic location, time, date, previous travel and run it into a pricing function. Any competent programmer could write all the rules in a week or two (which is not to say they can’t screw it up, but mistakes because of input failure are more likely than failure of calculation).

Interesting post, thanks DB. My wife worked from home the other day, she has a yearly myki pass and, because my usage is fairly erratic, I’m still on the 5 x daily Metcard and that can often last me three weeks.

I used my wife’s pass for that day, but I have no idea if that was technically allowed – what constitutes ‘consent’ of the card holder? I made her a nice cup of tea in bed before lifting the card from her purse (with permission of course) and heading off to the station. Does that count?! :)

The way I see it, that journey was paid for whether I took it or not. No one loses because I touched on and off that day instead of my wife. Metro already has my money for the trips I haven’t taken yet anyway. We have a joint account; I paid towards that card, and should be able to use it whenever it is valid for the possessor of that card to be using it. I suspect Metro has no incentive to market myki as a shareable service, even though it has received the full face value of the advertised transaction regardless of what happens next.

That photo captures my pet hate about Flagstaff. Why is that ‘Validated Ticket Area’ box sign still there, hanging down with the other relics, blocking the view of what customers actually need to see – the platform, arrival and delay info?

@Adrian, @Russ, yeah the main difference we have here is timed tickets. London/Oyster for instance does deal with zones and different modes.

You can argue that the journey was paid anyway, but if you’d bought your own fare obviously it would have been more revenue.

Note: Metro does not have responsibility for Myki.

Thanks Daniel. So can I lend my myki (with my name printed on it) to a female friend to use? I have only myki $ on it. what happens if a ticket inspector says “You obviously aren’t Roger?”

@Roger, in most cases AOs wouldn’t even look at the name. But in any case, what I was told was the name and even who it’s registered to is irrelevant for the purposes of travel.

A few years ago a family friend borrowed his girlfriends yearly metcard while she was on holidays (or vis-versa). He was picked up in the city and taken to court for using it incorrectly. Even though it was fully paid and it was being used by one person (with consent) it still wasn’t allowed. I hadassumed this will be the same with the Myki passes (i.e replacements for monthly/yearly tickets). If it isn’t this will be fantastic.

@Rhiannon, no, the law specifically says a Myki Pass cannot be shared.

Years ago in sydney, they used to use a rubber stamp to stamp the week numbers and a big F or M on weekly tickets. So you could lend your weekly ticket to somebody else on the weekend, but only if they were the same gender.
There would probably be a lawsuit if they did that now.

Rhiannon, I’m interested in how he actually got caught out using it? I always thought it was one of those things where it was against the rules, but impossible to enforce or prove it.

This is one of the reasons I refuse to register my myki. My partner and I both use monthly myki passes. At one point, she lost her wallet and was able to borrow my myki to travel to an appointment (she found her wallet later that day and was happy not to have wasted $16 on buying and topping up a new myki).

If an authorised officer had checked the myki my partner was travelling on, they would have had no way of knowing that it wasn’t hers. Which is as it should be, because she had already paid for the trip, albeit on a different myki.

Just wondering. If the rules state a myki pass can’t be shared, but an unregistered myki does not have a specific owner. Is this rule unenforceable?

@enno, I recall buying a daily ticket in Edinburgh which had the gender marked on it. I guess it stopped 50ish% of the population from re-using it.

@Papers, my understanding is that AOs do not have access to Myki card registration information. Even then, they would not know that a card owned by X hadn’t had a Pass paid for and exclusively used by Y on it. (Obviously any imprinted name on the Myki card is a separate issue.)

@Bnic, that’s two separate questions! The Pass on a Myki card (whether or not it is unregistered) is only meant to be used by one person; the first person who used it. That’s what the law says. Is it enforceable? Again, whether or not it’s registered, probably not.

Here’s another thought – I have myki money on my pass – printed with my name. I can give the myki to another person (different gender) to use. Said person buys a myki pass with the money in the card. What happens then?

As for the second person loading a Pass onto the card, my reading of it is that’s fine – as long as only that one person uses the card for the duration of the Pass.

Ah, yes. I did mean myki money on my card.

And thanks for clearing the “sharing” terms. I had loaded money onto the card awhile ago with the thought that I was going to rely more on public transport, but due to the unreliability of my line, have avoided PT. I thought that refunds would be too much of a hassel so thought I would give the card to someone else to use :)