The other thing that’s become apparent from the Travel Demand document is how the Regional Rail Link (and the other V/Line routes) could work.

Frankly it’s a relief they have some idea of how RRL would run, as so far they’ve been unwilling or unable to articulate what type of services will use the new line, which is pretty poor considering it’s costing them billions of dollars to build. 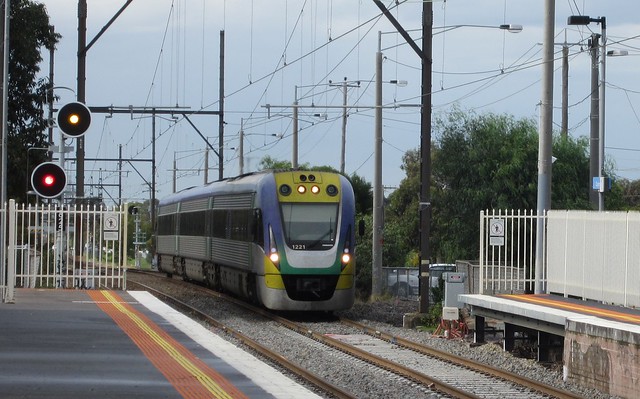 Caveat: this information from the document is a 2021 plan based on current and confirmed infrastructure. Doesn’t mean the funding for service upgrades will eventuate, or that they’ll be in place as soon as the Regional Rail Link project is completed in 2014ish.

Also: it appears that longer distance trains are not included here, and would be in addition to those listed below. And note that the stops on the electrified network are annotated as being “set down only” (inbound).

And I must emphasise that the below descriptions are my interpretation of the document, and are not guaranteed accurate. (eg I might have messed something up.)

In the inter-peak hours you’d have:

So in off-peak hours, a big upgrade from today’s hourly service — close to a suburban level of service, in fact — just as well because it includes the new suburbs of Tarneit and Wyndham Vale. A train every 15 minutes is not too bad for those areas (but of course for it to be workable there needs to be frequent connecting buses for those not lucky enough to be close to the two new stations).

What’s less clear is how the longer route will impact on travel times. Potentially the expresses could move through the new line at up to 160 kmh, with probably closer to 80 kmh on the inner-suburban section. That could overall be as about quick as the existing route, but it’s not really clear if this will be possible given the operating patterns and other constraints.

No hint as to what will be provided for the current people travelling between Werribee and Geelong, though some kind of shuttle bus from Werribee to Wyndham Vale has been mooted in the past. For some (eg between Geelong and the Newport and the Altona area) it might be easier to double-back via Footscray.

And of course the other issue worth pondering is if Tarneit and Wyndham Vale boom, will we have the same problems there that we currently have at Sunbury — suburban loads trying to fit into regional/long distance services? RRL apparently includes provision for additional electrified tracks, but it’s unclear if these would ever be funded for construction.

Not terribly ambitious, but a half-hourly service to the western suburbs such as Melton and Deer Park, Ardeer would be a big improvement over the service there now, which is roughly every two hours in some cases.

But what would you do if you want to travel between Ballarat and Melton?

It’s not clear how many trains would originate at Wendouree.

Bearing in mind the Sunbury line will be electrified by this point, in peak hour:

An hourly service outside peak is not great. At least the addition of Sunbury to the suburban network should see the end of trains that are crowded between the City and Sunbury, but relatively empty further out.

It’s not clear how many trains would originate at Eaglehawk.

Thoroughly unambitious; roughly the same as now. And why no stop at Clayton (or even better, given the 601 bus now in service) Huntingdale for Monash University?

Note it says these trains would terminate at Flinders Street, presumably to reduce congestion on the viaduct to Southern Cross, as well as avoid terminating trains there, using up limited platform capacity… at the cost of regional travellers needing to change trains to reach Southern Cross.

Interchange at Richmond and North Melbourne

We already know that trains using the Regional Rail Link lines (Geelong, Ballarat, Bendigo) will not have interchange at North Melbourne, because someone’s decided that having spent a bazillion dollars on the project, they can’t spend a little more and do it properly, with platforms to serve this major interchange.

It also appears (from the document at least) that the Gippsland line will not stop at Richmond.

It’s unclear what passengers requiring interchange from suburban lines or the City Loop will do. Depending on how the Loop operates (and the document provides some clues on this too), it could be okay, or it could make life very difficult for some.

Already it’s an issue for people from the northern/western suburbs on weekends, for instance, who have to catch a suburban train that goes all the way around the Loop before arriving at Southern Cross, because V/Line trains don’t stop at North Melbourne on weekends.

One can only hope they’re looking at this carefully, and will provide interchange opportunities where they’re needed.

8 replies on “V/Line’s possible timetables circa 2021”

I see that Rockbank Station is mysteriously missing from the Ballarat line stopping patterns.

@Somebody, that’s my mistake, I missed it. The original source document just says “stopping all stations”. Will add Rockbank in, thanks.

no mention of a rail link to Avalon? Do you think that will ever happen? Why cant we get the sydney monorail they are pulling down and use that? Also I thought the Geelong line would bypass wyndham vale and tarneit and metro would service that? but thats not the case, it will be vline?

What are the stats on Gippsland passengers needing to get to Southern Cross? FSS direct is good enough for a bunch of suburban lines with a transfer if needed (easy enough to get to FSS Platform 1, or others).

If 90% want to go to Southern Cross – ok, a good case, but if the majority are disembarking at Flinders anyway, the benefits of going on to Southern Cross may not outweigh the negatives you’ve mentioned (viaduct congestion, etc).

My only concern with terminating Traralgon services at Flinders Street would be where? Can Metro afford to lose a platform or two waiting for the V/Line service to turnaround and return to Traralgon?

Bairnsdale services would almost have to start out of Southern Cross, by virtue of them being loco hauled; can’t see a runaround being easy at Flinders Street! Nor is there provision for catering stock to be loaded etc.

Though, I guess the option is always there to originate/terminate them at Flinders Street and run empty to/from South Kensington/Geelong as per current with no stop at Southern Cross.

Does that mean the RRL will be the first line with no level crossings? There are none between Sunshine and Southern Cross (Both crossings on Anderson road have been funded and included with RRL works).

@Jon, according to the Melway, there are level crossings at Robinsons Road and Station Road in Deer Park, and Fitzgerald Road, Sunshine West.

I can confirm there are indeed level crossings at Robinsons Rd and Station/Mt Derrimut Rd. Trust me, as a frequent driver on theses roads, when I say it seems we have a much more frequent time table than we actually do.