Where digital TV really fails is handling lots and lots of moving objects on screen at once.

Look at these two grabs from last night’s ABC news. In the first, host Ian Henderson is shown. With little moving, the picture is very smooth — even with the slightly dodgy ABC blue screen. 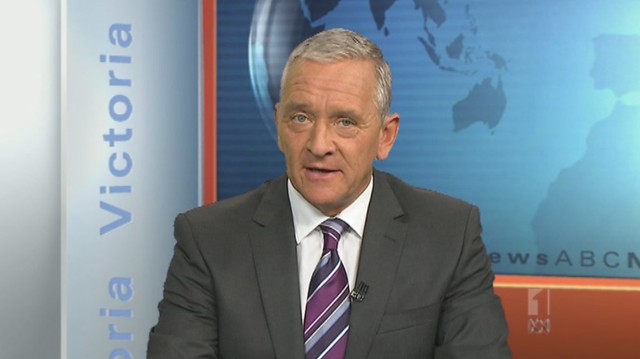 Now look at the second grab a few seconds later. It’s library footage of Melbourne Storm’s premiership win a few years ago. Tickertape stuff is going everywhere, it’s probably been grabbed in turn off a Channel 9 transmission and reprocessed, and the picture looks like crap. 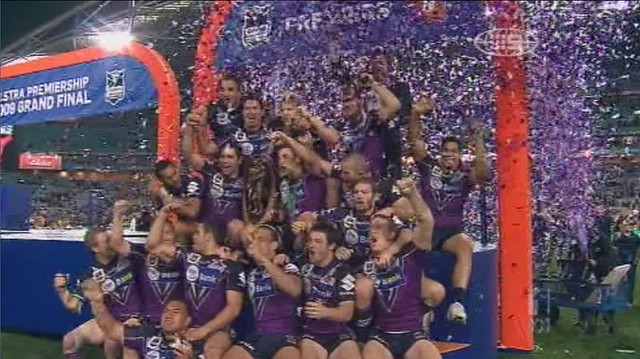 Admittedly it doesn’t look quite so bad when viewing the footage, as so much is moving around that the eye doesn’t really notice the artefacts as much. But this is once instance where I suspect analogue would actually look much better.

10 replies on “Digital TV can sometimes look like crap”

Rugby looks crap no matter how you see it.

Without wanting to get too technical, the compression used for digital broadcasts works better the less movement there is on the screen.

A shot of a newsreader changes little, 80% of the image will stay the same through because they are just talking and looking directly at the camera.

Contrast this with the confetti in the NRL clip which is constantly fluttering around and playing havoc with the compression. It’s also possible that the file footage has been upscaled from 480p to the ABC’s HD broadcast resolution.

Still, I’m not sure it would look better on analogue…

I had terrible reception on ABC1 last night – far worse than usual.

It may have been the weather.

if the ABC have grabbed that from transmitted Channel 9 DTVB signal and re-broadcast the footage, it will probably be suffering from a second round of compression artifacts as well …

Depending where I am I either watch digital tv on a CRT through a set top box or straight analogue tv. For me it’s a no-brainer, digital tv sucks, there isn’t a five minute period whilst watching a digital telecast when there isn’t picture breakup of one sort or another, always minor but enough to be noticeable and annoying. And the other night Liege – Bastogne – Liege it was atrocious with total screen disruption and at the most critical stage of the telecast the picture was undecipherable for over 10 minutes.

Digital tvs suffer abysmal refresh rates which leads to picture flicker/strobing, I think the image capture technology is also a contributing factor here as it is still a long way from being able to handle action sports like football, rugby or cycling,

@Nigel, “there isn’t a five minute period whilst watching a digital telecast when there isn’t picture breakup of one sort or another” — sounds like your antenna might need upgrading.

Actually pretty much every new TV has a refresh rate far higher than what is broadcast, and certainly higher than CRTs. CRTs usually operate at 50 or 60Hz by interlacing. Pretty much every LCD, LED, Plasma etc now on the market is operating at 120Hz, or even 240Hz.

The difference is that LEDs, LCDs, etc don’t interlace in the same way as CRT TVs, which means they can look shoddy, but that’s a problem associated with poor conversions, not inherent with newer TVs themselves. When everything was first switching to digital a lot of broadcasts suffered these problems. Now, not so much. Also, if you’ve got a decent LED, LCD, Plasma, etc it’ll blend the frame beforehand and afterwards which can reduce flickr/strobing just as well as interlacing.

Finally, set-top boxes running through CRTs won’t look as good as an analogue picture through the CRT. You’re converting digital to analogue, you’re losing all the advantages of digital broadcasts, but getting none of the benefits of analogue (except the extra channels).

No, digital on a CRT looks better than analogue on a CRT. You lose none of the advantages of a digital broadcast on a CRT other than the high resolution, but at the size of the average CRT you can’t tell the difference between high and standard definition.

I have to agree with @Philip. We have a Sony 80cm Analogue (it cost an arm and TWO legs when new) TV and it gives an excellent picture when there is good reception. However watching the ABC via a digital tuner DVD is much better than watching it directly from arial.

We do have an issue with some shows though that are obviously broadcast in widescreen format. The TV chops off the edges and we lose a bit on each side. This is usually only noticeable on subtitles or Alan Kohl’s graphs.

The problem is that a few years back all the broadcasters heavily increased their compression levels to fit a few extra channels each (hence we all had to rescan everything in). Fast moving scenes, and scenes with high levels of detail (say grass), break down very very quickly. Even under best circumstances this wonderful level of compression looks looks atrocious when you exceed 50″ in size.

Bring on MPEG4 (last I heard we are slated to switch to it around 2020ish) which will give the broadcasters their higher compression but with far higher quality – MPEG2 hasn’t cut it in a long while.

Those getting Freeview via Satellite already get this BTW – personally I’d (unofficially) switch over to that if it weren’t for my TiVo (wife loves it, so stuck with it), so I make use of satellite feeds for specific items where I cannot tolerate what Freeview transmits (e.g. V8 races).